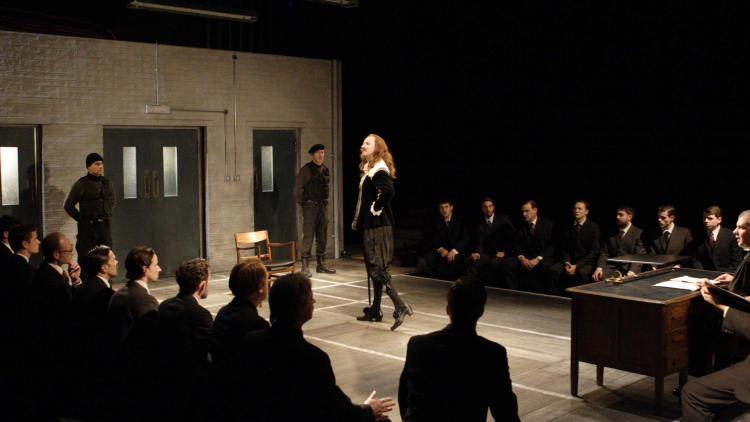 Director Nina Raine and Designer Ruth Sutcliffe have announced their plans to transform the Hampstead Theatre Main Stage into the round for Tiger Country, based on award wining Designer Lizzie Clachan’s critically acclaimed 2011 design.

Ruth says ‘It was vital to emulate the feeling of being at the heart of a busy London hospital, to transport the audience straight into the hustle and bustle of a ward or the intense closeness of an operating theatre. The versatility of Hampstead’s Main Stage will allow us to evoke this intimacy and busyness by transforming the auditorium into a traverse configuration meaning the audience will be surrounding the action on both sides. Nina and I aim to create a totally immersive and true-to-life experience through the design and direction of Tiger Country.

Theatre in traverse means that the audience will surround the stage on either sides. This offers a greater intimacy between performers and the audience – more so than a proscenium layout.

Hampstead Theatre has a modern auditorium, which has been designed to be as versatile as possible in both staging and seating configurations to allow the Director and Designer to work creatively and imaginatively. Our seating capacity can range up to 325 in a variety of formats. Movable seating blocks allow for the auditorium to be changed from a traditional end-on configuration with a raised stage, to thrust, traverse or in the round layouts.

Previously, Beth Steel’s epic play, Wonderland, set during the 1984 Miners’ Strike, was staged in an atmospheric round configuration and hit musical Sunny Afternoon featured an impressive catwalk extending out to middle of the stalls. Howard Davies’ 55 Days was staged in the traverse, where the audience played the jury in the trial of Charles I (played by Mark Gatiss). Unforgettably, Chariots of Fire was staged in the round to great critical acclaim with actors literally running circles around the audience. Such layouts present exciting opportunities to engage audiences in unusual ways.

‘Hampstead Theatre has been reconfigured in the round with a spectacular environmental set from Ashley Martin-Davis that’s dominated by a mighty pit shaft and a cage lift. You feel as though you have been plunged down to the coal face.’ The Independent on Wonderland

‘It’s hard to ignore shades of Julian Assange in Douglas Henshall’s resolute Cromwell, while the filing cabinets that line Ashley Martin-Davis’s traverse stage suggest our own rifling through records to right past wrongs’ Financial Times on 55 Days