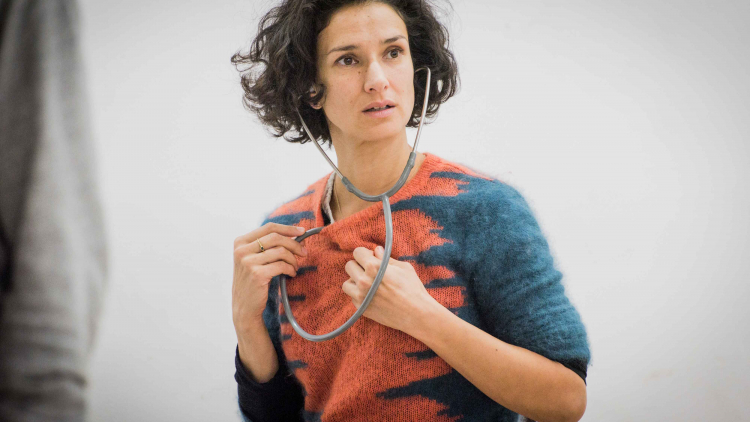 From Game of Thrones to Silk, computer games to her current role in Nina Raine’s Tiger Country, Indira Varma has worked across a lot of different media to play very different roles. Here, she gives us an insight into researching a role and the best bit of advice Harold Pinter ever gave her…

You’re playing a surgeon in Tiger Country. How have you researched that character?

We’ve had consultants come in and talk to us; one actually did the scene with us. I’ve also watched a couple of operations. I watched a circumcision on a really poor penis. An infected cock, basically, because I’m playing an urologist. The character does say, “If it’s not a willy, I don’t know what to do with it.

I didn’t take notes. I wasn’t there to learn the academic side so much – what they were using, the names of all the instruments – it was more to get a sense of the atmosphere, the energy level, the relationships between people and the hierarchy. I was impressed by the respect for the patient; what is basically an unconscious body.

There’s a book called Direct Red, by a woman called Gabriel Weston. It’s about her experience as a surgeon.

Are you quite a research-heavy actor?

Research is the privilege of someone who’s been told they’re going to do that job in three months time and has the money to do it. But obviously, you can always read loads.

I played a war correspondent once and met real female war correspondents as well as reading loads of biographies. I’d love to be like one those Hollywood stars and learn to be a blackbelt in judo for a film they’re doing.

When I’m doing an adaptation of a book, I always read the book, because it often includes details that might be lovely clues for you to play, but that aren’t in the script. But I wouldn’t watch a film of a play I’m doing.

You can get very hung up on things, like, “Oh, I don’t know how to hold this fork properly”. But if you believe that you’re holding it properly, the audience will go with it. Ultimately you’re telling a story, and the story’s not necessarily about that fork. If the story is about that fork, then do find out how to use it. But if it’s about the awkwardness around the dinner table then forget the fork – get on with the interesting bit.

Do you have any advice on entering an established series, like Game of Thrones?

It’s really intimidating. Game of Thrones isn’t British, although there are lots of British people in it. So I was bringing lots of preconceived ideas about what to expect. I expected the worst; that I’d be totally left behind.

But you have to follow your instincts and be open. If you’re open you’ll meet people with your sense of humour. Also, the Americans are good at saying, “Hi, I loved your work in bla bla bla”. I don’t know if they’ve actually seen your work or just read your CV but I’m thinking, “Oh my God I don’t even know what your name is. Shit.”

Do you have any advice on living with or being in a relationship with another creative person?

We [her and her partner, the actor Colin Tierney] met on a job, but haven’t worked together since. Actually there was one occasion when he was playing Hamlet at Bristol Old Vic and there was a chance that I’d get seen to play Ophelia, but he was quite wary and I thought, fair enough.

Sometimes it’s really fun to ask for advice and share your passion. There’s no professional jealousy between us, although that can exist.

It’s fun. My character wasn’t finished when I did the recording but I got to see images and a trailer of what the world would be like. They wanted to find the voice, so I tried things out – changing the accent, the pitch, the tone.

But you’re reading completely random lines. “She’s over there!” or “Harder!” There’s no real narrative so it does get quite confusing.

Also, you’ve worked with Harold Pinter. What was he like?

Once when I was struggling in rehearsal he said, “If you’re truthful, nothing you do is wrong.” Of course, that has to be within the limitations of the play but it was the most liberating thing to be told.