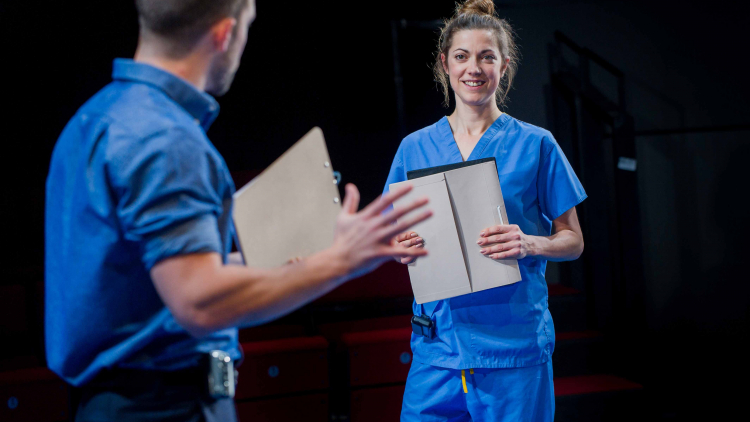 I’m going to hospital a lot at the moment,” an elderly woman sitting next to me confided during the interval of Nina Raine’s needle-sharp play about the NHS. “It makes you a bit worried, doesn’t it?” Though I didn’t say it, yes, actually, it does.

First staged at Hampstead in 2011, now rewritten and revived in a production that’s again directed by Raine herself, Tiger Country is enough to drain the colour from the face of anyone braving the palpitating heart of our health-care system. Instances of mishaps, oversights, staff shortages, deficient equipment, defective temperaments and deaths abound, as it tries to evoke hospital-life with a more probing quest for the truth than you get on soaps like Holby City and Casualty.

That’s not to say that it ends up resembling a dossier of damning evidence or the sort of exposé that would grace a front-page. Firstly, it allows considerable room for passing comedy; and secondly, Raine, who has researched the subject first-hand, in detail, is interested in underlying structures not the sort of pre-fab clichés that invite political point-scoring.

She alights on the paradox that the NHS functions better by admitting that it’s fallible; and that the best way of caring for patients might lie in learning not to care too much or the human cost is too great.

The emphasis throughout is on the staff and how they come to terms with this disillusioning state of affairs. Patients, slabs of meat to surgeons, figure in mainly non-naturalistic ways, conjured by our imaginations when the medics, dressed in surgical kit, gather round trolleys and perform tense, tightly drilled procedures.

The 14-strong cast serve the fast-trundling script with unflinching dedication, hustling and bustling in and out of a mock-up hospital environment that ranges the audience on either side as if at an old operating theatre.

Indira Varma stands out as the single, sexless and driven urology registrar Vashti, slowly winning your admiration as her reserve starts to make sense as a means of self-preservation. Her counterpoint is Ruth Everett’s Emily, a newcomer to the world of A&E, who knows gut-instincts are good, but can’t then stop her emotions from spilling out – engulfing her relationship with her charming, level-headed medic boyfriend James.

A shot of gloom for the festive period? Yes, but while this NHS check-up isn’t the jolliest show in town, it flaunts the fact that Hampstead is now in rude good health.