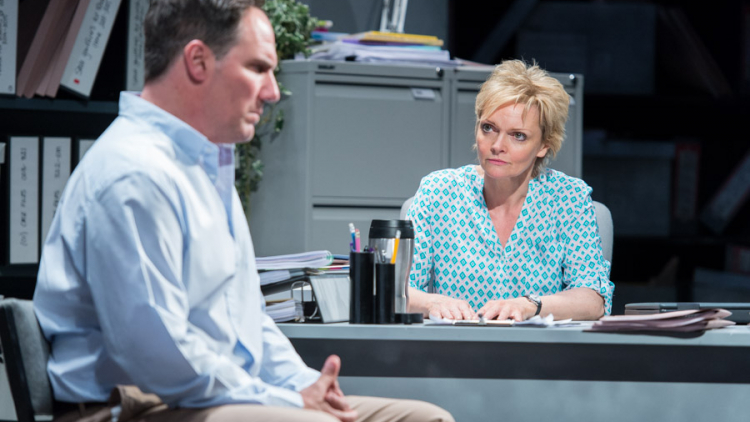 As she prepares to star in Hampstead Theatre’s Luna Gale, the Muswell Hill resident tells Bridget Galton how the theatre is offering her juicier roles in her 40s.

It’s a dilemma familiar from countless tragic headlines about the missed chances to save an abused child.

A six-month-old baby with drug addict teen parents is brought to hospital suffering from dehydration. A hard-pressed social worker must decide whether to remove her.

Rebecca Gilman’s prize-winning play Luna Gale may be set in Iowa, but it cannot fail to conjure comparisons with our own Baby P or Victoria Climbie.

Centring around jaded welfare officer Caroline, Gilman’s drama asks us to spare a thought for those making the toughest of decisions on a daily basis – often with the best intentions.

Sharon Small, who takes the role at Hampstead Theatre, says Gilman cleverly shows the complexity of this burden of responsibility by drip-feeding the audience details of the unfolding case as Caroline works it.

“It really builds as you follow a woman being presented with various social care situations, having to make a judgement call.

“The writing quickly twists and takes turns you don’t expect as information presents itself.

“No-one is right or wrong, no-one is vilified. It presents the moral and ethical arguments. But it’s not dry. It shows humans trying their best and sometimes failing.”

Drained by 25 years working in an underfunded system, witnessing families struggling with poverty and a dilapidated social fabric, Caroline is teetering on the edge of burnout following a mistake “along the lines of Baby P”

“She works on her instincts, while her new boss wants things done by the book. She’s a good improviser who can put a sticking plaster on things to make sure the case is propelled forward, but the system lets her and the clients down.”

Social workers, she says, often have to walk into threatening situations where no-one is on their side.

“She has over 90 cases but we only see her working on two.”

“It must be so stressful knowing you don’t always make the right decision but have to live with it anyway. The system really needs people like her, but she’s counting down to retirement.”

Presented with the baby’s grandmother – a devout Christian who condemns her own daughter as a lost cause – Caroline has to fight her own prejudices against such moralising attitudes,

“She has to decide have the parents neglected their daughter? Do they love her? Are they lost causes? The grandmother looks a good option but is very religious and argues about bringing Luna up in the right way, giving her a ‘better life’ – the same life her mother was brought up in but went off the rails.”

The Muswell Hill resident, a familiar face on TV in the likes of Sunburn, Mistresses and The Inspector Lynley Mysteries, says since hitting her mid 40s, theatre has offered juicier roles than TV.

While before she’d audition for parts calling for ‘a woman in her late 30s’ now she’s lumped into a pool of “brilliant actresses” ‘aged 40-55’ vying for a dwindling number of parts.

“I hit an age when there was less stuff to go up for in TV, but theatre has offered really cracking parts of late. For the RSC I played a woman having an affair with a younger man trying to murder her husband. She was crazy and sexy and it struck me it was about five years since I played a role on TV where I looked like I even had sex.”

That said, she is currently on BBC2 in an intriguing two-parter set in her native Scotland, based on Iain Banks’ thriller Stonemouth.

“It’s a small but pivotal role as the wife of Peter Mullan one of two warring affluent drug families.”

Her real life partner, photographer Dan Bridge, became a house husband after their two sons were born to enable her to continue her career. The family live near Albert Road Recreation Ground in Muswell Hill, where Small says the local community is “lovely”.

“He still moans, ‘Are you not done yet?’ but he loves it. Having boys, it’s worked out well that they had so much contact with their dad. Though not having a daughter means I sometimes feel I’m talking to myself and wish there was the occasional, ‘Mummy did you buy that? Can I go to ballet? Will you do my hair please?”

In the meantime she feels lucky to be back in theatre, working on a UK premiere of a new play.

“So much of drama is about making money, so they are going to chose subject matters which appeal widely. The social care system isn’t very attractive to get bums on seats.

“But we need writers to put on what’s going on in the world. In TV really complex arguments are not often allowed to happen unless they can be done visually, but theatre is a great platform for a dialogue.”