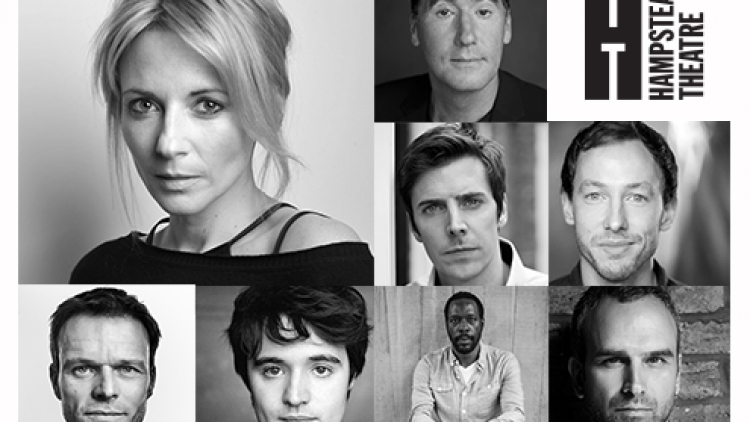 “I can’t remember which side I’m supposed to be working for, and it is not in fact necessary for me to know…”

Lisa Dillon plays Hapgood. She trained at RADA and her theatre credits include The Roaring Girl, The Taming Of The Shrew, Othello (RSC), Happy New (Trafalgar Studios), Birthday (The Royal Court), Design For Living, A Flea In Her Ear (Old Vic), The Knot Of The Heart, When The Rain Stops Falling, A Period Of Adjustment, Hedda Gabler (Almeida), Under The Blue Sky, Private Lives (West End), Present Laughter, The Hour We Knew Nothing Of Each Other (National Theatre), The Master Builder (West End) and Iphigenia (Sheffield). Film and television credits include Suffragette, The Beat Beneath My Feet, Bright Young Things, Stan Lee’s Lucky Man (Sky), Black Work, The Jury (ITV), Dirk Gently (BBC3), Cranford, Hawking and Cambridge Spies (BBC). Radio credits include Dr No, Goldfinger, On Her Majesty’s Secret Service and Diamonds Are Forever (R4).

Tim McMullan plays Blair. Tim’s theatre credits feature over 15 shows at the National Theatre including Man and Superman, The Cherry Orchard, Burnt by the Sun, Coram Boy, Dark Materials and The Three Sisters; and he is an associate of Complicité with who his work includes The Master and Marguerita, Mnemonic and Three Lives of Lucie Cabrol. Other theatre credits include Fathers and Sons (Donmar Warehouse), A Midsummer Night’s Dream (RSC), The Misanthrope with Keira Knightley (Comedy Theatre, West End), King Charles III (Wyndham’s Theatre), and As You Like It (Glove Theatre). Film credits include The Woman in Black, The Queen, Shakespeare in Love, The Fifth Element and Shadowlands. Recent television credits include Dr Thorne, Grantchester II, The Go-Between, Foyle’s War (in which Tim played the MI5 agent, Valentine, for two series), The Hollow Crown: Henry IV: Parts 1 & 2, and Parade’s End.

Tom Stoppard’s most recent play is The Hard Problem. His plays include Rosencrantz And Guildenstern Are Dead, The Real Inspector Hound, After Magritte, Jumpers, Travesties, Every Good Boy Deserves Favour (a play with André Previn), Night and Day, The Real Thing, Hapgood, Arcadia, The Invention Of Love, The Coast Of Utopia, Rock’n’Roll, Indian Ink, Dogg’s Our Pet, Dirty Linen, New-Found Land, Dogg’s Hamlet and Cahoot’s Macbeth. Translations and adaptations include Tango, Undiscovered Country, On The Razzle, Rough Crossing, Dalliance, The Seagull, Henry IV, Ivanov, The Cherry Orchard, The House Of Bernarda Alba and Largo Desolato (Havel). He has written eight Evening Standard award-winning plays and five of his plays have won Tony awards.

Radio plays include Darkside (with Pink Floyd), If You’re Glad, I’ll Be Frank, Albert’s Bridge (Italia Prize Winner), Where Are They Now?, Artist Descending A Staircase, The Dog It Was That Died and In The Native State. His most recent work for BBC television was Parade’s End (Ford Madox Ford), and his original television play Professional Foul won awards from BAFTA and the Broadcasting Press Guild.

Screenplays include Anna Karenina, Despair, The Romantic Englishwoman, The Human Factor, Brazil, Empire Of The Sun, The Russia House, Billy Bathgate, Poodle Springs and Shakespeare In Love (with Marc Norman), which won him an Academy Award for Best Original Screenplay, a Golden Globe, the Broadcast Film Critics and American Guild Awards for Best Screenplay 1998. He directed and wrote the screenplay for the film of Rosencrantz and Guildenstern Are Dead, which won the Prix d’Or at the Venice Film Festival 1990 for Best Film.

Howard Davies has been Associate Director for the National Theatre, Almeida Theatre and the RSC. He established and ran the Warehouse Theatre for the RSC.