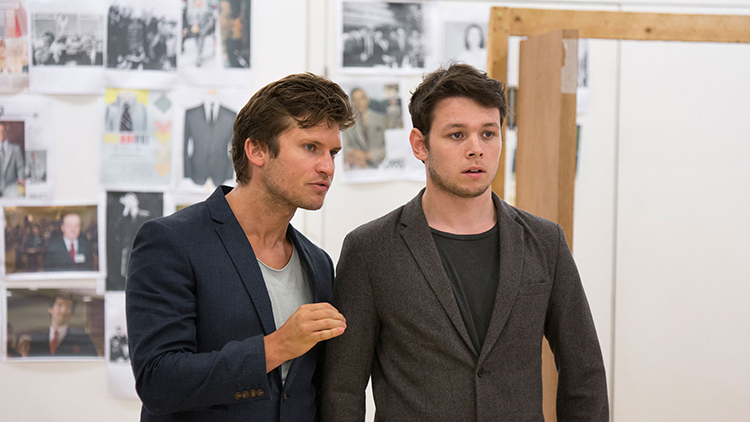 We're thrilled to share with you an exclusive extract from Beth Steel's compelling new thriller, Labyrinth. The play is yet to be published, so this is your only chance of a sneak peek before the show opens on our Main Stage on 1 September.
Image: Tom Weston-Jones (Charlie) and Sean Delaney (John) in rehearsals.

Charlie is practising, his caddie offering him different clubs.

John, not dressed for the game, a little breathless and sweating, appears.

Charlie            Textbook? You’re in the real world now. This is a country the size of a continent, not a factory in Cleveland. Countries don’t go bankrupt. Their infrastructure doesn’t go away, their natural resources don’t go away. Their assets always exceed their liabilities. The only thing left to do now is   write a rosy risk report for Howard and the committee that will push it through. Keep it brief and bland. The blander the better.

Charlie gets back to his golf.

Charlie          Just play by the rules, okay. That’s how the money’s made. Relax. Bottom line. We’re not evaluated on how accurate our reports are. We’re evaluated and paid on how many loans we make.

Charlie          Are you a moron? Or are you just out to piss me off? The committee doesn’t approve a loan on the basis of a report. The committee approves a loan because if they don’t, another bank will.

Charlie         I’m not saying they don’t look at it. I’m saying me and you play less of a role in this thing than you think.

Charlie         Be careful now. Be very careful. Do you want to use that word? Do you want to say that word aloud? Let me tell you something first. About the power of words. You know, the Egyptians believed that speaking and writing was an act of creation. That when they spoke something aloud or wrote it down they brought it into being. It became real. And though crazy, we haven’t really moved on from that. We do not speak of what we fear most, as we may articulate it into being. We do not speak of what we fear lest we bring it into being. We speak of our hopes as often as we can. To speak is to create. So think very fucking carefully about what you’re about to create.