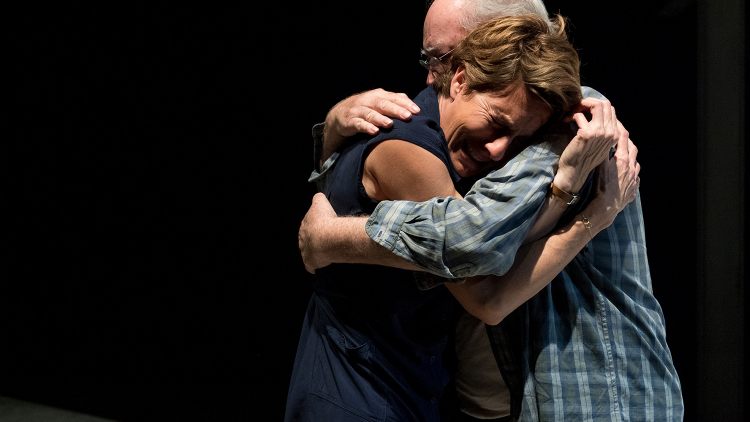 Here's a roundup of what the critics had to say about Tony Kushner's iHo, playing on our Main Stage until Saturday 26 November.

'Its full title reveals a lot: this is a work about sex, politics and religion. While it bulges at the seams, it is bracing, in an age of mini-dramas, to find a play that throws in everything from Marx to modern materialism.'

'The play, which makes constant use of overlapping dialogue to convey family tensions, has a furious energy and deals with the disillusion in an Italian-American community, and by implication a whole society, whose dreams have not been realised.'

'Kushner’s play, which is both vivid and untidy, is given a terrific production by Michael Boyd. David Calder’s Gus has the right mix of gravitas and rumbling embitterment. Tamsin Greig as Empty is sharp, witty and passionate in her gradualism and there are equally strong performances from Richard Clothier as the chronically indecisive Pill and Lex Shrapnel as the recklessly impulsive V. But the performance that draws the eye in this tumultuous family battle is that of Sara Kestelman as the ironically watchful Clio.'

To read the full review click here to visit the Guardian online.

'As Leo Tolstoy almost said: “All happy families are alike; each dysfunctional family is dysfunctional in its own way.” Folks, meet the Marcantonios, a bunch of Italian-descendant Americans who have so many axes to grind, and simmering resentments to boil, you feel they’re in urgent need of a group counsellor or perhaps tabloid talk-show host.'

'There’s his history teacher son Pill, whose marriage to African-American theologian Paul is on the skids, thanks to Pill’s consorting (with money not his own) with a millennial rent-boy called Eli. There’s Gus’s bisexual labor-lawyer daughter “Empty” whose theology partner Maeve is about to give birth. The respective sperm-donor is the youngest sibling, a building-contractor called V, whose anger-management is so poor that at one point he rams a bust of Garibaldi through the kitchen wall. The quietest of the bunch is Gus’s sister Clio, a former Maoist and member of the Peruvian militant group Shining Path who – in Sara Kestelman’s serene, feline performance of tolerant watchfulness – is almost a beacon of sanity.'

'What’s striking as ever is Kushner’s dramatic ambition and intellectual elan and the evening, moving towards dark pathos as the method of self-slaughter is confronted, is directed with great style by Michael Boyd on a monumental cross-section of a three-storey house, designed by Tom Piper.'

'Among a cast of almost uniform excellence, primary plaudits should go to David Calder as the suicidal patriarch, sometimes intensely present, fists clenched, blood flushing to his face, at other times self-absenting, pitiable. Tamsin Greig is uptight yet graceful thoughtfulness personified as Empty, needle-sharp with her comic timing but far beyond relying solely on that. And there’s terrific work too from Richard Clothier as the haunted Pill.'

'After a faltering first scene or two, Tony Kushner’s new play becomes one of the most absorbing dramas on the London stage. The Intelligent Homosexual’s Guide to Capitalism and Socialism with a Key to the Scriptures, or iHo, is a giant, fiercely argued investigation of American family life and leftwing politics. The title tips its hat to Bernard Shaw. The profession of its paterfamilias – he is a retired longshoreman – nods at Arthur Miller’s A View From the Bridge. Debates race through the dialogue: forensic, but firmly rooted in character.

To read the full review click here to visit The Observer online.

'An angel doesn't come crashing through the ceiling here as happens in his masterpiece, Angels in America, which will be revived by the National Theatre next year. But a bust of Guiseppe Garibaldi, the Italian nationalist, does get punched into the wall, leaving a gaping hole, during one of the Marcantonio family's many voluble rows in this latest Tony Kushner work which was unveiled in Minneapolis in 2009 and now, several drafts on, receives its British premiere in Michael Boyd's extremely adroit and passionately acted production at Hampstead.'

'The new three-and-half-hour piece (its snappy moniker fuses the titles of works by Shaw and Mary Baker Eddy) is firmly set in 2007 in a Brooklyn brownstone and conducts its examination of the state of the American left from within that country's great tradition of brutal, realist family drama which embraces Eugene O'Neill and Arthur Miller.'

'Tamsin Greig turns in a deeply intelligent and subtly anguished performance as the lesbian turned labour lawyer who has to cope with her father's eventual insistence that his declaration of suicide is not the despairing response of an idealist to a world he no longer recognises but a political act to galvanise them back into revolutionary radicalism. Sara Kestelman gets the most appreciative laughs with her softly-spoken put-downs as Gus's provokingly serene and wise sister who has been a nun, a Maoist and a shining path follower in Peru.'

'This is a massively stimulating evening, well worth the investment of time.'

Review: The Intelligent Homosexual's Guide to Capitalism and Socialism with a Key to the Scriptures

'The title of Tony Kushner's latest play knocks it out of the park in the length department. The play itself doesn't fare so badly in those stakes either – at three and a half hours, with two intervals, it's a little daunting. But, lest we forget, this is Pulitzer-winning Kushner – also responsible for the masterpiece Angels in America. His new play may be long and wordy, but it's also really good.'

'Kushner's dialogue is packed and furious, but it's beautifully constructed. There are nods to several of the great American family plays – All My Sons, A View from the Bridge – tied up within it, but this is very much a 21st century work which sets out to reflect what has become of us. His humour is both raucous - almost slapstick at times - and more subtle... the piece is meaty and brilliant.'

'David Calder as Gus is a rock at the centre of choppy waters. He is grumpy and loud and full of brash love for his kids. Greig is restless, angry and unhappy as MT and her performance is superb, shot through with pain and anguish at the thought of losing her dad, but realistic and ruthless too. There's great work elsewhere including a splendid Kestelman as the enigmatic and wise Clio and a very impressive Luke Newberry as Eli, PL's young lover.'

'Boyd's careful, steady hand is clear in everything; he manages to stage a complex, knotty, angry play with great grace and agility. It zooms through its three and a half hours.'

Review: The Intelligent Homosexual's Guide to Capitalism and Socialism with a Key to the Scriptures

'About halfway through Tony Kushner's new play, an almighty argument erupts among an Italian-American family who has gathered at the Brooklyn brownstone of their former longshoreman - and now suicidal - dad.'

'[Tamsin Greig] vanquishes any suggestion she's most at home playing comedy with a lynchpin performance as a devoted labour lawyer.'