A Cup of Tea with... Labyrinth's Abubakar Salim 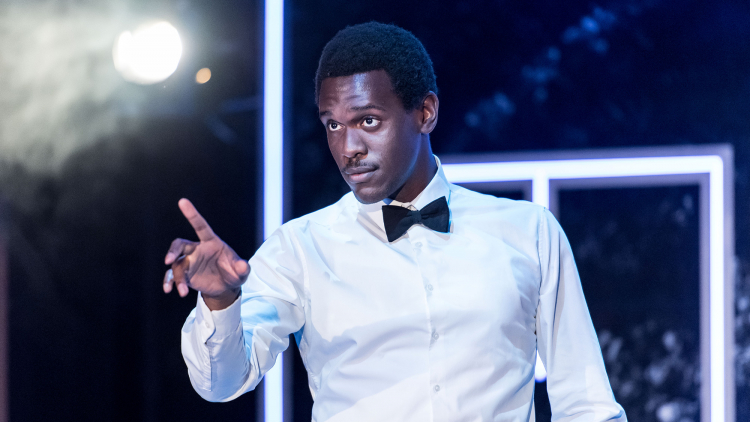 We chat to Labyrinth actor Abubakar Salim about Beauty and the Beast, Batman and the importance of flossing. Labyrinth is now playing until 8 October.

A "modern" myth of Icarus.

The clarity of the way in which banking is used as a tool to convey a much deeper issue that we suffer from as a society. I loved how the play explored this, and does it so that it doesn't feel like you're in a lecture. You're not removed from it. You're in it.

'Everything has its price.'

That one day, I could be Batman...I mean I could say it was when I realised the power of storytelling and the effect that that can have on an audience member from whatever background, but the strongest pull was the idea that I could one day play (and be) Batman.

Intriguing people inspire me. I respect the work of actors as I feel they do have the power to open the eyes of the audience and make them reflect, but even then, a lot of it comes down to the writing. But I personally find my inspiration through the little idiosyncrasies of people around me.

Earliest memory would be me in front of my mum and dad, re-enacting the scene from Beauty and the Beast (Disney version) when Beast transforms into the prince. Parents weren't impressed but they didn't complain about it either so from that, I say it was a successful experience!

Batman. Or Dracula. I guess a Bat.

Any embarrassing moments on stage or on screen?

Funnily enough, it's happened on this show. Screwing up my lines and, as exiting, almost falling off the stage onto the laps of an audience member!

I would probably have been a programmer. I love computers and all the crazy things that come out of technology.

People, places and things. The acting, writing, design, just everything was incredibly on point. It's hard to lose yourself in a production when you know what goes on behind the scenes, but that play truly moved me.

Brush your teeth twice a day and don't forget to floss.