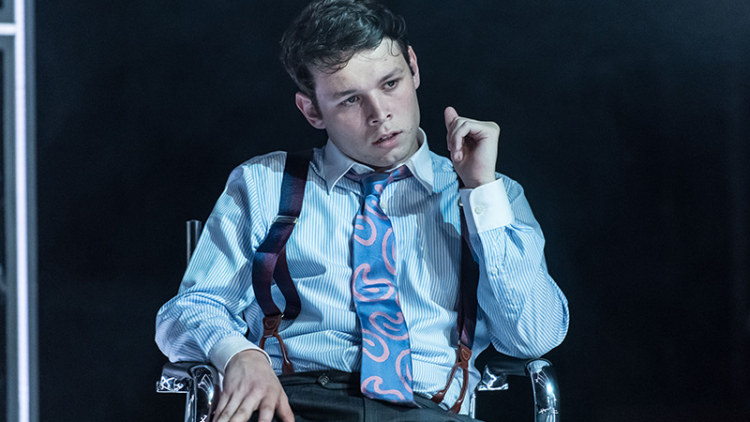 Here's a roundup of what the critics had to say about Beth Steel's compelling new thriller Labyrinth, playing on our Main Stage until Saturday 8 October.

'Beth Steel scored a big hit in 2014 with Wonderland... In Labyrinth, she again goes back to the 1980s, this time to probe the Latin American debt crisis. The result is a racily exciting work'

'Played on a wide traverse stage, Anna Ledwich’s production has a hurtling energy... Sean Delaney as John has the right air of a Candide-like innocent slowly succumbing to the system. Tom Weston-Jones as his Mephistophelian mentor exudes a narcissistic hedonism and there is high-grade support from Philip Bird as John’s dodgy dad and from Elena Saurel as a journalist who sees the ruinousness of reckless loans.'

To read the full review please click here to visit The Guardian online.

'It explores this through the contradictions of its central character, played by very bankable-looking newcomer Sean Delaney, fresh out of Rada.'

'The cast make the Mamet-like most of the zinging script, with assured work from Martin McDougall as the yo-yo spinning, boots-on-table bank exec, Elena Saurel as a canny economics journalist and a trio of Latin American government honchos played by one actor (Joseph Balderrama).'

To read the full review please click here to visit The Telegraph online.

'There’s a great vroom vroom to this play, an energy that lifts it out of the ordinary. The director Anna Ledwich keeps mixing things up... Jagged music discombobulates, people appear out of nowhere, some scenes are paranoiac, others full of fire-in-the-blood swagger.'

'All of the acting is good and the set, by Andrew D Edwards, is arresting. The stage is in the centre, with the audience on both sides... It’s ingenious, slick and perfect for this.'

To read the full review please click here to visit The Times online.

Seventies bankers are back with a vengeance in Labyrinth
★★★★
PATRICK MARMION, DAILY MAIL

'Steel is the author of Wonderland, Hampstead Theatre’s previous hit about the miners’ strike. Once again she wears her research lightly, painting a rogues’ gallery of top-of-the-range spivs in a world of sex, drugs and sub-prime loans.'

'Anna Ledwich’s production enters fully into the carnival spirit... It also sets up a story which is in thrall to these glamorous lowlifes... a great night out.'