CELL MATES: ★★★★ FROM THE INDEPENDENT 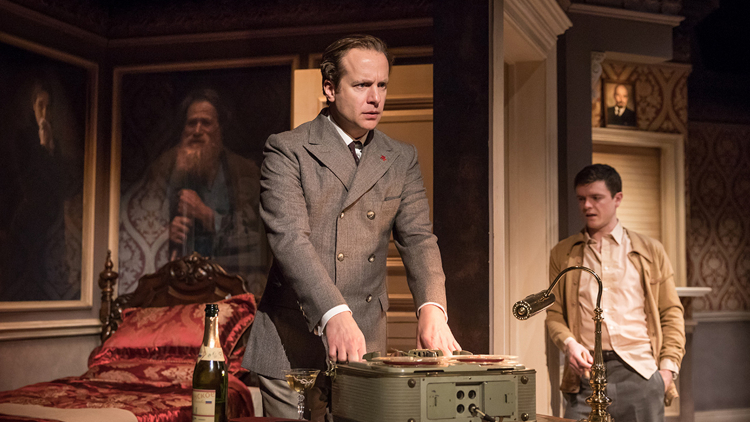 'Edward Hall's production proves to be a salutary vindication of Gray's wit and artistry, bent here on the subject of spies and betrayal and on the various types of loneliness to which one one can be convicted.  “Spies betray people. That's what we do. It becomes a – a habit.  Difficult to break – even when its not – not strictly necessary”. The play begins in Wormwood Scrubs in the 1960s where George Blake, a notorious double agent (and later speaker of those lines), is serving a forty-two year sentence. He strikes up an unlikely friendship with Irish petty criminal Sean Bourke who, in 1966, helps him to spring the prison, with a hacksaw and a rope ladder.'

'In this production, the resulting ironies have real bite and an expertly-timed slow-release intensity. Blake, the ex-lifer, effectively puts under psychological arrest the man to whom he owes his freedom, deviously creating the false impression that he has been put under life sentence by the KGB who suspect him of being a double agent. The ultimate irony is that even now, as the victim of subterfuge in his Moscow captivity, Bourke is, in human terms, the freer man.'

'In a remarkable performance, Geoffrey Streatfeild elicits sympathy for the loneliness of Blake in his ideological prison and excites repelence at his ruthlessness.  E M Forster famously said that if he were asked to betray his country or his friend, he hoped he would have the guts to betray his country.'

'Emmet Byrne superbly signals the way Bourke is driven to believe in his own anti-Establishment derring-do as the man who sprang Blake (his own means of escape – from ordinariness).  He's an engaging man who's also genuinely fond of the spy (until the later revelations) and his ferocious affection for home shows up Blake's purely theoretical attachment to Russia.'

'There's a sharpness to the writing and to the performances across the board. Philip Bird and Danny Lee Wynter are glumly hilarious as a couple of KGB heavies who fumble over the distinctions in English between “chap” and “chum” and “chump” in ways that throw droll light on the main relationship. Cara Horgan is delectable in a double as the Russian maid who duets with Bourke in his hammy renditions of “Danny Boy” for his captors and as the wife in a CND couple who have an inconvenient marital meltdown while helping Blake on his first night outside. Edward Hall is to be congratulated for rescuing this thoughtful odd-couple comedy from its unjust initial publicity.  An astute revival, strongly recommended.'

To read the full review click where to visit The Independent online.