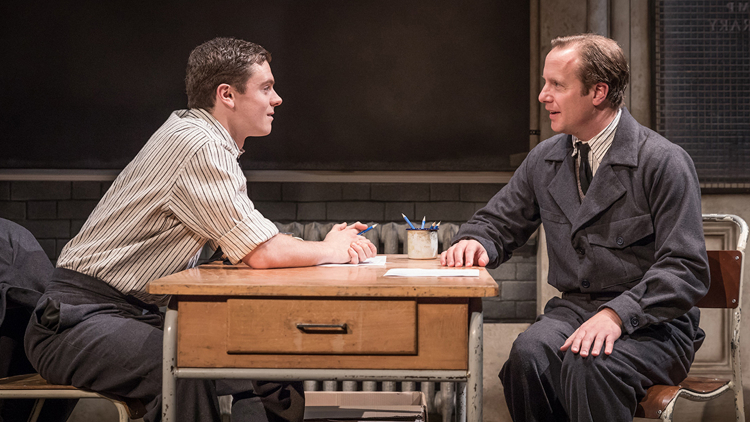 'This revival, directed by Edward Hall, is a chance to see clearly for the first time Simon Gray's play, without any drama surrounding it. It emerges gleaming, a wonderful reminder of just how good a writer Gray could be.'

'His rare ability to walk the tightrope between high farce and deep human understanding is constantly on display in this study of the strange relationship between the spy George Blake, and Sean Bourke, the Irish petty thief who, in 1966, helped him to escape from Wormwood Scrubs where he had been imprisoned for 42 years for treason.'

'In Hall's assured production, perfectly designed by Michael Pavelka so a little picture of Lenin lours over most of the proceedings, Geoffrey Streatfeild utters those words with a despairing mixture of impatience and sadness. It's a subtle performance, from the second he first appears, shoulders stooped, hands still at his sides as if to move will somehow give something away. His prissy, calm manner, and his knowing ways are undercut and brought into question by the constant range of emotions that flit across Streatfeild's face. He evokes sympathy for the man's loneliness in the same moment as he reveals his ruthlessness.'

'Alongside him, Emmet Byrne precisely catches the way Bourke is enslaved by his need to believe in his own cleverness. his anti-establishment spirit, his appetite for living. He makes Bourke's confusion and bafflement at what is happening to him as evident as the affection he continues to feel for Blake until their final showdown.'

'Their oddball relationship remains ultimately mysterious, but its twists and turns are charted in scenes that are audaciously funny as well as probing, and which are deftly played by a supporting cast of Danny Lee Wynter, Cara Horgan, and Philip Bird, each taking two parts.'

To read the full review click where to visit What's On Stage online.