Hayley Atwell to star in ... 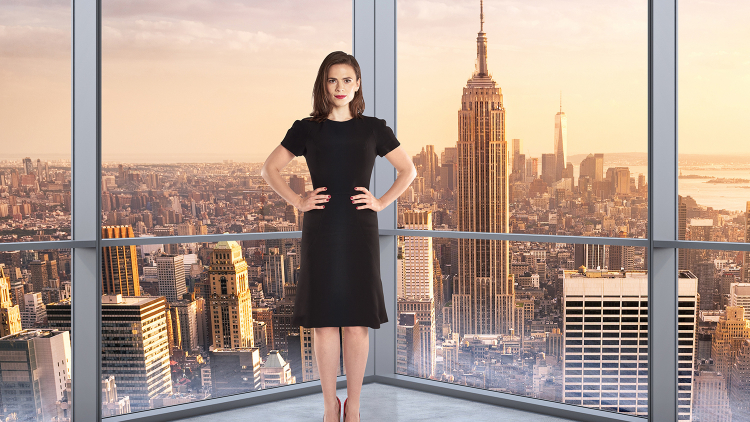 Hampstead Theatre presents the UK premiere of Sarah Burgess’ breathtakingly witty and virtuosic comedy, Dry Powder. Directed by Anna Ledwich, this production explores the vision, the vulnerability, and the vilification of those shaping - and skewing - the economy. Hayley Atwell will make her Hampstead Theatre debut as Jenny and she will be joined by Tom Riley and Aidan McArdle.

In the same week his private equity firm forced massive layoffs at a supermarket chain, Rick threw himself a lavish engagement party - which even featured an elephant - setting off a Public Relations nightmare. However, all’s not lost when you’re the titan of high finance – there’s still an abundance of cash in reserve and Seth, one of Rick’s partners, spots an opportunity to salvage the company’s reputation with an investment that’s both sound and PR-friendly. But Jenny, the third partner, and Seth’s nemesis, has other ideas: she’s not in business to make friends. If there’s money to be made, she’ll do whatever it takes to generate the maximum return, irrespective of what the critics might say…

Hayley Atwell plays Jenny. Her theatre credits include The Man of Mode, Major Barbara (National Theatre) and Prometheus Bound (West End). She has been nominated for two Olivier awards for her performances in A View from the Bridge (Duke of York’s) and in The Pride (Trafalgar Studios). Her television credits include the Agent Carter series, Howard’s End, Pillars of the Earth for which she received a Golden Globe nomination, Black Mirror, Any Human Heart, Restless and The Line of Beauty. Her film credits include Agent Peggy Carter in the Marvel movie franchise, Christopher Robin, Cinderella, All is By My Side, The Duchess, Brideshead Revisited and Cassandra’s Dream.

Tom Riley plays Seth. His theatre credits include Arcadia (Broadway), for which he was nominated for a Drama Desk Award, My City (Almeida Theatre), Paradise Regained, The Vertical Hour, Censorship, Victory, The Entertainer and The Woman Before (Royal Court Theatre). His television credits include Angie, Tribeca, Ill Behaviour, Dark Heart, The Collection, Inside No 9, Doctor Who, Da Vinci's Demons forwhich he won a BAFTA Cymru, Monroe, Twenty Twelve, Bedlam, A Bouquet of Barbed Wire, No Heroics, Poirot: An Appointment with Death, Freezing, Lost In Austen, Lewis, Casualty 1906 & 1907, Miss Marple - Ordeal By Innocence and Paparazzi. His film credits include Ghost Light, Starfish, Modern Life Is Rubbish, Pushing Dead, Kill Your Friends, St. Trinians 2, Happy Ever Afters, Return to The House on Haunted Hill, I Want Candy and A Few Days in September.

Anna Ledwich returns to Hampstead Theatre following the critically acclaimed Labyrinth. Her other Hampstead productions include Kiss Me, Donny’s Brain, The Argument and the Olivier Award nominated Four Minutes Twelve Seconds Downstairs. Her other credits include The Stick House (Raucous Collective/Bristol Old Vic) and Lulu (Gate Theatre/Headlong) for which she received the New Directions Award. She was awarded the Michael and Morvern Heller Director's Bursary at Chichester Festival and is an Associate Director at Theatre 503 and co-Artistic Director of Theatre on the Fly at Chichester Festival Theatre.

Further casting to be announced in due course.