A Cup of Tea with... Platinum's Laura Pitt-Pulford 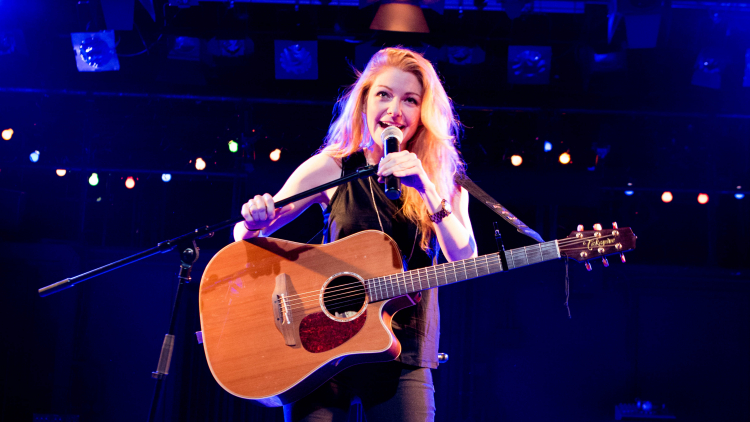 We chat to actor Laura Pitt-Pulford about Wind in the Willows, life advice and James Stewart. Laura is starring as Anna in Platinum, which runs until 14 January.

Welcome to Hampstead, Laura. You’re a couple of weeks into the run of Platinum – how is it going?

Really well, thank you. We're having a great time! It's a total joy working with George and Sian.

Can you describe Platinum in a nutshell?

It's a play that deals with a mother and daughter relationship and the friction between them. Something I think resonates with a lot of people. My character carries a lot of baggage which is revealed when she is paid a visit by PhD student Simon. From there the play unfolds.

Tell us a little more about your character Anna.

Anna is a recording artist currently working on her second album. Shes a strong, feisty woman and the daughter of a world famous singer. She feels like she is living in the shadow of her mother. She's a bit of a lost soul when we first meet her.

'I'd rather not know the stuff I know about Salvador Dali when I look at one of his paintings.'

People places and Things is a play that still lingers in my mind. Denise Gough was extraordinary! I imagine I'm not the first person to choose this.

I'd love to have been able to fall in love with James Stewart in It's a Wonderful Life.

Wind in the Willows playing Ratty. My mother dressed me in the tightest pair of white jeans imaginable and one of my dad's huge navy blazers. What can I say - it was a small budget!

So, so many! I've done the classic skirt tucked in knickers a couple of times. Also, working at Regent's Park you get used to stacking it on the stage quite a lot, usually due to the occasional rain and mud.

Dot in Sunday in the Park with George

I used to watch so many old movies as a kid dreaming I was in them. It wasn't until I actually set foot on stage (giving my Ratty, of course) that I realised this was what I wanted to do. Plus, I wasn't very good at anything else!

Be bold and go with your gut!