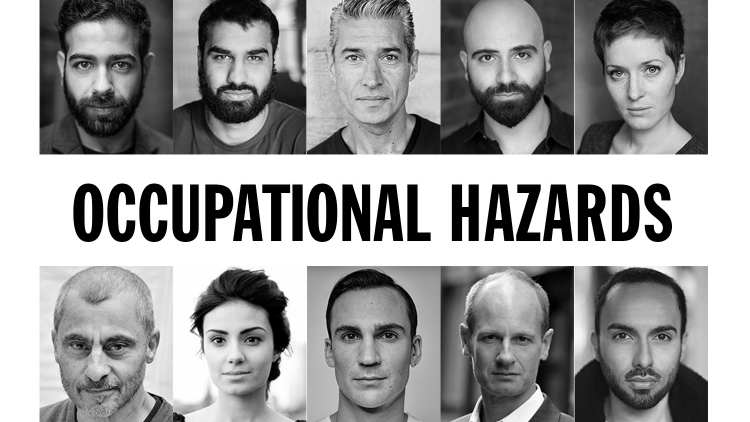 Hampstead Theatre presents the world premiere of Stephen Brown’s play Occupational Hazards, which is based on Rory Stewart’s critically acclaimed memoir of the same name. Directed by Simon Godwin, this new play tells an extraordinary story about the moral conflicts, the dangers and the comic absurdities inherent in any foreign occupation. Henry Lloyd-Hughes will play the role of Rory having last been seen at Hampstead Theatre in Nina Raine’s Tiger Country in 2011.

September 2003. Rory Stewart, a thirty year old former British diplomat is posted to serve as governor in a province of the newly liberated Iraq. His job is to help build a new civil society at peace with itself and its neighbours - an ambitious mission, admittedly, but outperforming Saddam should surely not prove too difficult…

Yet, freedom from repressive tyranny has allowed centuries of tribal conflict, sectarian tension and ethnic division to burst into the open once more.  These sharp local realities plunge Stewart into a dangerous whirlpool of political intrigue in which the double-dealing of opposing interest groups creates intensifying confusion and chaos.  As pressure for a settlement mounts from all sides he comes to realise that all politics is indeed local, and that Washington may have to rethink its dreams of Iraqi democracy.

Johndeep More plays Seyyed Hassan. His theatre credits include The Kite Runner (Wyndham’s) and East is East (The Birmingham Rep and UK tour). Film credits include Blue Line and Internal.

Stephen Brown scripted Filter Theatre’s sell-out hit Faster (BAC, London/Lyric Studio, London/UK tour/Frankfurt/59E59 Theater, New York).  His play, Future Me premiered at Theatre503 in London to wide acclaim, toured the UK and had US productions in Berkeley, CA and at the Public Theater, New York. The script is published by Oberon Books. Other work includes co-scripting Does My Society Look Big in This? at Bristol Old Vic, with Tom Morris and dramaturgy on Lost Dog’s Salvage (Corn Exchange Newbury / The Laban Centre / The Place). He has worked as a critic and journalist in print and on radio and as a book editor and translator.  He was publisher of the London-based political magazine Prospect. Stephen is currently under commission to the National Theatre and is developing a show with Bristol Old Vic.

Before being elected as Member of Parliament for Penrith and The Border in 2010, Rory Stewart worked in foreign affairs with a particular focus on military intervention and international development. After a brief period as an infantry officer in the British Army he joined the UK Diplomatic Service, serving overseas in Jakarta, as British representative to Montenegro in the wake of the Kosovo crisis, and ‎as the coalition Deputy-Governor of two provinces in the Marsh Arab region of Southern Iraq following the Iraq intervention of 2003; he was awarded the Order of the British Empire for his work in Iraq. On leave from the Foreign Service he walked for 21 months crossing Iran, Afghanistan, Pakistan, India and Nepal, staying in 500 village houses on the journey. He has written three books: The Places in Between, a New York Times bestseller, which describes his walk across Afghanistan in the winter of 2001-2002, Occupational Hazards, which describes his time as an administrator in Southern Iraq, and Can Intervention Work? with Gerald Knaus, an essay on military intervention. He has presented three BBC television documentaries: In Search of Lawrence of Arabia, Afghanistan: The Great Game, and Border Country: The Story of Britain’s Lost Middleland. Today, Rory is Minister of State at the Department for International Development (DFID) having previously been Minister for the Environment and Rural Affairs at DEFRA. After the devastating floods of December 2015 – January 2016, Rory was appointed as Flood Envoy for Cumbria and Lancashire, overseeing recovery efforts, and was Chair of the Cumbria Floods Partnership. Prior to becoming a Minister in 2015, he served for four years on the Foreign Affairs Committee, and in 2014 was elected Chair of the Defence Select Committee by all parties in parliament as the youngest ever Select Committee chair.