The Blitz: The Real Start...

The Blitz: The Real Start of Britain's Sexual Revolution 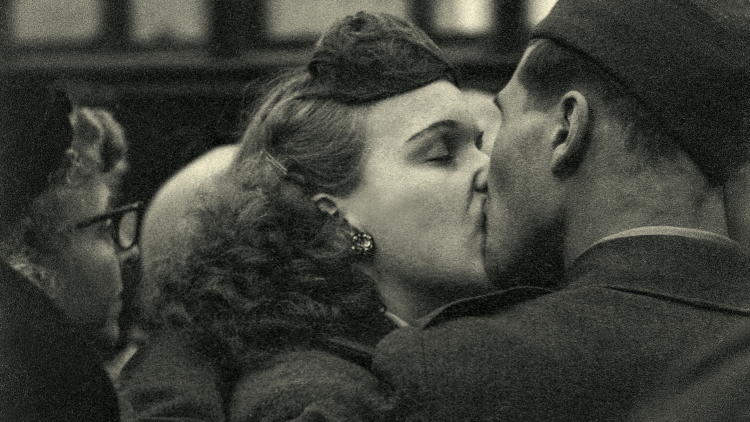 The Slaves of Solitude, by Patrick Hamilton, is a wartime novel that makes virtually no mention of the war. It deals, instead, with the shifting attitudes and behaviours on the Home Front. Nicholas Wright’s new stage adaptation, commissioned by Hampstead Theatre, introduces us to Miss Roach, a woman forced by the bombing of her London home to move to the Rosamund Tea Rooms boarding house in Henley-on-Thames. Bored and bullied by her fellow residents, her life is turned upside down by the arrival of a handsome American lieutenant.

Miss Roach is representative of all those millions of people trying to figure out how to live in wartime Britain. At one level, the country was rigidly conformist. People ate the same foods, wore the same clothes, volunteered for the same organisations, sheltered from the same raids, broke the same emergency laws, and evacuated to the same bomb-free areas. Classes, ages, and sexes mingled, leading sometimes to wide-eyed empathy and sometimes to the confirmation of old prejudices. But even as the war imposed restrictions, it also liberated people, gloriously, from themselves. 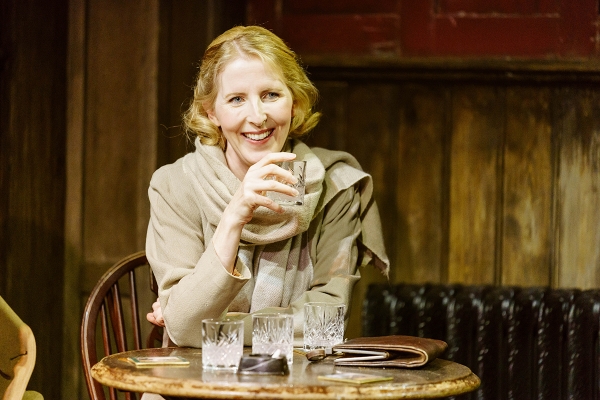 Living in the shadow of death and invasion, Britons everywhere grabbed hold of life. As a young schoolteacher from London wrote in her diary: ‘I live each day now as if was my last’. People took risks and tried new things. The Duchess of Marlborough worked in the kitchen of a Coventry homeless shelter. A criminal gang broke off from stealing a safe to rescue a child from a burning building. A young mother bought a hundred aspirins to feed her daughter when the Nazis came. And our Miss Roach, a polite middle-class publisher’s assistant, starts visiting pubs and arranging dates with strange men. ‘I hardly drank at all before the war,’ she says as she orders her fourth pink gin. ‘It’s all so different now.’

And it was so different. ‘As the opposite of death is life, I think I shall get seduced by Rupert,’ wrote a nineteen-year-old woman in her diary; a glance at the next page establishes that she kept her word. The war was an aphrodisiac – as writer Peter Quennell discovered during an encounter. ‘All night,’ he wrote, ‘fear and pleasure combined to provoke a mood of wild exhilaration. The impact of a bomb a few hundred yards away merely sharpened pleasure’s edge.’ Quennell and his lover were grabbing life in the face of death. And afterwards, as they lay together, they imagined themselves safe. If the fabled ‘Blitz Spirit’ involved the coming together of strangers, then Quennell was experiencing its most extreme form.

It is interesting to note that the number of illegitimate births in England and Wales jumped by over 10,000, and incidents of venereal disease rose by seventy percent, between 1939 and 1942. Before the Woodstock generation was even born, a genuine sexual revolution was underway. And if this revolution was fuelled by the fear of death, it was facilitated by opportunity. The blackout provided anonymity, while the departure of husbands provided temptation – particularly as it coincided with the arrival of large numbers of foreigners.

In 1939, less than three per cent of Londoners had been born abroad – and most of those came from Ireland. But the following year, Britain began receiving a sudden influx of Scandinavians, Belgians, Dutch, French, Poles, Czechs, Indians and West Indians. They came from countries overrun by the Nazis, from British colonies and dominions, and from other Allies. 125,000 Canadian troops arrived in Britain in the early part of the war, followed by almost two million American servicemen and women from 1942 onwards. It should hardly come as a surprise, therefore, that the man with whom Miss Roach becomes romantically involved is an American lieutenant.

Most people reading Patrick Hamilton’s novel will assume that the lieutenant is white – but, in fact, his race is never made clear, and the play’s director, Jonathan Kent, has made a fascinating choice in presenting him as African American. There will be those who question the authenticity of the choice – but it is valid. Around 100,000 of the United States servicemen who landed in Britain were African American, of whom a number were junior officers. The only black combat unit to take part in the D-Day landings, the 320th Barrage Balloon Battalion, had a complement of seventeen black junior officers. 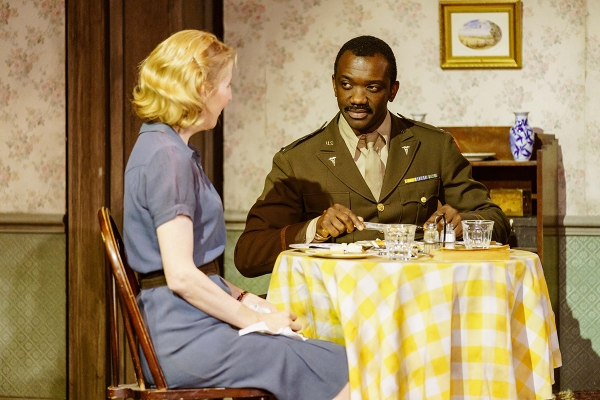 The casting decision also highlights a vitally important wartime story. African American servicemen, accustomed to degrading treatment at home, were surprised and delighted by the warm welcome they received from the British. Despite its many African and West Indian colonies, Britain had a very small black and mixed-race population, and segregation was unknown. But many white American soldiers, particularly those from the south, were furious to see their ‘inferiors’ invited into white homes, drinking alongside white people in pubs, and sitting wherever they liked on buses and trains.

One consequence was a proliferation of interracial fights on British streets. But another was a change in attitudes. William Henry Mackey Jr, an African American labourer from Georgia, was so inspired by the freedom that he resolved to move to New York after the war to seek new opportunities. He would eventually become a history professor.

Considered polite, exotic, and unfairly victimised, African Americans were popular with British people. The 320th Barrage Balloon Battalion was stationed near the play’s location – Henley-on Thames. It was not unusual, according to a local man, to see discarded women’s knickers on a fence post in a nearby clearing. But relationships were not limited to snatched encounters. So many British women fell for American soldiers that Congress passed a War Brides Act in 1945 allowing the largest single wave of female immigrants in American history to begin new lives in the United States. A relationship between Miss Roach and the lieutenant might have caused controversy – but it is entirely believable.

A final question though, is whether Miss Roach – and her real-life counterparts – held on to their hard-won freedoms after the war. Did they carry on drinking, having sex and grabbing hold of life? Certainly, the post-war authorities did not want them to. The Marriage Guidance Council was formed to return the country to old-fashioned values. It decried the wartime disintegration of family life and urged a return to chastity and fidelity. The Archbishop of Canterbury called for an end to sexual indulgence and the rekindling of Christian faith. The media fired off a barrage of articles urging women to leave the workplace and return to their traditional roles Even Noël Coward, in his 1945 film Brief Encounter, hinted that a line was to be drawn under this recent period of social and sexual misrule.

And to a great degree, this is what happened. The marriage rate leapt by fifty percent in 1946 and the decade that followed saw a backlash against the new freedoms. But those freedoms had been too widely tasted to be forgotten. The family values of the fifties duly gave way to the permissiveness of the sixties. And while the Woodstock generation may have thought they were inventing sex, they were, as The Slaves of Solitude reveals, following a wartime path.

The Slaves of Solitude is playing at Hampstead Theatre from 20 October until 25 November. The Secret History of the Blitz by Joshua Levine is available to buy from all major bookstores and on amazon.