FULL CASTING ANNOUNCED FOR THE SLAVES OF SOLITUDE 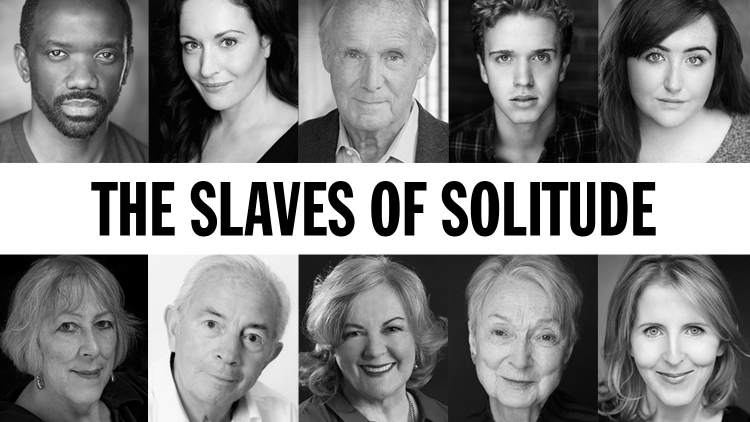 1943, Henley-on-Thames. Miss Roach is forced by the war to flee London for the Rosamund Tea Rooms boarding house, which is as grey and lonely as its residents. From the safety of these new quarters, her war now consists of a thousand petty humiliations, of which the most burdensome is sharing her daily life with the unbearable Mr. Thwaites.

But a breath of fresh air arrives in the form of a handsome American Lieutenant and things start to look distinctly brighter...  Until, that is, a seeming friend moves into the room adjacent to Miss Roach’s, upsetting the precariously balanced ecosystem of the house...

Lucy Cohu plays Vicki Kugelmann. Her recent theatre credits include Once in a Lifetime (Young Vic), Five Finger Exercise (The Print Room), A Delicate Balance (Almeida), Broken Glass (Tricycle Theatre), An Enemy of the People (Crucible, Sheffield) and Speaking in Tongues (Duke of York Theatre). Her television credits include Maigret, Ripper Street, Anais Nin, Broadchurch Series, Citizen Charlie, Atlantis and Forgiven. Her film credits include The Face of an Angel, The Inbetweeners 2, The Queen’s Sister, The Awakening, Becoming Jane and Gosford Park.

Clive Francis plays Mr Thwaites. His recent theatre credits include: Madness of George 111, Enron, The Hypochondriac, Thark, The Gathered Leaves and 84 Charing Cross Road. His work with the National includes: ‘Tis Pity She’s a Whore, A Small Family Business, Never So Good and Les Blancs. His work with the RSC includes: Three Hours After Marriage, Troilus and Cressida, The Hollow Crown and A Christmas Carol. His recent film and television credits include: The Little Stranger, The Lost City of Z, The Crown, Turner and The Missing. His has also written many adaptations for the stage including: A Christmas Carol, Three Men in a Boat. Our Man in Havana and The Hound of the Baskervilles. He has designed and compiled books including: Laugh Lines, The Many Faces of Gielgud, There’s Nothing Like a Dane! and There’s Nothing Like a Thane!.

Susan Porrett plays Mrs Payne. Her recent theatre credits include The Autumn Garden (Jermyn Street Theatre), The Heresy of Love (Shakespeare’s Globe), The Good Soul of Szechuan (Young Vic). Her work with the RSC includes A Dream Of People, The Art of Success, Macbeth, Worlds Apart and They Shoot Horses Don’t They. Her work with the National Theatre includes Anthony Trollope, Scrape Off The Black, A Month In The Country, Don Juan, Much Ado About Nothing and The Prince of Homburg. Her television credits include Mapp & Lucia, A Short Stay in Switzerland, Holby City, After Thomas, Foyles War and Midsomer Murders. Her film credits include About A Boy, The Parole Officer and The Escort.

Nicholas Wright returns to Hampstead Theatre following the sell-out hit The Last of the Duchess (Main Stage, 2011) and A Human Being Died That Night (Downstairs, 2013). His other plays include Treetops and One Fine Day (Riverside Studios), The Gorky Brigade (Royal Court), The Crimes of Vautrin (Joint Stock), The Custom of the Country and The Desert Air (RSC), Cressida (Almeida Theatre at the Albery), Rattigan’s Nijinsky (Chichester Festival Theatre), Travelling Light, Mrs. Klein, Vincent in Brixton and The Reporter (National Theatre). He adapted His Dark Materials (National Theatre), and wrote versions of Naked and Lulu (Almeida), John Gabriel Borkman, Three Sisters (National Theatre) and Thérèse Raquin (Chichester Festival Theatre and NT). His adaptation of Pat Barker’s Regeneration was produced in Northampton and on tour in 2014.His opera libretti include The Little Prince (Houston Grand Opera) Man on the Moon (Channel 4) and Marnie (ENO 2017 and New York Metropolitan Opera 2018); television credits include Armistead Maupin’s More Tales of the City (Channel 4) and three episodes of The No.1 Ladies’ Detective Agency (HBO/BBC). He wrote 99 Plays and co-wrote Changing Stages with Richard Eyre.

Patrick Hamilton was born in Hassocks, Sussex in 1904. He and his parents moved a short while later to Hove, where he spent his early years. He published his first novel, Craven House, in 1926 and within a few years had established a wide readership for himself. Despite personal setbacks and an increasing problem with drink, he was still able to write some of his best work. His plays include the thrillers Rope (1929) - on which Alfred Hitchcock's film Rope was based - and Gaslight (1939), also successfully adapted for screen in the same year. There was also an historical drama, The Duke in Darkness (1943). Among his novels are The Midnight Bell (1929), The Siege of Pleasure (1932), The Plains of Cement (1934), a trilogy entitled Twenty Thousand Streets under the Sky (1935), Hangover Square (1941) and The Slaves of Solitude (1947). The Gorse Trilogy is made up of The West Pier, Mr Stimpson and Mr Gorse and Unknown Assailant, which were first published during the 1950s. He died in 1962.