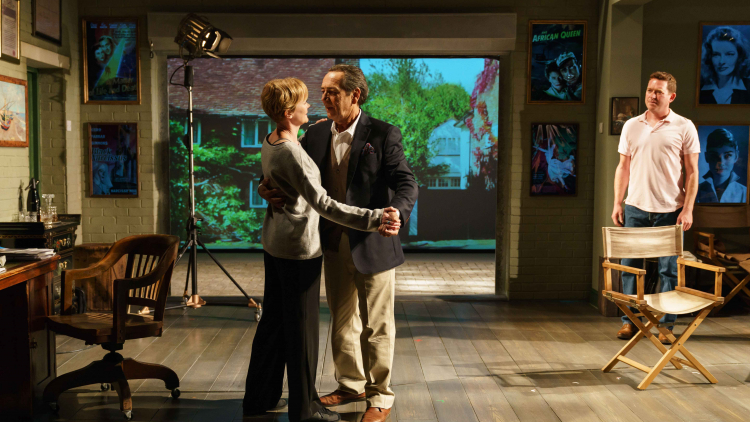 'You can’t blame My Family star Robert Lindsay for wanting to be British cinematographer Jack Cardiff. Who wouldn’t? Cardiff was the man who lit and sometimes loved such Hollywood greats as Marilyn Monroe and Katharine Hepburn, not to mention Audrey, Ava and Sophia too.'

'Writer Terry Johnson sidesteps the many traps of that most tedious of genres, the biopic, by concentrating on the final reel of the late, great filmmaker’s life. (He died in 2009.) Egged on by his son Mason (Barnaby Kay), and despite suffering from Alzheimer’s, Jack is writing his autobiograph.'

'To help his memory Mason has built a shrine to his father’s career in the garage of Jack’s home in Cambridgeshire. The room is dominated by the Technicolor movie camera with which Jack ‘painted’ such masterpieces as The Red Shoes and Black Narcissus.'

'It is in this man cave that Lindsay’s pugnacious Jack lives out much of what’s left of his life and relives its finest moments, mistaking his wife Nicola (Claire Skinner) for Hepburn or his carer Lucy (Rebecca Night) for Monroe.'

'Yet this is no maudlin melodrama about an old man losing his mind. Rather Lindsay’s Jack is always charismatic'

'Johnson’s plot inventively uses Jack’s condition to conjure vivid flashbacks. And the transition from Jack’s confused present to his triumphant past is superbly realised with the cast doubling or even trebling as Hollywood greats. Kay gets to be Bogart, Skinner is a wry Hepburn while Night’s luminous Monroe is as convincing as her vampish Lauren Bacall.'

'Meanwhile, Lindsay makes a plausible case for Jack as a man to whom the world’s most beautiful women were drawn like moths to light.'