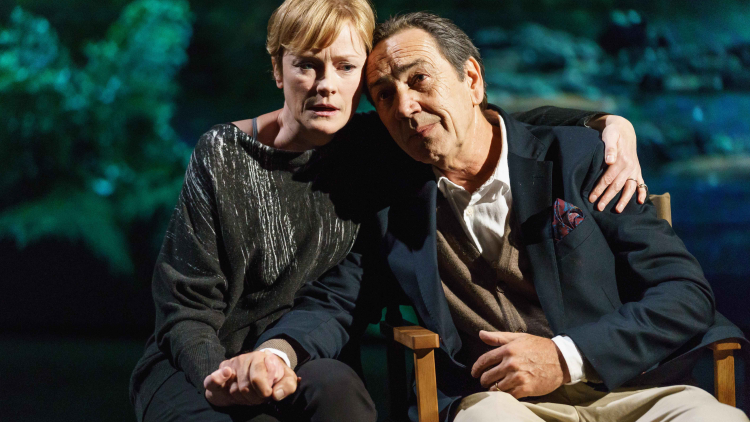 'Lindsay is magnetic as the celebrated cinematographer, who looks back over his life from Alzheimer’s-affected old age in Terry Johnson’s moving play'

'Jack Cardiff, the celebrated cinematographer who is the subject of Terry Johnson’s new play, once wrote that if you submitted your life to a decent script editor, it would be rejected on structure alone... a riveting performance from Robert Lindsay.'

'We see Cardiff in his declining years when his son, Mason, has set up the garage of his dad’s Buckinghamshire home as a sanctum where he can finally write his memoirs. Copies of Cardiff’s favourite paintings and lustrous images of the female stars with whom he worked adorn the walls. But although Mason engages a young woman, Lucy, to act as both carer and typist, Cardiff prefers to re-enact the past rather than record it. Not only Lucy and Mason but also Cardiff’s wife, Nicola, increasingly become figures from his crowded cinematic memory leading at one stage to a re-creation of the hazards of location shooting for The African Queen.'

'Most people’s minds, as they grow older, become a jumble of past and present: Johnson suggests this is doubly so if they have had a career like Cardiff’s and also have Alzheimer’s.'

'Lindsay is amazing to watch. He evokes the casual charm that made Cardiff magnetic to the women he worked with as well as the professional obsessiveness that led him to experiment with prisms and seek to reproduce the textures of a Vermeer or Renoir on screen. Above all, Lindsay’s performance has a humanity that suggests Cardiff’s cinematic memories are accompanied by a spasmodic grasp of reality.'

'Claire Skinner shifting between Cardiff’s wife and his idealised Katharine Hepburn, Rebecca Night as the carer who becomes his memorialised Marilyn Monroe and Barnaby Kay as the son who turns into Humphrey Bogart and Arthur Miller, also show the pangs of becoming part of someone else’s disordered dreams.'