EVERY DAY I MAKE GREATNES... 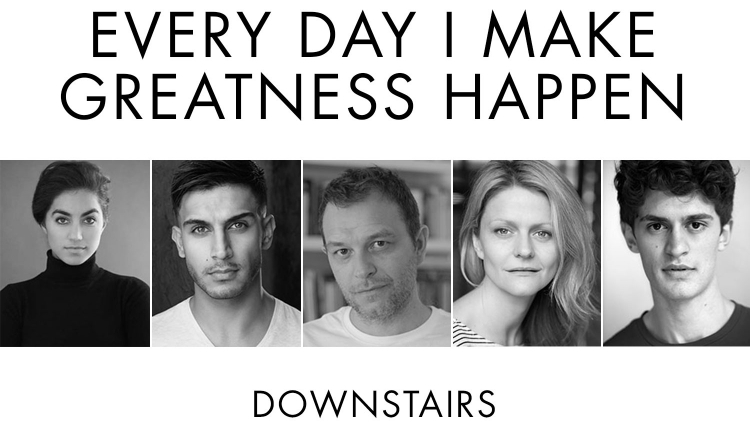 ‘For the next six weeks, we meet here, in this room. Unless you are hospitalised, or deceased, or suffering some kind of catastrophic physical or emotional trauma, you need to be here’

Directed by Alice Hamilton, this play is a searingly witty exploration of a struggling system and the people inside it, on both sides of the desk, trying to make things work.

Josh Zaré plays Iman. Josh graduated from The Royal Academy of Dramatic Art in July 2018. Every Day I Make Greatness Happen is his professional debut.

Richard Molloy’s Every Day I Make Greatness Happen won the Nick Darke Award 2017. His playwriting credits include The Separation (Project Arts Centre in Dublin/ Theatre503 - nominated for an Off West End Theatre Award for 'Best New Play') and O Do Not Love Too Long (Irish Theatre of Chicago at their New Irish Voices festival – winner of the New Works of Merit Playwriting Contest 2017 and shortlisted for the Liverpool Hope Playwriting Prize 2015 and the Kings Cross Award 2016). The opening scenes Someone's Gonna Break Your Heart, were performed at Flux Theatre's Emerge 2 showcase at the Tristan Bates Theatre in the West End July 2017.

Alice Hamilton is the co- Artistic Director with writer Barney Norris of Up In Arms Theatre Company. Her directing credits for the company include The March On Russia (Orange Tree Theatre); German Skerries (Orange Tree Theatre); Visitors (Arcola/ Bush / UK Tour); Eventide (Arcola / UK Tour); and While We’re Here (Bush Theatre). Other theatre includes Echo’s End (Salisbury Playhouse); Thirty Christmases (Supporting Wall); Anything That Flies (Jermyn Street); Orca and Orson’s Shadow (both Southwark Playhouse). She has been a staff director at the National Theatre, and has led development and dramaturgical projects at the Royal Court, the National Theatre, Salisbury Playhouse and High Tide.