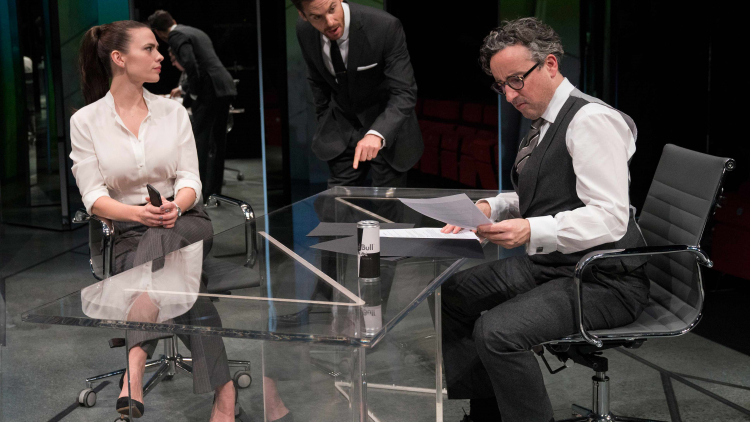 'This is a whip-smart workplace drama — think The Office, but with very serious money at stake. A real guilty pleasure'

'This is a smart and sassy American comedy-drama about the world of high finance in which people throw around words such as “granular” and “zero-based budgeting”. Even the title is in code: it’s not about snow at all, but the available investment capital on hand. This play, by Sarah Burgess, is one of a string of sophisticated American imports seen recently at the Hampstead Theatre: it was originally staged by the Public Theatre in New York in 2016.'

'This is a whip-smart workplace drama: think The Office, but with very serious money at stake, thus a set backed with a set of revolving mirrors large enough to make Versailles jealous. The play is set in a New York-based private equity firm called KMM Capital Management and when we meet Rick, the boss, he has just had the horrible experience of having to deal with real people: the media are appalled because he threw a crazily lavish party on the same day one of his companies laid off hundreds.'

'Aidan McArdle is superb as the desperately oily Rick. Jenny may be a “the bitch is back” stereotype, but, as played by Hayley Atwell, she is tart, ruthless and funny. Her foil is the other founding partner, the much less merciless Seth (a very personable Tom Riley), who is just reeling in a deal with a mid-market luggage company in California.'

'Anna Ledwich directs with the pace of stiletto heels walking into a boardroom, tap-tap-tap. There is no let-up as we are drawn into this world (the sleek set is by Andrew D Edwards) and almost immediately fall into the trap of actually caring about luggage company employees. This is a relentless look at how capitalism works at the sharp end. It’s a Blue Planet-type examination, except for finance, and the creatures we observe are fascinating. Slick, staccato and of-the-moment, this was a guilty pleasure.'