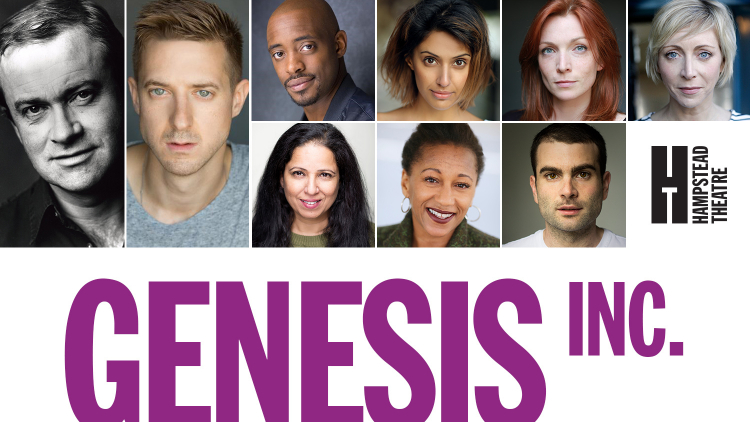 Directed by Laurie Sansom, this is a multifaceted tale of the final frontier of 21st century capitalism: the privatisation of human reproduction. This richly imaginative, topical, and explosively funny new comedy takes a closer look at the lengths to which people will go to defy biology - and at the moral compass of an industry that trades on fear and hope.

‘Cyclist are you? Good for the lungs, less so for the sperm. Try fast walking instead’

Shobu Kapoor's theatre credits include Shakespeare Within the Abbey (Shakespeare’s Globe); Dinner With Saddam (Menier Chocolate Factory) and What Fatima Did... (Hampstead Theatre). Her film and television credits include Boogie Man; Shoot Me. Kiss Me. Cut!; Acts of Godfrey; Eastenders; Citizen Khan; Unforgotten; Krypton; Clean Break; The Split and The Boy With the Topknot.

Laurie Sansom has recently directed the world premiere of Barney Norris’ play Nightfall at The Bridge Theatre. He was the Artistic Director and Chief Executive of the National Theatre of Scotland until 2016 for whom he directed The James Plays trilogy by Rona Munro, which premiered at the Edinburgh International Festival in 2014 before they transferred to the National Theatre in London, where they won the Evening Standard and Writers’ Guild Awards for Best Play. In 2015 he directed his own adaptation of The Driver’s Seat by Muriel Spark, and The 306:Dawn, a new site-specific piece of music theatre telling the stories of the 306 British soldier executed for cowardice in the First World War. Previously he was Artistic Director of Royal & Derngate, Northampton where he directed then European premier of Tennessee Williams’ Spring Storm and Eugene O’Neill’s Beyond the Horizon, both transferring to the National Theatre. He also directed new versions of The Bacchae, Blood Wedding and Hedda Gabler as part of the London 2012 Cultural Olympiad, Frankenstein (with Frantic Assembly), The Duchess of Malfi, Follies and The Prime of Miss Jean Brodie. He has directed for theatres around the UK including the Traverse, Birmingham Rep, Salisbury Playhouse, Lyric Hammersmith, New Vic, Stoke, West Yorkshire Playhouse and the National Theatre, London, where he directed the world premiere of The Holy Rosenbergs. At the Stephen Joseph Theatre, Scarborough, where he was the Associate Director to Alan Ayckbourn, he directed over twenty new plays including Villette (with Frantic Assembly) and a micro-musical season comprising three new musicals. His Watford Palace production of Dangerous Corner was re-staged at the West Yorkshire Playhouse and transferred to the Garrick theatre, West End in 2002.

Genesis Inc. is a work of fiction and any similarity to any real person or organisation is purely coincidental.