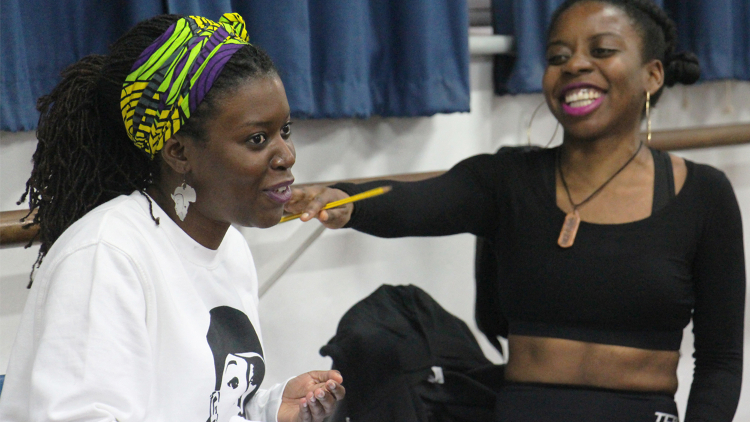 We caught up with The Hoes' Director Lakesha Arie-Angelo to talk favourite rehearsal moments, crucial life advice and sisterhood... The Hoes plays Downstairs until 1 December.

How would you describe The Hoes in a nutshell?

What attracted you to The Hoes?

When I read this play I saw myself and my peers; I felt represented, the characters speak the way me and my friends do and have experiences similar to that of myself and other millennials I know. The play is also ridiculously funny; proper belly laughs. It’s unapologetic, it’s refreshing to see young black women on stage owning their sexuality.

“Salmonella”. I can say no more than that.

Any favourite moments from rehearsals

There were many hilarious moments- some that had us rolling around in tears of laughter. One that is probably most appropriate to share is one where I sent Ifeyinwa Frederick (the writer) away to re-write the scene that wasn’t quite working. It’s where J reclaims her sense of fun and youth. Ifey agonised over it but returned an hour or so later to the rehearsal room and kind of nervously whispered an idea in my ear, almost expecting me to disregard it immediately. But when she told me the idea, we burst out laughing at how crazy an idea it was - but it was actually genius! I asked her to write it immediately, so we could try it out with the cast. I won’t give too much away but that’s how we decided J got her spark back.

I see it as a role where you orchestrate everyone’s creative input to bring written text to life; empowering people to bring their creativity to the table. A big part of it is team management. Within new writing, I love working as a Dramaturg as well as Director.  On The Hoes I worked closely with Ifey to pick apart the already great script to re-construct it to what it is today which is something I love doing as a director.

I also think as a Director working in tricky times politically, you must be conscious of not only the work you put out but how you carry out the work and with whom. I am passionate about giving opportunities to creatives from under-represented backgrounds, so my entire team is made up of people of colour, women and people who identify as disabled or LGBTQ+.

I really enjoy Ned Bennett’s work- it’s always such a theatrical experience and a bit of a spectacle. Yael Farber is also truly wonderful, her work seems to layer so many textures; a real treat for all the senses.

I’m not a massive screen fan but I tend to enjoy the work of Lee Daniels and Steve McQueen- when I was introduced to their work I was like “Oh they directed the sh*t outta that!”

I love new writing, so it hasn’t been written yet. But my introduction to theatre was Musical Theatre so I would love to direct a big musical. Perhaps something like The Color Purple which has great music and good writing and a story where I see people like myself represented onstage.

It would have to be this moment: making friendships I will take with me after this project. Creating a piece of work that my non-theatre-going friends actually want to come to! Being part of work that is sparking conversation and making people laugh.

Most recently Misty by Arinze Kene. I love how he incorporates spoken word, and music, and performance art, and clowning into a story that has grit and substance that is challenging and empowering: proper “Featre Sh*t”

What does the word ‘sisterhood’ mean to you?

For me it’s a female support system fuelled by love. Ifey mentioned once it’s a space where you can do your “Ugly crying” and I love that idea. As you age, sisterhood evolves also. E.g. when you’re a teenager your girlfriends are your entire world but as you get older, you’re more of an individual and your girlfriends are there to support you in your world. It can be a hard shift to adjust to but good sisterhood can withstand that.

Act out of love not fear.