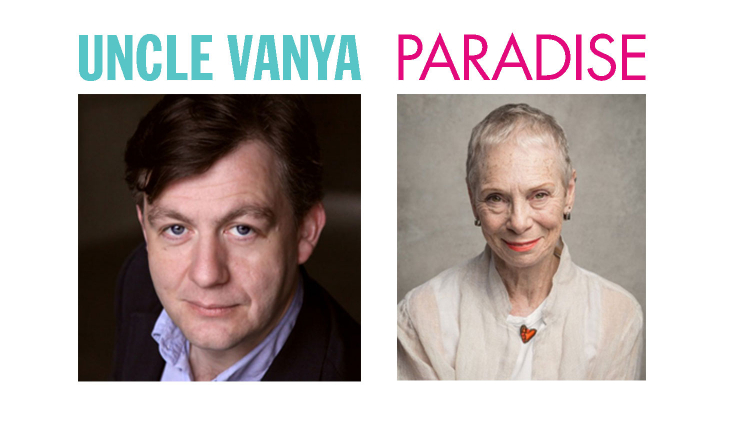 ‘Don’t be miserable, you wonderful woman; be a mermaid. There’s the ocean; throw yourself in. Fall in love with some poor mortal and drag him down with you. Astonish us!’

On an estate deep in provincial Russia time seems frozen: managing its affairs on behalf of her father, Sonia and her uncle Vanya have consigned themselves to a life of loveless drudgery, enlivened solely by the odd pamphlet from Moscow and the occasional visits of their neighbour, the doctor.

But when Sonia’s father and his stunning second wife Yeliena burst onto the scene, everything is thrown into confusion. As beauty stirs repressed desires and youth teases maturity, years of perilously supressed regrets, longings and unrequited loves threaten to explode into farcical life…

Olivier and Tony Award-winner Terry Johnson returns to Hampstead following his critically acclaimed hit Prism starring Robert Lindsay and Hysteria starring Antony Sher as well as Race; Old Money; Seminar and The Memory of Water. Playwright includes Dead Funny, Prism and Ken (all Hampstead Theatre); Insignificance; Cries from the Mammal House; Hysteria; Piano/Forte and Hitchcock Blonde (all Royal Court); The Graduate and Mrs Henderson Presents (both West End); Cleo, Camping, Emmanuelle and Dick and The London Cuckolds (both National Theatre). Other credits as Director include Oh What a Lovely War and Fings Ain’t What They Used T’Be (both Theatre Royal Stratford East; marking the 50th Anniversary of Joan Littlewood’s Theatre Workshop); Lost Land and The Libertine (both Steppenwolf Theatre, Chicago); Dumb Show (Royal Court). West End and Broadway directing credits include The Duck House; End of the Rainbow; The Prisoner of Second Avenue; The Rise and Fall of Little Voice; La Cage aux Folles; Rain Man; Whipping It Up; One Flew Over the Cuckoo’s Nest; Entertaining Mr Sloane and Elton John’s Glasses. His work for television includes Not Only But Always (Channel 4, which won five International Award nominations, Best Film at Banff and the Best Actor Bafta for Rhys Ifans); The Man Who Lost His Head (ITV); Cor, Blimey!  (ITV) and The Bite for the BBC and ABC Australia.  Nicholas Roeg’s film of Insignificance was the official British Entry at Cannes in 1985. His plays have won him the Olivier Award for Best Comedy in both 1994 and 1999, Playwright of the Year Award 1995, Critics’ Circle Best New Play Award 1995, The League of American Theatres and Producers Best Touring Play Awards 2001, plus two Evening Standard Theatre Awards, two Writers Guild Best Play Awards, Time Out Best Play Award, the Mayer-Whitworth Award and the John Whiting Award. As a director he has been the recipient of a dozen major theatre awards including the Tony Award for Best Director of a Musical 2010, Olivier Award for Best Musical Revival and Critics’ Circle Best Musical Award 2009 all for La Cage aux Folles.

David Shaw-Parker plays Telyeghin. David trained at RADA in 1975 and began his career at the Royal Shakespeare Company in 1977, appearing in over twenty-five productions between then and 1991 at Stratford Upon Avon and London including Much Ado About Nothing, Cyrano de Bergerac (Broadway, NY) and The Taming of the Shrew (Tokyo). His theatre work for the National Theatre includes Oedipus Rex, The False Servant and My Fair Lady. Other theatre work includes Grand Hotel (Dominion); The Country Wife, Cyrano de Bergerac and Acorn Antiques (Haymarket); Heavenly Ivy (The Ivy); Up n’ Under (Fortune); A Dead Secret; The Importance of Being Earnest and Arsenic and Old Lace (all Richmond Theatre); Milkwood Blues (Lyric Studio, Hammersmith); Uncle Vanya (Print Room); Titus Andronicus (Shakespeare's Globe); McQueen (St. James’) and Hobson's Choice (Vaudeville). His film work includes Steven Soderbergh's Kafka; Pasolini's Still Life; The Man Who Knew Infinity and The Muppets' Christmas Carol. His television work includes Endeavour; Victoria; The Crown; Inspector Morse; The Famous Five, Space Precinct and The Commander.

Elite Homes: offering the Platinum Package in luxury retirement living. Old friends Amanda Goose and Roddy Meakin are enjoying their twilight years on their own terms – outrageous pranks and clandestine gins in the garden, adult magazines at the dinner table and a healthy disregard for the other residents. All is idyllic – until, that is, new management is brought in to restore order…

Sara Kestelman plays Amanda. Her theatre credits include Filthy Business and The Intelligent Homosexual’s Guide to Capitalism and Socialism with a Key to the Scriptures (Hampstead Theatre); Cabaret (Donmar); Girls (UK Tour); 4000 Miles (Bath Theatre Royal); Torchsong Trilogy (Menier Chocolate Factory); Making Noise Quietly, Nine, Hamlet, Love for Love, As You Like It, The Double Dealer, The Threepenny Opera and The American Clock,  Copenhagen (National Theatre); Macbeth, Custom of the Country (RSC); King Lear (RSC/Barbican); A Midsummer Night’s Dream (RSC/New York); Lettice & Lovage (Gielgud) and Fiddler on the Roof (Palladium). Her television and film credits include Zardoz; Lisztomania; Lady Jane; Anna Karenina; The Last Spark of Sundown; Rome; The Rivals of Sherlock Holmes; The Last Romantics and In the Flesh.

Dusty Hughes returns to Hampstead Theatre following Bad Language in 1983. He was Theatre Editor of Time Out and helped to establish that magazine’s theatre coverage as an alternative voice. He then joined the Bush Theatre as Artistic Director. In 1980 his first play "Commitments" won him the London Theatre Critics Most Promising Playwright Award. His subsequent plays have been seen at the National Theatre, The Royal Shakespeare Company in Stratford and London, The Royal Court, Hampstead Theatre, The Traverse Theatre, Edinburgh, The Bush, the Donmar and in the West End as well as in Europe and America. He has worked extensively in television. He was joint winner of the Writer’s Guild Award for Best Drama Series for Between The Lines and created The Brief for ITV as well as adapting Joseph Conrad’s The Secret Agent for BBC1. He has also written for many other series including Silent Witness and Lewis and most recently the BBC’s The Musketeers (2015).

Full cast to be announced soon.