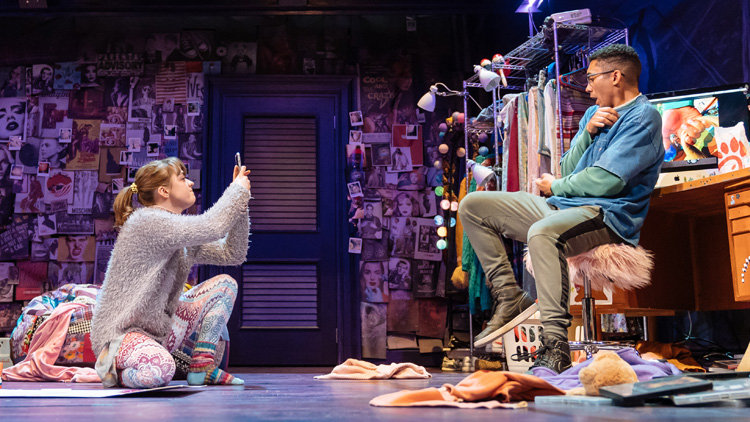 Review: I And You (Hampstead Theatre)

'Game of Thrones' Maisie Williams trades King's Landing and assassins for cat memes and Sum 41 in her professional stage debut at Hampstead Theatre. Pitched somewhere between The History Boys, Lady Bird and Me, Earl and the Dying Girl, Lauren Gunderson's play, receiving its UK premiere here, is a wonderfully intimate yet universal play (clocking in at a brief 85 minutes) and bagged all manner of awards when it premiered stateside.'

'The two-hander, which sees Williams star opposite other newcomer Zach Wyatt in Edward Hall's production, is set over the course of one evening in the bedroom of a young, life-threateningly-ill teen named Caroline (Williams). I and You takes its name from the Walt Whitman classic poem Leaves of Grass; Caroline is visited by a school friend, Anthony (Wyatt), who desperately needs help finishing a class project on the famed 19th century American poet and his use of pronouns.'

'Don't switch off there! Because Gunderson's piece, rather than a musty exploration of century-old lyrics by a bearded eccentric, takes Whitman largely as a departure and springs into becoming an endearing blend between youthful idealism and an exploration of mortality.'

'Caroline, surrounded by posters, paintings and a whole variety of screens, escapes her own body by indulging in the virtual world around her. Basketball playing, jazz-loving Anthony wants to drag her back into reality. As the night progresses and the reality of Caroline's world comes into focus, (without spoiling the end) it all becomes startlingly powerful and wracked with emotion.'

'Considering both are making their professional stage debuts (though Williams has a whole saga of Westeros history under her belt as well as a few successful films) the two performances are impressively assured and equally weighted – Wyatt as a gawky, lovable, beanie-sporting teen with a knack for self deprecation and an unending enthusiasm for poetry, while Williams plays up impetuous teenager vibes to mask the underlying fear bubbling beneath Caroline's surface. She perfectly nails the suppressed insecurity – forever pacing, never wanting to admit to the loneliness of her solitary confinement. Forget Arya Stark, let's keep Williams on our stages.'

'The show may be one of Hall's last as a director at the venue but he's clearly hit onto a solid trend with recent programming, bringing over some superb American hits and introducing them to British audiences. Gunderson's play throws life and death, youth and reality together with charming, often witty skill, and while the opening fifteen minutes may feel slightly shout-y, it all relaxes into a joyous, well-crafted evening spent with two endearing teens.'