THE HUMANS: ★★★★ FROM WHATSONSTAGE 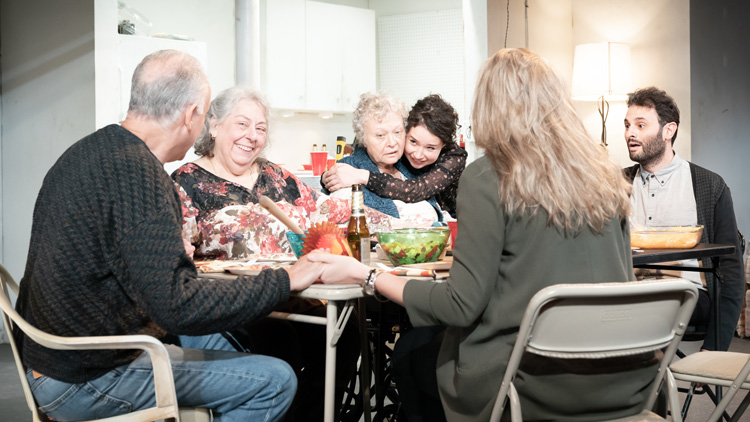 'Stephen Karam's The Humans is a wonderful play – funny and moving, involving and frightening in almost equal measures. From the moment the six members of The Blake family gather at daughter Brigid's new underground duplex in New York to celebrate Thanksgiving, it holds you in its gentle grip and never lets you breathe until they depart at the close.'

'Director Joe Mantello's production has arrived at Hampstead wholesale from New York, bearing not only prizes (a finalist for the 2016 Pulitzer for drama, the 2016 best play Tony) but its entire cast. Which is as it should be since it is the finely-tuned interaction between them and the deeply grounded reality of their portrayals that makes the evening so engrossing. .'

'Karam has a sharp ear and eye for the subtleties of poverty and class that divide them. Erik and Deidre subscribe to values of religion and society that Brigid and her sister Aimee (Cassie Beck), who has split up with her lesbian lover, reject. Deidre smuggles a Virgin Mary into the house to protect her daughter; Erik can't understand how Rich, who will inherit a trust fund at 40, can possibly be depressed, or how Brigid can waste her money on health foods when she has no job and a student loan for studying as a composer to pay off. "If you're so miserable, why're you trying to live forever?" he asks, in one of the play's many fiercely funny lines.'

'As they care for Erik's mother Momo (Lauren Beck) whose ravings from her wheelchair underline the sense of existential threat – "why'm I here?" "where do we go?" – they are so overwhelmed by the unexpected poverty of their lives that they do not know where to turn. "Don't you think it should cost less to be alive?" asks Erik. They are assailed by worry and doubt, by fear of death and the unknown. Erik has stopped sleeping; Deidre, holding it all together, has sent her daughters an article that suggests that, at a subatomic level, "everything is chaotic and unstable".'

'Momo's moment of clarity as they say grace is profoundly moving, as is Rich's sudden realisation that he needs to buy his family a peppermint pig, so that they too can count their blessings in the strange way the Blake family does. The relationships between Aimee and her father, between the sisters, are tender and profound.'

'Under all their vulnerabilities lies the moment when America itself realised it was no longer invulnerable. Erik and Aimee narrowly escaped death in the Twin Towers. Karam is a good enough writer not to labour the point. It is just there, like the loud, unsettling bangs from upstairs, and like the little flashes of love that illuminate the tug and pull of family life so beautifully captured in this exceptional play.'