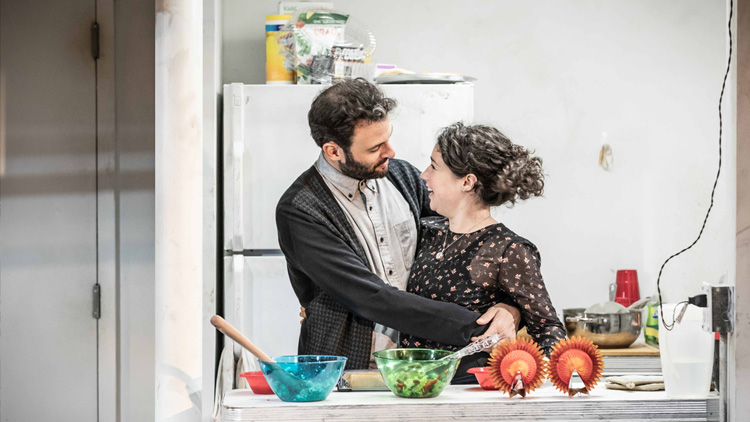 'Erik and Deirdre Blake have travelled into New York City from working-class Scranton, Pennsylvania, to spend the day with their daughters Aimee, a lawyer, and Brigid, a wannabe musician working two bartending jobs to make ends meet. But the jostling jollity as they arrive in Brigid’s new rental, a dingy Chinatown flat, always has an edge. Also present is Brigid’s new boyfriend, Richard (doing the cooking), and grandma Momo, who has dementia.'

'It’s a slow burn this one but intriguing from the get-go. Joe Mantello directs a play that, at some point (the Swiss chard salad?) turns into a sort of psychological thriller.'

'The flat (the ultra detailed two-level set is by David Zinn) is prone to mishaps. Lights go out, things go a lot more than bump in the night: it often sounds like a poltergeist is doing DIY above.'

'Things are falling apart. And it’s not only the building. The Blakes are having a tough time, as is the American middle class in general. The wonder of this script by Stephen Karam is how skilfully he interlaces all of that into what seems (and I am American originally) a pretty normal event. This feels real. They josh, banter, criticise, apologise.'

'Secrets and lies. Fears and fibs. Everyone’s got a hidden story here, playing out in real time. This play won four Tonys in 2016 and this is the Broadway cast. I can hardly believe our luck.'

'They all inhabit their characters from the inside. Reed Birney is Erik, a man who couldn’t see the bright side of a shiny penny. Jayne Houdyshell is fantastic as Deirdre, the kind of mother who sends her children care packages with wind-up radios in case of a random emergency.'

'There is much to absorb here as you start to see how the American dream, for those in the middle, is under siege.'