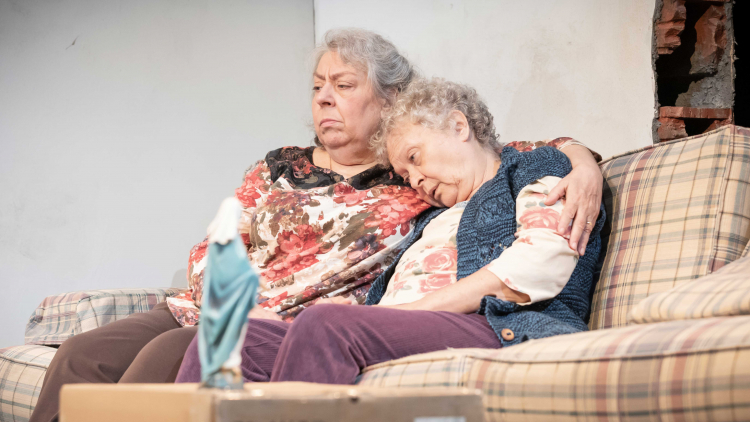 'Transatlantic theatrical traffic is busier than ever, and now here at the Hampstead is not just Stephen Karam’s Tony-winning play, first seen in 2015, but director Joe Mantello and his full Broadway cast. It seems fitting that they should travel together, sinceKaram’s work is so dependent upon a company – as they do here – capturing the intricate rhythms of family, until the rich naturalism begins to convey something profound.'

'The chilly, duplex Chinatown apartment – superbly conjured by David Zinn’s two-level design – similarly works as the realistic backdrop for squabbles that often stray into real estate, money and New York itself, as well as reflecting the family’s psychological turmoil and a foray into the ghostly.'

'Birney and Houdyshell (both Tony winners in these roles) pull off the theatrical magic trick of total but understated sincerity – you groan at and sympathise with their well-meaning pair, until you’ve reached a level of investment that makes the latter part of the play acutely painful. A very funny Houdyshell lifts the veil of Deirdre’s stubborn certainty to show how small barbs sting, while Birney builds his textured portrait to a climax of emotional might.'

'There’s superb work, too, from Beck as wry Aimee, determined not to be defined by illness, and yet even more ravaged by loneliness; Steele as the assured, outspoken Brigid, whose quick mind doesn’t help her to understand or connect with her parents; Klein’s remarkably nuanced performance as Momo, scattered speech echoing the family’s miscommunications; and Moayed’s Richard, the would-be peacemaker whose kindness nevertheless tips into condescension.'