THE HAYSTACK FULL CAST AN... 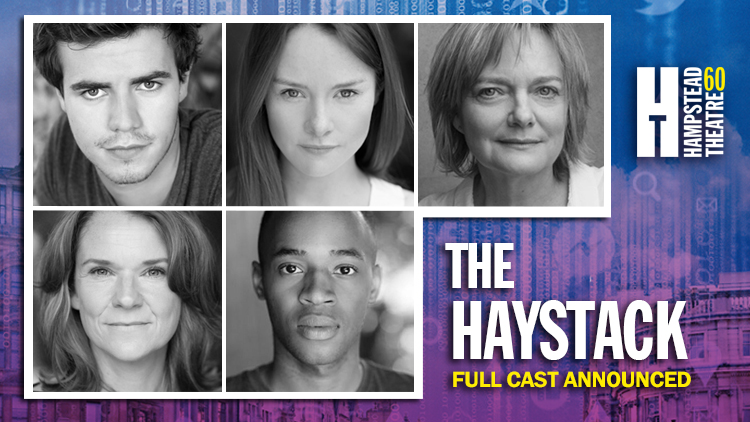 ‘Yes, we’re geeks, yes, we sit at computers all day, yes, we barely leave Cheltenham, but we are still, when it comes down to it, spies’

Hampstead Theatre today announces casting for the world premiere of Al Blyth’s explosive espionage thriller The Haystack, his first full-length play. Roxana Silbert makes her directing debut as Hampstead Theatre’s Artistic Director with this fast-paced, topical play, which delves into the intriguing world of GCHQ and examines the human impact of national surveillance. When an investigative journalist unearths a controversial lead, loyalties and ethics are tested to the extreme.

The cast will include Lucy Black as Denise, Oliver Johnstone as Neil, Rona Morison as Cora, Enyi Okoronkwo as Zef and Sarah Woodward as Hannah.

Neil and Zef are two twenty-something computer whizzes with questionable dress sense and a highly developed interest in video games and Netflix. They’re also the UK’s ‘National Defence Information Security Team’ - recruited by GCHQ for their sky-high IQs and ability to work quickly and discreetly, no questions asked.

With unfettered access to the world’s data and infinite powers of electronic intrusion, these unlikely agents are essential cogs in the national security machine.  But when their window onto intelligence operations shows them more than they were meant to see, they begin to question their roles in a system whose reach is unlimited but whose safeguards are not…

Al Blyth studied Econometrics & Mathematical Economics at Bristol and L.S.E., before working as a research economist at the Institute for Fiscal Studies. In 2006 he was awarded Soho Theatre’s Westminster Prize, for his play Furnace Four. He was selected for the Paines Plough Future Perfect scheme in 2008 and won Channel 4’s 4Talent Prize for Dramatic Writing the same year. Al’s TV show The Rook, a supernatural spy thriller based on the novel by Daniel O’Malley, premiered on the cable network Starz in 2019. He is currently co-writing the book and lyrics for a musical adaptation of Fantastic Mr. Fox, with his writing partner (and wife) Sam Holcroft, and the composer Arthur Darvill. The Haystack is Al’s debut full-length play. Previous short pieces produced in the UK include: Reality and The Poet of Elswick Park (both RSC/Live Theatre); Under My Skin (Paines Plough/Òran Mór); Community Payback (RIFT Theatre); The Abolition Of Death (RSC) and The Hag of Hyde Park (Paines Plough/Globe).