COST OF LIVING: ★★★★ FROM THE GUARDIAN 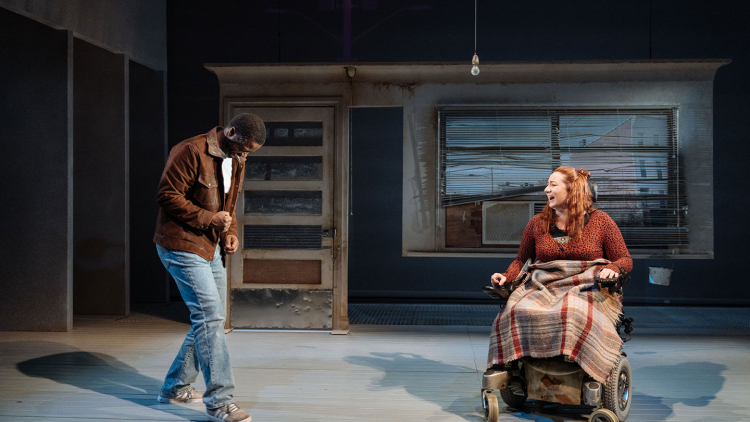 'For the 100th premiere in his decade-long tenure at Hampstead Theatre, Edward Hall has chosen a Pulitzer prize-winner by the Polish-American Martyna Majok that deals with people marginalised by society... this is a play that increasingly gets under your skin through its ability to provoke feeling without lapsing into sentimentality.'

'Majok presents us with two parallel storylines. Eddie, an unemployed New Jersey truck driver, tries to get back with his estranged wife, Ani, who is paraplegic as a result of a road accident. We also see John, a Princeton PhD student with cerebral palsy, employing a young female carer, Jess, who scrapes a living working in bars. Majok captures the tetchiness in both relationships: Jess irks John by using a term like “differently abled” while the free-swearing Ani greets Eddie’s offer of help by snarling: “You’re not doing penance on me.” Yet Majok movingly shows four people bound together by mutual need... this is a play about our dependence on other people that is impeccably acted.'

'Adrian Lester suggests Eddie is an instinctive man driven by a craving for his wife’s surly companionship. Katy Sullivan, who was in the original New York cast and who competed in the 2012 Paralympics, captures vividly Ani’s wary toughness and blunt humour. Jack Hunter pins down John’s mix of arrogance and vulnerability, and Emily Barber as Jess neatly embodies an America in which even the educationally qualified end up on the breadline. Fluently directed by Hall, it’s a play that argues, like John Donne, that no man or woman is an island entire of itself but a part of the main.'

To read the full review please click here to visit The Guardian online.