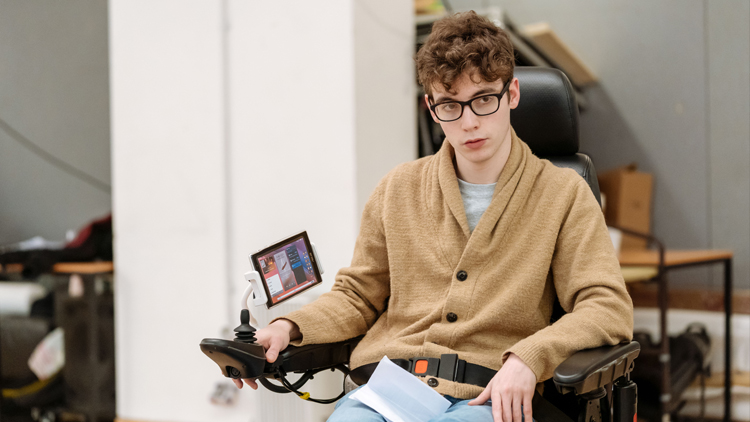 'The latest Hampstead Theatre play casts disabled actors in disabled roles, but it’s not just about that.'

'Race and class are thrown into the mix in a Pulitzer Prize-winning drama which examines perceptions of privilege and human connection - and requests that actors with similar impairments are cast in the appropriate roles.'

'Jack Hunter plays wealthy Princeton graduate John, who has cerebral palsy and hires Jess to bathe and dress him.'

'Hunter, who is “just starting out” in his acting career says: “I was so intrigued when I realised there was going to be a character with CP. I read it very carefully because in my opinion it’s not always used for the right reasons, but the play is subtle and covers lots of issues, not just around disability. It’s about miscommunication and how people judge each other. You can see impairment in the two sets of characters - and I don’t strictly mean physical impairment. Everyone’s got their demons and struggles; addiction, loneliness, it’s about the human condition.”'

'Hunter was also reassured that the team at Hampstead Theatre would stage the story sensitively and says it’s “refreshing” to cast disabled actors.'

'“Times are changing, there certainly has been a shift and it’s really refreshing having disabled actors coming to these characters rather than non-disabled actors being fitted into the role to bolster attention for the play.”'

'Jess is a fellow Princeton graduate who works in bars to make ends meet.'

'“They keep missing each other,” says Hunter. “Undressing someone is really flying into the intimacy of someone’s life. She just wants to do the job but obviously he is a person not just a bit of work. He’s a solitary guy with little social interaction and ignorant of lots of things, he has no idea of Jess’ situation. He thinks all Princeton graduates have salaried jobs, they don’t work in bar. But he realises she’s different with a different life and someone who can challenge him.”'

'Hunter has a different form of CP to his character, his is ataxic which affects dexterity and balance, while John is a spastic quadriplegic.'

'“Just because I’ve got CP doesn’t mean I’m the perfect fit, it’s not like telepathy. I had to learn how to move my body, speak with an impairment and do an American accent. But the play really speaks to me. I have a twin sister who is in a chair and a lot of the struggles that these characters go through I have seen happen to people I know.”'

'“Martyna’s writing is so on point and honest, it’s amazing. Most people I know who are disabled have a great sense of humour as a mechanism to deflect awkwardness. She really gets that.”'

'He adds: “People need to be with each other. You can’t be on your own. Everyone needs friends; a support network, a relationship. Life can grind you down but as long as you have people there you will always come out on top.”'

To read the full review click here to visit Ham and High online.