A Q&A WITH... RAVENS: SPASSKY VS FISCHER'S RONAN RAFTERY AND ROBERT EMMS 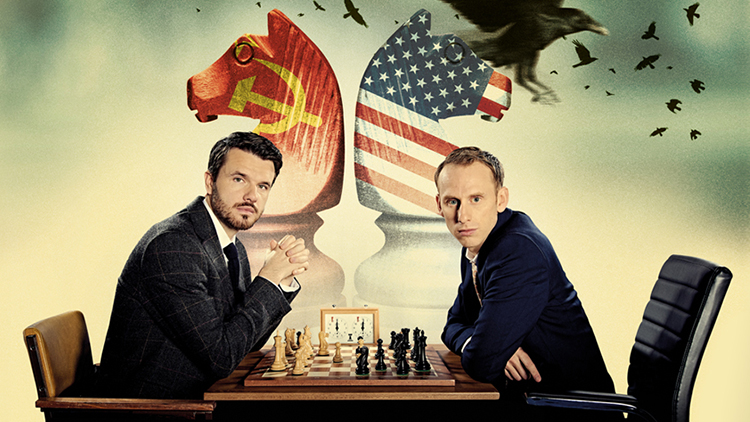 Welcome to Hampstead both of you. You’re in the middle of rehearsals for Ravens right now, how’s it all going?

Robert Emms: It’s going really well and learning about Annabelle’s vision for the piece has been exciting. Currently we are in the midst of finding ways to show the chess games without literally playing chess. There’s a lot of layers to investigate so we’ve been lucky to have the writer with us too.

Ronan Raftery: We’re about half way through so we’re at that annoying phase where everything is starting to fall into place, but you feel you should be further along. We’ll start run-throughs next week which I’m really looking forward to. That first time you track your character through the whole show is exhilarating.

What first attracted you to this story?

RR: It’s an iconic story and I was very excited to see how Tom had adapted it, which aspects of such a sprawling opus he would focus on. Within the first few pages I knew I wanted to be a part of the production - Tom’s writing is so precise and imaginative, he pulls you in immediately. I love how the story is routed in such huge, monumental events as The Cold War, and how we see the politics of that repeated in the organising of a tournament, and then again in the microcosm of a chess match.

RE: Well the immediate parallels between the story in our play and the political climate we live in now was very appealing. But mostly I love the way Tom writes with such vigour. I was drawn very much to the challenge of playing this version of Bobby Fischer: he’s a character of many contradictions. He’s mentally unstable and an ego maniac who is drawn to violence and self-destruction, and will do anything to get what he desires. It seemed like such a rich opportunity to explore.

Tell us a little more about how you’ve approached your characters – is it a different process when you’re playing real people?

RE: It’s always different with every role but with this one in particular, I watched lots of footage of Bobby and read books and articles analysing his character. This was all useful but after a while, that all falls away and the focus shifts to our version of Bobby. First it’s about understanding the sense of the words, then interpreting and letting the character sit in your skin. This can take some time to settle but with Bobby, he’s such a big character that it has been fun to explore where the boundaries and limits are.

RR: The process is quite similar whether the character is real or fictional. The primary focus for us has to be on our story and the conflicts, tension, and drama within it. Of course we have this vast mine of information, interviews and documentaries about Spassky and Fischer, and they are amazingly useful sources of context and inspiration, but the script is where our focus must lie. Otherwise you run the risk of putting a docudrama on the stage!

Without giving too much away, do you have a favourite line from the show?

RR: 'When you want something for so long, when you define yourself by the wanting of it, it can be disarming to finally…to finally achieve… do you understand?'

RE: That's my choice too!

RE: I saw The Doctor at the Almeida and it was so thought provoking. Such a clever and original piece of story telling and challenging for the audience.

RR: I live in Berlin most of the time between gigs, so I see a lot of mad theatre… I saw a completely silent show recently (I was dragged along, to be honest) with a company of actor/dancers who spent 90 minutes pulling up the floor onstage and building things. It was bizarrely hypnotic and fascinating.

RE: I would be a musician!

RR: A chef, I reckon. Not because I’m a particularly good cook, but I was always drawn to the life, and crazy hours and jobbing around from kitchen to kitchen, trying to be creative under pressure. It’s probably nothing like that really… but Anthony Bourdain seemed to have great time.

And finally, what the best advice you've ever been given?

RE: Do it for the process of doing it not to get it done. (It’s pretty basic but something I try to tell myself even with the most simplest everyday things)

RR: Never take advice from someone who gives it freely.