'SPASSKY VS FISCHER: HOW THE CHESS BATTLE BECAME A THEATRE EVENT' ON BBC ONLINE 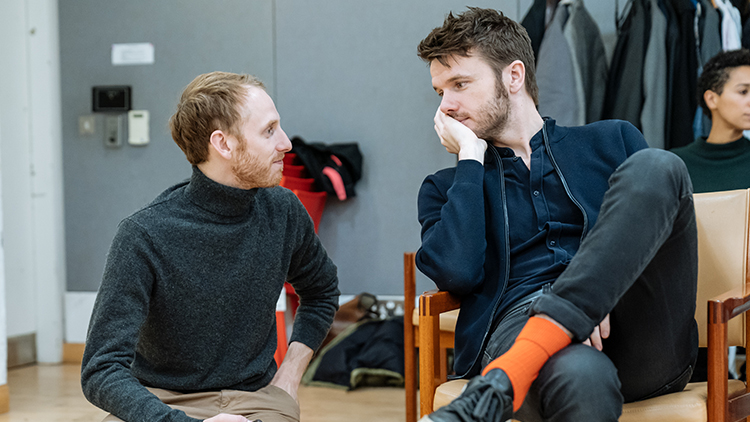 Spassky vs Fischer: How the chess battle became a theatre event

'When the American Bobby Fischer challenged the Russian Boris Spassky for the World Chess Championship in 1972 the media looked on in fascination. It seemed the Cold War was being played out in Iceland on a chessboard. Now a new play reconstructs the historic match.

It was pre-internet, pre-mobile phone, pre-online comment, pre-news channels, pre-streaming. The match was happening in a place inconvenient for the world's media. TV satellite space was at a premium: on US networks the updates were sometimes just talking to a reporter in Reykjavik on the phone.

No one had seriously considered chess as prime-time material. But then along came the unique and deeply troubled Bobby Fischer.

Fischer was born in 1943 and grew up in New York. From his early teens the game of chess obsessed him. At 14 he was the youngest ever US chess champion.

But since World War II world championships had been almost entirely dominated by the USSR. Could Fischer be the man to bring the prize back to Brooklyn?

Ravens: Spassky vs Fischer is an attempt to delve into the psychologies of two remarkable men. Spassky, who's now 82, was usually regarded as the more stable of the two. Fischer died in 2008 after years of bizarre behaviour and extreme statements - he praised the 9/11 attacks for instance.

Robert Emms has made his name as an actor in TV series, including Atlantis and Chernobyl. Now he has to make sense of playing Fischer.

"Bobby is packed full of contradictions. He was Jewish but he could be anti-Semitic. He was American but he seems to have felt no real patriotism. He was undoubtedly unstable and I think you need to go back to questions of paternity and the family he grew up in. His relationship with his mother was tense.

"However all that came about, he ended up with a vulnerability which shaped him. Bobby Fischer was a brilliant but self-destructive character and - though this is mainly after the period of the play - eventually he spiralled out of control. There's real tragedy there.

"As an actor that gives a huge amount to play with but you're always dealing with what's in the text: Tom Morton-Smith (the playwright) is always pointing the audience in a certain direction. Bobby probably was never happy and I'm not sure he had real friends. But he was larger than life, which is a gift to play."

Irish actor Ronan Raftery, currently appearing in the TV mini-series The Rook, plays Spassky. "He always came over on the surface as a much calmer and more focused player. But I think we now know more about how thrown and upset he was by Fischer's behaviour and we use that.

"Boris genuinely hated the fact that this game he loved so much had somehow taken on an aspect of superpower politics. As the reigning world champion he just wanted to play the match and win."

Emms thinks that in 1972 Fischer too was essentially apolitical. "It's interesting that neither man felt a strong affiliation to his country - what they were passionate about was playing chess and we communicate that on stage."

Which raises the question of how exactly do you stage chess for the theatre? Two people leaning over a small table holding their foreheads in silent contemplation doesn't promise great drama.

Director Annabelle Comyn says when she met with Morton-Smith the question of staging the games was high on the agenda. "In the text Tom reproduces them in standard form so chess fans can digest the moves if they want to. But deliberately there was no guidance as to how and to what extent we'd represent that on stage.

"The games soon take on a meaning which goes beyond the game itself. The match is being used both by the Soviets and the Americans for certain ends. So we start with a literal meaning for the moves but then we grow into a language of paranoia and politics and the language of control. That's a large part of what the play is about."'