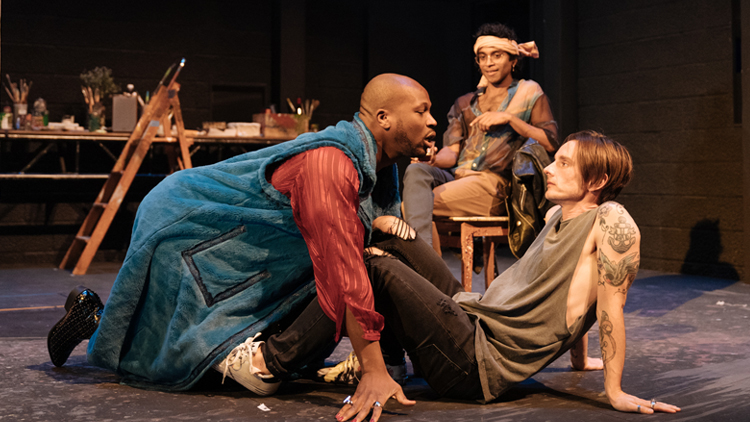 'Stefan Adegbola is currently starring in Hampstead Theatre's production of Botticelli in the Fire as Poggio di Chiusi, the title character's close friend. We caught up with him to have a chat about the show and the peculiar relevance of Renaissance matters.

What is Botticelli in the Fire about?

Botticelli in the Fire is, essentially, a queering of history. For those people who don't quite understand the term "queering history", it's all founded on the notion of taking the gaps that we have from the absence of records about certain elements of people's lives and colouring them in with what we imagine could have happened.

In the case of Sandro Botticelli - who was one of the great Renaissance painters - we know that he was, at one point, accused of sodomy in Florence. We also know that he gave up a lot of his works to the Bonfire of the Vanities, which was primarily encouraged by the preacher Girolamo Savonarola.

Out of that, our playwright Jordan Tannahill has spun this extraordinary, vivid tale of a man who is living in what was, essentially, the city of free speech and free expression of its time, Florence, the heart and home of the Renaissance. He's taken this character, or rather, this figure from history, this place from history, and he's built a story that is a vivid retelling or a warning to modern times about freedom of expression, love, power, wealth, inequality, sexual danger, and art.

There's a clear parallel with modern society - was it immediately clear from the get-go or was it something you built in the process?

I'll go a little bit further back, if that's OK with you. When I read the script, it was very clear that there were anachronistic references from the very first page. So, I knew that it wasn't going to be a straight historical drama. If it was that, I would have probably not been interested in doing the show. It was always clear from the breakdown of the actual piece itself that it was going to draw parallels to modern-day issues and struggles.

However, what was really interesting was that during the earliest part of the process, our director Blanche McIntyre talked about a trawling net. If you were to get a net and trawl from the bottom of the seabed right up to the surface, what you'd get is remnants from everything that's at the bottom and everything you meet on the way up. I suppose in many ways that's what this play is trying to do with its parallels to history.

In modern life, what we can loosely call "modernity", we have struggled for 500 years with this idea of how much liberty do we give, how and where does that stop, and at what point do people start being perceived as too liberal and what's the reaction to that? How do we deal with those who are illiberal in a liberal society?

Who do you play?

I play Poggio di Chiusi, who's one of the few invented characters in the play. He is the best friend. He's the sassy, clever, witty, fiercely loyal, brave, and proud best friend of Sandro Botticelli. He is his right-hand man, his confidante, his biggest supporter and fan. He's also an artist of his own right, but he's a very politically energised, exuberant character. He's also proudly gay. He is camp, and witty, and a bon vivant. At the same time, he's incredibly capable of being serious when it's needed.