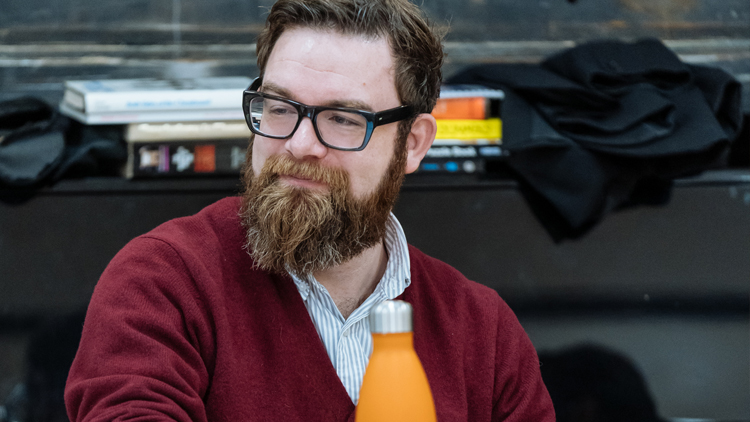 Tom Morton-Smith on dramatising the ‘chess match of the century’

To many of us that might look like a keyboard malfunction — but chess players will recognise it as the opening moves of a game. And not just any old game. These are the precise moves executed by grandmasters Bobby Fischer and Boris Spassky in the first of the 21 games that made up their legendary 1972 world chess championship in Reykjavik — a key point in the cold war. On those moves, and others like them, hung the bragging rights to global supremacy for the US or the USSR.

That tournament is at the heart of Morton-Smith’s Ravens: Spassky vs Fischer, which opens at London’s Hampstead Theatre next week. It’s a cold war thriller: a drama that spins us back to a period of mutual hostility and rampant suspicion during which culture, sport and space travel became proxy battle fronts in a struggle to demonstrate ideological superiority. Rudolf Nureyev had defected to the west; US astronauts had planted a flag on the moon; the Vietnam war dragged on. Morton-Smith was fascinated by the way huge global tensions were concentrated into the tiny moves on a chess board.

“There’s this stand-off between these two superpowers and you find a little release valve in this chess tournament,” he says. “It was massive. For weeks it became front-page news. Chess had never been as big — and has never been as big since.” The match has already inspired books, documentaries, films and, to some degree, the musical Chess. But for Morton-Smith (whose breakthrough drama was the brilliant Oppenheimer in 2015) the event feels particularly fresh now, as we worry again over heightened global tensions and polarising ideologies. He is struck too by the clash between the personalities of the two men themselves and the roles they were expected to play...

“Nothing has really been said about the story I wanted to hear,” he says, “which was about the two men and how they were held up to represent the values and ideologies of their societies in front of the world. And yet they were not very good representations of either a Soviet or an American.”

It’s a gripping story. The high stakes produced a vivid tension between the purity of the game itself and the deep mistrust running through both camps. Fischer arrived late, enraging the Russians, and, on arrival, complained about the chess board, the venue and the television cameras. Both sides accused the other of cheating and there were wild theories about telepaths in the audience, devices in the lighting rig, a transmitter in a chair and poisoned orange juice. The tournament became a microcosm of the bigger conflict and the paranoia of the period.

Morton-Smith has relished reproducing that pressure-cooker environment onstage. He’s also tried to build the caginess of both the event and the game into the structure of the play itself.

“If you are writing a play about chess it is near enough impossible to move away from the idea that everyone is playing chess,” he says. “There’s a big question over whether Bobby Fischer’s behaviour — his lateness, losing the first game, forfeiting the second — is all part of a strategy. Is it tactical? Is it instinctive? Is he terrified? Everyone is second guessing: it’s a good metaphor for the cold war — and also for today.

“[Fischer] was obviously incredibly gifted, but because of that he was essentially allowed to spiral out of control,” says Morton-Smith. “It baffles me why some people are given a free pass. Suddenly everyone is bending rules to try and accommodate this chaotic element because he’s so popular or powerful. Exploring that phenomenon feels like a worthwhile thing to do just now.”

Even so, writing about Fischer involves trying to think your way into the exceptional mind of a chess-playing genius. Morton-Smith, who says he is “pretty poor” at the game, has found that demanding.

“It’s a kind of genius of spatial thinking, which is not what I have in my head at all, so that’s very difficult,” he says. “And it’s so incredibly intense. It’s a real physical and mental test to endure those long tournaments and to grapple with the psyche of someone else — who is sitting in front of you...'