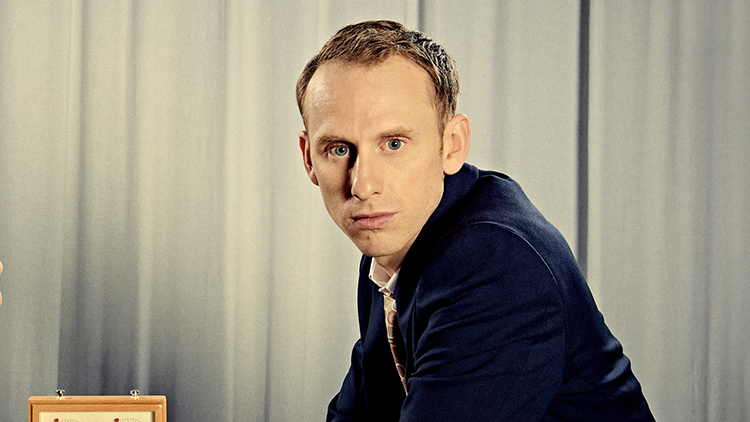 Ten years is a long time away – Ravens: Spassky vs Fischer has been overdue

'Having made his name starring as Albert in the National Theatre's 2009 production of War Horse, it might be something of a surprise to learn that Robert Emms has not returned to the stage since. He has of course been busy in the meantime, starring in films as varied as Borg/McEnroe and Jurassic World: Fallen Kingdom whilst also cementing a career as a celebrated television actor. 2019 has proved a successful year for Emms, playing roles in the universally-acclaimed HBO series Chernobyl and the current BBC Phillip Pullman adaptation of His Dark Materials.

We caught up with Emms to discuss his upcoming role at Hampstead Theatre as chess genius Bobby Fischer in new production Ravens: Spassky vs Fischer. Tom Morton-Smith's play depicts the 1972 Chess World Championship game between two of the sport's greatest champions, which not only contributed towards Fischer's mental breakdown but also held wider implications for the ongoing Cold War.

How did you first become involved with the production?

I met our director Annabelle Comyn at the end of summer and immediately loved the play. I found the way Tom Morton-Smith writes so engaging and of course Bobby Fischer is such a fascinating character. I read the script quickly and felt very strongly that this was a good role. I haven't done a play in ten years so I wanted to pick the right thing to come back to the stage with and this felt like a real challenge and something I could get stuck into.

Are you a chess nut then?

I played chess when I was at school once or twice but I couldn't remember the rules when I became involved with the production. As I started researching this 1972 match, which was obviously an incredibly famous championship, strangely it started to come back to me. I am still absolutely terrible though.

It must be hard for the public to comprehend how momentous this event was?

Chess really came into the mainstream – Fischer became a celebrity in his own right and a poster boy for the game. The size of the arena that they played in was as big as Royal Festival Hall, packed out with people from all over the world. It was a huge spectacle.

Has the character of Bobby Fischer given you a lot to work with?

Obviously the fact he was a real person is incredibly useful because it gives me a lot of research material. His whole identity became about chess. He was left alone from an early age to play the game and didn't know who his father was – there were so many things going on inside this little boy's head that he became completely obsessed with being the best player in the world. But when he achieved that, it didn't fix anything. His mind became even more distorted, even more fractured.'