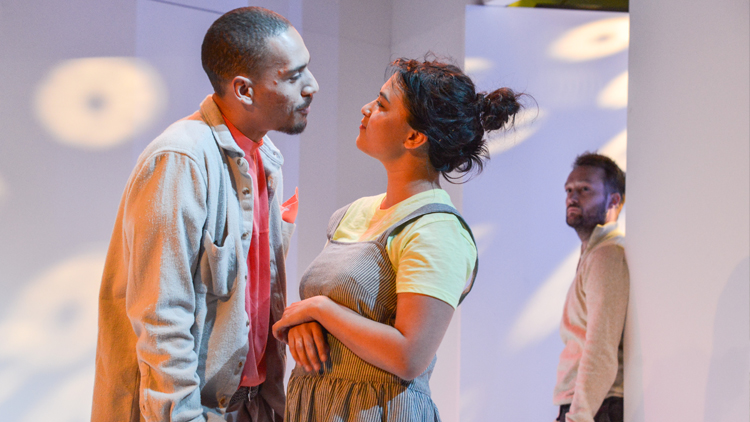 'Ruby Thomas' debut play is a delicious mix of humour, intelligence and desire. Playing at Hampstead Downstairs and directed by Guy Jones, the production is an energetic attack at the conventional monogamous relationship so many people find themselves in.

'Six actors work together to play the same two people - the concept behind the decision is that these characters can be played by anyone of any gender, sexual orientation, race or culture. Isabella Laughland and Gabriel Akuwidike set the initial tone for the loved-up couple. Vibrant, yet also intimate in their portrayals, they are a spontaneous duo that decides to ditch their party guests to spend a night together in a hotel room.'

'Thomas is brilliant at showing how tumultuous life can be; through her dialogue she effortlessly proves that opportunity and spontaneity don't always equate to happiness.'

'Bethany Well's blank white box design shows how bare life can be without connecting to other people. Jamie Platt's lighting is superb, with a particular highlight being in how they use doors to manipulate shadow and evoke emotion.'

'Jones' directs everyone so well. The other four, Patrick Knowles, Bianca Stephens, Lizzy Watts and Tilda Wickham are just as perfectly cast. Every performer exudes authenticity, and its so thrilling to see the same character played over and over again, but with a different interpretation each time. This sort of casting is refreshing.'

Either plays Downstairs until 26 October