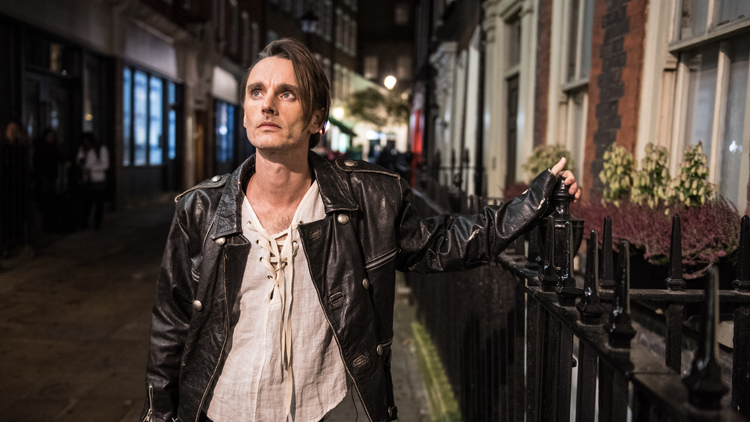 'It’s not often that we see London cabaret performers getting the recognition they deserve. All too often their success stays swirling inside the walls of a Soho bar’s back room. Very few break through and enjoy the success that most of them are due. One performer who has managed to break out into mainstream success is postmodern pickpocket Dickie Beau.

This past year alone he’s appeared on screen opposite Keira Knightley in acclaimed biopic Collette, and clinked champagne glasses with Remi Malik’s Freddie Mercury in Bohemian Rhapsody. We caught up with Dickie in the run-up to his turn as the Early Renaissance painter in Jordan Tannahill’s Botticelli in the Fire.

So Dickie, where are we catching you this evening?

Lying in the gutter, looking at the stars.

Crikey. What would you say’s been occupying your thoughts recently?

Extinction Rebellion and Greta Thunberg. I’m trying to give headspace to people who are changing the world for the better and inspiring others.

Let’s talk Bohemian Rhapsody. How was that experience?

Fun, fun, fun. Rami Malek was very kind and generous. My friend, the amazing Polly Bennett, who was movement director on the film – also movement director for Botticelli in the Fire– was on set, so I thoroughly enjoyed hanging out with her. I loved it. There is literally nothing not to love about being in a big movie, although the fake beard was a bit itchy.

Did you feel pressure in portraying Kenny Everett? He meant a lot to an entire generation of gay men.

I can’t say whether I felt pressure to please any particular expectations. I don’t really have any control over whether people will like a performance that I give, I just do my best. I had been fascinated by Kenny as a little boy, and loved watching him on TV, so I felt like I had a pretty good sense of his character, which is what I tried to bring to the table. I didn’t try to do an impersonation so much as attempt to animate the spirit I had found so compelling in him, and which I felt I had something of within me.

You seem to be making a habit of playing real people. Do they present an alluring challenge?

I have quite accidentally played a lot of real life figures, you’re right. I’m not actually sure why that is. It isn’t a conscious strategy, and I haven’t given it a whole lot of thought. Having said that, I did hang out with Renée Zellweger when she was preparing for Judy and we talked about the magnetic pull of certain cultural figures, and about a shared desire to honour the memories of those who’ve come before. So, that may be at the heart of it.

It is neither straight, nor forward. And because I’m currently inside the experience, it’s also quite hard to describe. What I can tell you is that it’s great fun and also very intense. In this play, Botticelli goes on quite an epic journey. It’s got the dimensions of Greek tragedy at the same time as being super contemporary.

Do you feel there’s power in queering prominent historical figures?

I do. I think it has utopian potential. Nostalgia traditionally has a conservative function, summed up in the old adage “Things ain’t the way they used to be”. But by queering history something else happens that does not necessarily privilege the way things used to be, but implies how they might become. And because the lens of history has been largely shaped by white heteronormative male forces, I think it’s important for a range of alternative voices to exercise agency in shaping other futures, by claiming authorship over their own narratives, and by occupying cultural ground that has long been inhabited by unchallenged orthodoxies.

Anything surprising you’ve learnt about Sandro Botticelli in preparing for this role?

Lots. Maybe the aspect of his personality I least expected was that he was a practical joker with a very naughty sense of humour. But the overall re-framing of Botticelli within this play has been full of surprises and re-inventions.'