FULL CAST ANNOUNCED FOR B...

FULL CAST ANNOUNCED FOR BOTTICELLI IN THE FIRE 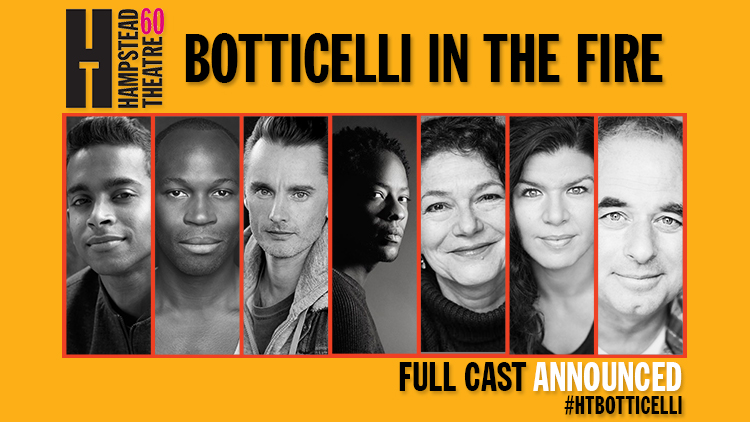 BOTTICELLI IN THE FIRE

Hampstead Theatre today announces full casting for the European premiere of Jordan Tannahill’s Botticelli in the Fire which will be directed by Blanche McIntyre. This hot-blooded and seductive reimagining of Renaissance Italy questions how much of ourselves we are willing to sacrifice when society comes off the rails. The cast will consist of Hiran Abeysekera, Stefan Adegbola, Dickie Beau, Adetomiwa Edun, Louise Gold, Sirine Saba and Howard Ward.

Florence, circa 1482. Playboy Sandro Botticelli has it all: talent, fame, good looks. He also has the ear - and the wife - of Lorenzo de Medici, as well as the Renaissance’s hottest young apprentice, Leonardo.

But whilst he is at work on his breakthrough commission, ‘The Birth of Venus’, Botticelli’s devotion to pleasure and beauty is put to the ultimate test. As plague and dissent sweep through the city, the charismatic friar Girolamo Savonarola starts to stoke the fires against the liberal elite. Botticelli finds the life he knows breaking terrifyingly apart, forcing him to choose between love and survival.

Jordan Tannahill is a Canadian playwright, novelist, and director. His plays have been translated into multiple languages and widely honoured. Jordan is the youngest two-time winner of a Governor General's Literary Award, the preeminent state-sponsored literary honour in Canada, having won for his plays Botticelli in the Fire and Sunday in Sodom in 2018, and Age of Minority: Three Solo Plays in 2014. His plays, performance texts, and productions have been presented at venues including the Young Vic, Sadler's Wells, The Kitchen (NYC), The Lincoln Centre (NYC), Festival d'Avignon (France), Volkstheater (Vienna), Canadian Stage (Toronto), The National Arts Centre of Canada (Ottawa), The Edinburgh International Festival and the West End. His books include the autofiction novel Liminal (House of Anansi, 2018), and Theatre of the Unimpressed: In Search of Vital Drama (Coach House Press, 2015). His virtual reality performance Draw Me Close, produced by the National Theatre and the National Film Board of Canada, was presented at the Tribeca Film Festival and Venice Biennale in 2017, and ran at the Young Vic earlier this year. Jordan has also worked in dance, most recently writing the text for Akram Khan's celebrated pieces Xenos and Outwitting the Devil, both currently touring internationally. From 2012 - 2016, in collaboration with William Ellis, Jordan ran the alternative art space Videofag out of their home in Toronto’s Kensington Market neighbourhood. Over the four years of its operation, Videofag became an influential hub for queer and avant-garde work in Canada. The Videofag Book was published by Book*hug Press in 2017.