FULL CAST ANNOUNCED FOR EITHER 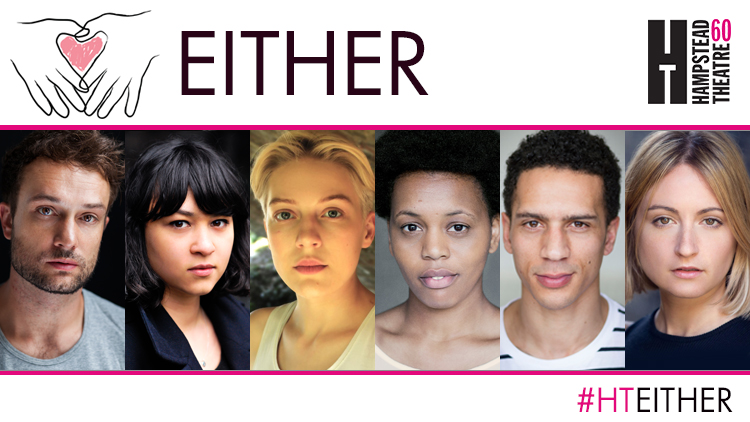 ‘I can feel myself changing. In a way I haven’t done since, adolescence maybe. But the catalyst is you instead of overactive glands’

Funny, playful and intimate, Hampstead Theatre today announces the casting for the world premiere of Ruby Thomas’ first full-length play that probes our romantic choices in life and explores the human need to connect and be loved - regardless of the ramifications or gender... Joining the cast will be Gabriel Akuwudike, Patrick Knowles, Isabella Laughland, Bianca Stephens, Lizzy Watts and Tilda Wickham.

A young, loved-up couple are surrounded by life’s infinite possibilities and temptations. And at a time in their lives where they have little responsibility, they’re determined to live this chapter as fully and spontaneously as possible. But in their pursuit to enjoy all that life has to offer, should every opportunity that comes their way be taken?

Ruby Thomas has had short plays performed at the Old Red Lion, Platform Southwark, the White Bear and Theatre503. She was on the Soho Writers Lab course (2016-17) and the Royal Court Supergroup (2018-19). Her web series Settling was released in March 2019.

Guy Jones trained at the University of Manchester and on the National Theatre Directors Course. His directing work includes Out of Water and Mayfly (both Orange Tree); Busking It (HighTide/Shoreditch Town Hall); Disnatured (Shakespeare in Shoreditch Festival) and Spokesong (Finborough). As Staff Director at the National Theatre he directed Saint George and the Dragon; and as Assistant Director at the RSC he assisted on Cymbeline and Always Orange. Guy is Literary Associate at the Orange Tree and has been an Associate Artist at Company Three. Dramaturgy work elsewhere includes There There, Stranger (Sadler’s Wells) and The Armour (Langham Hotel). He was shortlisted for the JMK Award in 2016.