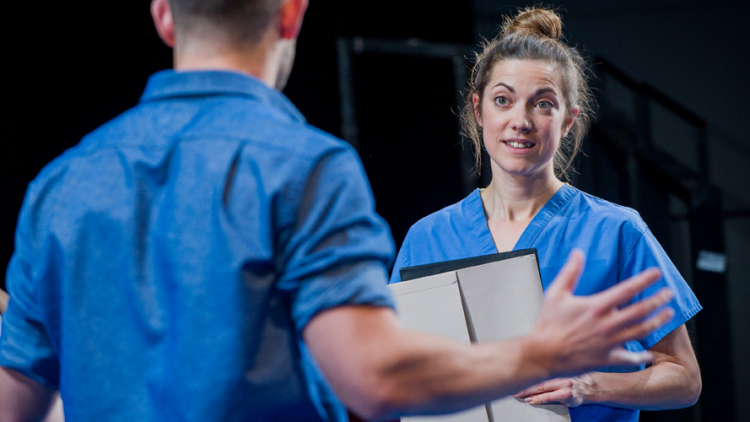 'The overworked and underfunded NHS is on our minds more than ever before. As part of its free digital streaming series in partnership with The Guardian, Hampstead Theatre has made available Nina Raine's stirring medical drama Tiger Country on its website.'

'Written and directed by Raine, Tiger Country gives the viewer a glimpse into daily life in an NHS hospital in London during a hectic December. We follow several characters, from consultants to nurses, working to treat the nation. With a blend of humour and high drama, the piece shows the reality of working in a health service under strain.'

'Ruth Everett gives an emotive performance as eager junior doctor, Emily, and portrays the struggle to balance saving every life with staying late and maintaining her relationship with colleague James (Luke Thompson). Thompsons chemistry with Everett displays the highs and lows of a same-sector romance.

Jenny Galloway steals some scenes as Olga the nurse and Gillian, a patient who is recovering her ability to speak. Maxwell Hutcheon gives a gently charming performance as her husband, other patients and an anaesthetist.

Indira Varma is suitably fiery and frustrated as Vashti, a surgeon, pulled in many directions. The stand-offs with her mentee, senior house officer Mark (Nick Hendrix), provide some of the tenser moments in the piece.

A particularly poignant scene between John (Alastair Mackenzie) and Brian (Shaun Parkes) explores the grey area that occurs when the doctor becomes the patient. Parkes also provides one of the earlier lighter moments in the play by his music choice during surgery.'

'Choreography by Leon Baugh transforms the stage into a busy bustling hospital and video design by Dick Straker makes good use of medical images to immerse the audience in the clinical setting. Neil Austin's lighting design effectively mimics flickering fluorescent bar lights and use of NHS blue keeps the show on brand.'

'Lizzie Clachan's design mirrors the plain clinical backdrop of a hospital, giving a flexible space for moving between operating theatres and consultant offices with the use of a few additional set pieces, speedily wheeled into place by the cast.'

'Sound design by Fergus O'Hare blends tannoy announcements with sirens yet doesn't completely overpower the voices of the cast. The filming of this production gives a good balance of wider and close up shots to capture the collective chaos and individual monologues.'

'The series of overlapping stories works well... While the tone becomes more serious as the play progresses, it highlights the cumulative effect of the pressure the staff are under - without any mention of a pandemic.

It portrays events seen in hospitals up and down the country without shoehorning references to transient political figures.'