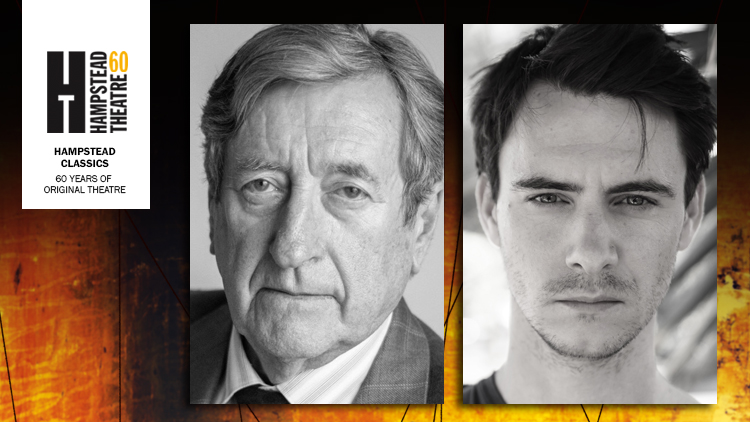 “We’ve proved ourselves before now, haven’t we? We’ve always done our job. What’s he doing all this for? What’s the idea? What’s he playing these games for?”

Hampstead Theatre, has announced the full cast and creative team for Nobel Prize-winning writer Harold Pinter’s timeless black comedy The Dumb Waiter which will run from 19 March until 18 April 2020.

Acclaimed stage and screen actors Philip Jackson and Harry Lloyd will play the roles of Ben and Gus, respectively, in this 60th anniversary production which marks the play’s world premiere at Hampstead Theatre.

Philip Jackson is known to television audiences as Chief Inspector Japp in the long-running and highly successful Agatha Christie ITV series Poirot.  Other screen credits include My Week with Marilyn, Brassed Off and Little Voice. Theatre credits include Willy Loman in Death of a Salesman at the West Yorkshire Playhouse.

Jackson will be joined by Harry Lloyd, known to Game of Thrones fans as Viserys Targaryen in the HBO series and as Will Scarlett in the 2006 BBC drama Robin Hood.  Other screen credits include, Doctor Who, and The Theory of Everything and he is soon to appear in an American TV adaptation of Aldous Huxley’s sci-fi dystopian novel Brave New World.  Theatre credits include Good Canary at The Rose, Kingston and Ferdinand in The Duchess of Malfi at The Old Vic.

The Dumb Waiter, originally presented in Hampstead Theatre’s first ever season directed by its founder Artistic Director, James Roose Evans, received its world premiere in January 1960.  Alice Hamilton will direct the 60th anniversary production, after her recent success at the theatre with the Olivier-nominated Every Day I Make Greatness Happen (2018) and Paradise (2019).  Alice is co-Artistic Director of Up in Arms and other directing credits include Blood Wedding (Salisbury Playhouse), The Weatherman (Park Theatre) and While We’re Here (Bush Theatre).  She will be joined by designer, James Perkins, with lighting design by James Whiteside and composition & sound design by Giles Thomas.

Alice Hamilton, Director of The Dumb Waiter said: “I am so excited to be making my debut on Hampstead Theatre’s Main Stage with this brilliant play. This savagely funny two-hander is generally held to be one of the masterpieces of the last century, and I can’t wait to explore it with these two wonderful actors.”

Roxana Silbert, Artistic Director of Hampstead Theatre, said “I am delighted to be opening Hampstead Classics with this remarkable play and once again sharing Pinter’s sharp wit with Hampstead audiences.”

The Dumb Waiter will open Hampstead Classics, its spring/summer programme, to mark its 60th anniversary and celebrate its ambitious history as a new writing theatre.  Featuring four bold plays which all premiered at the theatre, the productions will be performed in chronological order and staged on the thrust, by a variety of distinctive British directors.  Sam Yates will make a highly anticipated return to Hampstead Theatre with Tennessee Williams’ The Two Character Play from 24 April until 23 May, founder and former Artistic Director of Eclipse Theatre Company Dawn Walton will direct Alfred Fagon’s remarkable tribute to the culture of London’s King’s Road in the 1970s, The Death of a Black Man running from 28 May until 27 June and Roxana Silbert, Hampstead Theatre’s Artistic Director, will direct Marsha Norman’s ground-breaking ‘night, Mother running from 2 July until 1 August.

Film work includes The Wife; Philophobia; Anthropoid; The Theory of Everything; The Riot Club; Big Significant Things; Narcopolis; Closer to the Moon; The Iron Lady and Jane Eyre.

She worked as Staff Director on Man and Superman at the National Theatre, and has directed development workshops and rehearsed readings with the Royal Court, National Theatre, Salisbury Playhouse and High Tide. Alice is co-artistic director of Up in Arms.

Harold Pinter (Playwright)
Harold Pinter was born in London in 1930. He lived with Antonia Fraser from 1975 until his death on Christmas Eve 2008.

After studying at the Royal Academy of Dramatic Art and the Central School of Speech and Drama, he worked as an actor under the stage name David Baron. Following his success as a playwright, he continued to act under his own name, on stage and screen. He last acted in 2006 when he appeared in Beckett’s Krapp’s Last Tape at the Royal Court Theatre, directed by Ian Rickson.

He wrote twenty-nine plays including The Birthday Party; The Dumb Waiter; A Slight Ache; The Hothouse; The Caretaker; The Collection; The Lover; The Homecoming; Old Times; No Man’s Land; Betrayal; A Kind of Alaska; One For the Road; The New World Order; Moonlight and Ashes to Ashes.  Sketches include The Black and White; Request Stop; That’s your Trouble; Night; Precisely; Apart From That and the recently rediscovered, Umbrellas.

He directed twenty-seven theatre productions, including James Joyce's Exiles; David Mamet's Oleanna; seven plays by Simon Gray (one of which was Butley in 1971 which he directed the film of three years later) and many of his own plays including his last, Celebration, paired with his first, The Room at The Almeida in the spring of 2000.

He wrote twenty-one screenplays including The Pumpkin Eater; The Servant; The Go-Between; The French Lieutenant's Woman and Sleuth.

In 2005 he received the Nobel Prize for Literature. Other awards include the Companion of Honour for services to Literature, the Légion d’honneur, the European Theatre Prize, the Laurence Olivier Award and the Molière d’honneur for lifetime achievement. In 1999 he was made a Companion of Literature by the Royal Society of Literature. Harold Pinter was awarded eighteen honorary degrees.

Work for Tall Stories Theatre Company includes The Gruffalo; The Gruffalo’s Child; Room on the Broom and The Snail and the Whale.

The Dumb Waiter plays on the Main Stage from 19 March - 18 April.