THE HAYSTACK: ★★★★ FROM THE GUARDIAN 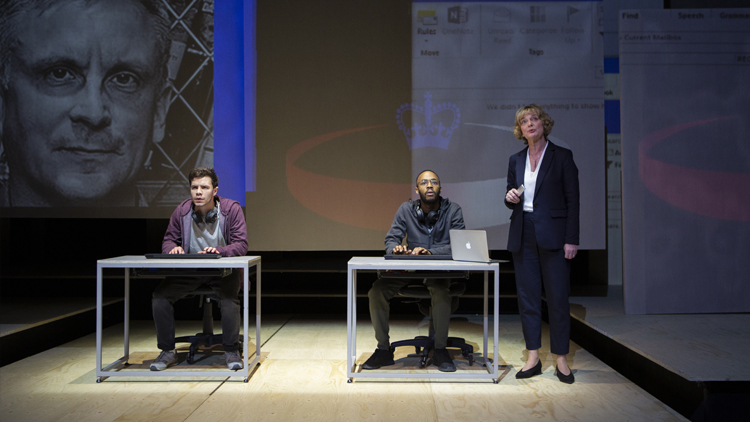 'Al Blyth’s debut play explores how far into the lives of citizens a state can pry, and the effects on the snoopers themselves'

'After the movie Official Secrets, about the Observer’s engagement with a GCHQ whistleblower, comes Al Blyth’s debut play The Haystack, in which a fictional Guardian reporter and home affairs editor deal with a leak raising multiple ethical issues. In Official Secrets, the dangerous information came from the state snooping centre in Cheltenham; in The Haystack two junior spooks at GCHQ, nerdy Neil and laddish Zef, are charged with finding out where Guardian writer Cora is getting her scoops about Middle East politics.'

'...Roxana Silbert’s staging becomes searingly theatrical in scenes that dramatise the double lives of spies by having characters simultaneously conducting conversations in different locations. John le Carré himself might admire the standout dialogue in which a spy dumps his partner during a row in which lies and truths hide behind each other.'

'Rona Morison, superb in the Donmar’s The Prime of Miss Jean Brodie, excels again as the gutsy but too trusting Cora. Oliver Johnstone and Enyi Okoronkwo, as the sneak-geeks, convey the painful moral consequences of voyeurism, even when it’s for work. Lucy Black’s high-up hack and Sarah Woodward’s top spook occasionally seem too similar in their ambitious pragmatism but a sly point may be intended about the overlaps between newspapers and the state. This pacy, brainy surveillance thriller should be widely watched.'

To read the full review visit The Guardian online here.

The Haystack runs on the Main Stage until 7 March.