THE DIARY OF AN ASSISTANT...

THE DIARY OF AN ASSISTANT DIRECTOR: THE TYLER SISTERS 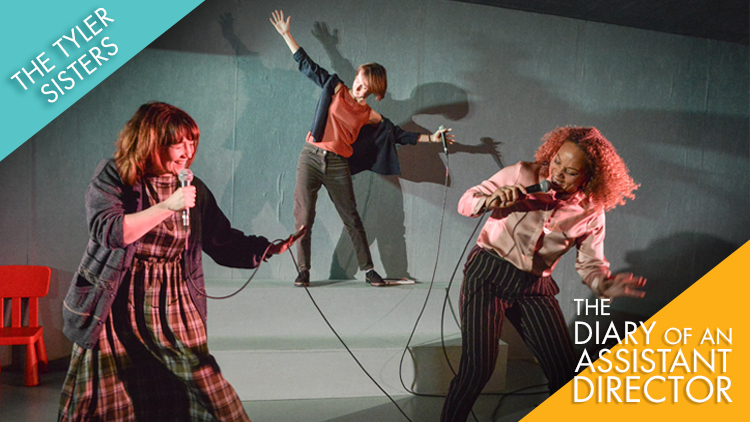 Celine Dion, interpretive dance and scaling sofas. Take a sneak peek behind the scenes with our Resident Assistant Director Lizzie Manwaring as she reflects back on the process of Alexandra Wood's heartening new play, The Tyler Sisters.

On our first prep day, Abigail (Director) and I discussed how the big events aren’t always the ones that stay with us the longest. I remember Christmas two years ago predominantly by the fact that my Dad managed to drive from South West Wales to Stansted in under three hours. We’re still not quite sure how he did it. Or, like in The Tyler Sisters, you might remember your Dad’s retirement party because your sister shared half a cereal bar with you when you were starving. As the final performance of The Tyler Sisters looms, I’ve started thinking about how it’s often the smaller moments, like my Dad’s dangerous driving overshadowing the rest of the Christmas holiday, that stay with us the longest.

Though the first read through, first run, first preview and press night were all monumental, they aren’t necessarily the moments I’d go to. So, like in the play, here’s my four vignettes to represent the four weeks of The Tyler Sisters rehearsals.

Following the photos around the room

The Tyler Sisters was inspired by The Brown Sisters; a project by photographer Nicholas Nixon who took a picture of his wife and her three sisters every year for 40 years. We printed out all the images and had them curling around the blue walls of the rehearsal room in chronological order.

When we first looked at them, we are all struck by the stories that can be told in a mere photo. We noticed how from 2004 to 2006, the sister further to the right in the The Brown Sisters series has turned her head away from the others. After years of looking directly at the camera, this subtle shift was emphasised and naturally we started wondering about the story we were seeing.

We were also struck by how you hardly notice the ageing of the sisters until certain years. Once we’d made this discovery, we wanted to harness it in our staging, especially through costume, so in our production the ageing is a subtle gradient until we hit certain spikes. For example, because Katrina (the youngest sister) is so affected by her parents moving out of her childhood home in 2001, we see her remove the hoodie she had been wearing since the beginning of the show to reveal a satin blouse, representing her suddenly having to grow up.

The play is composed of scenes which move chronologically from 1990 to 2030. During rehearsals, in the morning and after lunch we’d do our warm-up to a playlist of ‘The Year-We-Are-About-To-Do’s Greatest Hits’.

On Day 2, we were preparing to rehearse the year 2001 which, in the script, features ‘Gail’ (the middle sister, played by Bryony Hannah) roller-skating to It’s All Coming Back To Me Now. So, Meg (our Stage Manager) added that song to the playlist (though technically it was released in 1996!). What started as moving around the room stretching quickly, turned into everyone prancing around the room like gazelles. We were all channelling our inner Celine Dion performing at Wembley (should Celine also chose to perform with interpretive dance). Once the song ended there seemed to be a major sense of catharsis and joy in the room. It was such a fantastic moment of complicity and bonding amongst the ensemble and also a pivotal moment in establishing the Tyler sisterhood.

With a play which travels through time and locations, we began looking at the emotional and metaphorical truth of the scenes rather than just their naturalistic truth. Once that groundwork had been laid down, we’d move to jumping up on our feet and thinking about what the ‘emotional staging’ would be. For example, when Angela Griffin as Katrina was wearing her hoody, during a scene where Katrina was dealing with the loss of a friend, she pulled its strings to hide herself.

Abigail and Angela (Movement Director - there are two Ange’s on Team Tyler) encouraged the actors to think about what these gestures meant and what the spatial relationships between sisters were when exploring the scenes. During a scene which reveals that Gail has been going to chemotherapy recently and that her boyfriend had dumped her when he found out, Bryony was sitting on the floor. Towards the end of Katrina’s big monologue, talking about the ways she was going to enact revenge Gail’s ex, Caroline Faber (playing the eldest sister, Maddy) walked over to Bryony, scooped her off the ground, carried her over to the set’s steps and cradled her in her arms. Moments later, she delivered the line “He isn’t worth it”. The gesture floored everyone watching it; I remember Caroline describing it like Maddy felt like a bear wanting to protect Gail.

A scene in the play sees the women resting having reached the top of Ben Nevis. In rehearsals, this was quickly represented by the three sisters sitting on the sofa. Jump to tech rehearsal and Abigail suggests that the women climb and sit on top of the sofa. I remember the moment feeling like my mind blowing - of course! I’m sure reading this, it doesn’t sound too impressive or perhaps quite obvious. However, when you are deep in the rehearsals of a play and you think you know it inside out, the smallest discovery can speak monuments to a team. It’s the only time we now use the sofa in this way. In the set, it brings the sisters closer to the glow-in-the-dark stars and allows you to see their three shadows on the wall behind them. The silhouette of three sisters looking up at the stars.

This is my favourite image when watching the play and I look forward to seeing it every time I sit in. I encourage you to look out for it too!