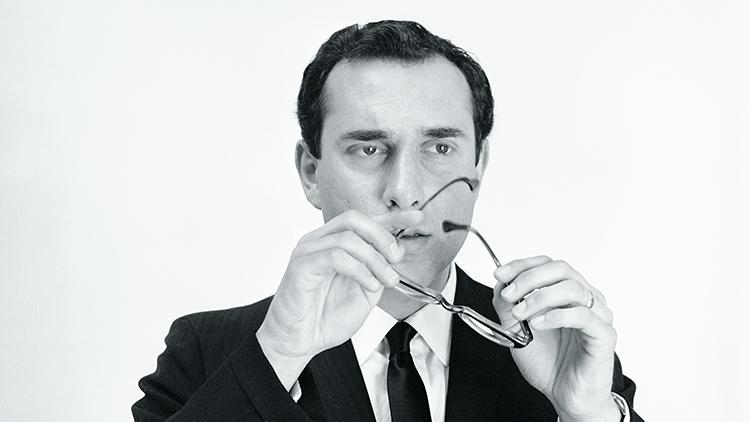 For much of the 1950s, Harold Pinter sought employment as an actor under the stage name David Baron. At the beginning of the decade, he was playing support roles in Shakespeare and other classical dramas in the repertory companies of Andrew McMaster and Donald Wolfit. By the middle of the decade, he performed in touring murder mysteries and light comedies in provincial theatres. He wrote his first play himself at the behest of his old Hackney friend Henry Woolf, who was looking to put on something as part of the MA course he was studying in Bristol. It was here that The Room was first performed in 1957, which gave Pinter the impetus to continue writing for the stage. He used his down time in dressing rooms and touring digs over the course of the year to compose his next plays, and wrote to Woolf in September mentioning that he had drafted two dramas called The Party and The Shaft (most likely early drafts of The Birthday Party and The Dumb Waiter). 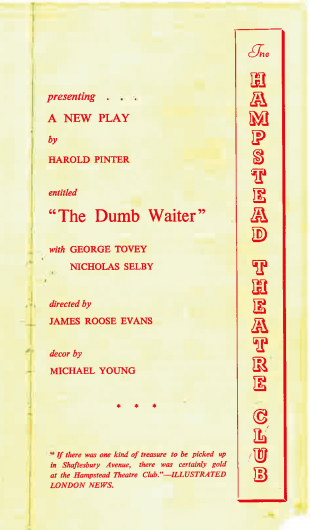 In early 1958, Pinter was employed to understudy at the Royal Court and, having found an agent, had recently secured a production of The Birthday Party that would open at the Lyric Hammersmith in May that year, his London debut. It must have seemed that everything was going the right way for the young writer and actor. But his play was not well received:

‘Sorry, Mr. Pinter, you’re just not funny enough’ was the blunt title of one review, while the author of another complained that the play ‘wallows in symbols and revels in obscurity’. With the production brought to an abrupt halt after a mere eight performances on the back of that kind of critical drubbing, Pinter’s hopes seemed dashed. He was to find an immediate outlet for his writing on the radio, then television, and his next stage work, The Dumb Waiter, was presented in Frankfurt in 1959, before its English Language premiere at the Hampstead Theatre Club in January 1960. It was with this production (which subsequently transferred to the Royal Court), and the popular and critical success of The Caretaker later that year that Pinter’s reputation as we might now recognise it was properly forged.

Left: The original programme cover for The Dumb Waiter at Hampstead Theatre Club in 1960

What was it about the critical and artistic context of the late 1950s that meant Pinter’s early work were not fully embraced? After all, the London theatre had received a fresh shot in the arm from other writers of his generation, the 'angry young men and women' and 'kitchen sink dramatists' who wrote characters who spoke everyday dialogue in working-class domestic environments, not so distantly removed from the kinds of formats that Pinter was exploring. The history books tend to point to the 1956 Royal Court production of John Osborne’s Look Back in Anger as the turning point, when a predominately commercial industry that had until then tended to play safe with staging the Terrence Rattigan / Peter Ustinov / Agatha Christie middle-class environments of drawing rooms with French windows abruptly discovered the voice of the post-war, state-educated working-class cohort. Theatre criticism that championed the new social realist writers of the 1950s mobilised the words ‘alive’, ‘living’ and ‘vitality’ to describe the works of these young engaged dramatists. In 1956, the theatre magazine Encore even changed its subtitle to ‘The Voice of Vital Theatre’. That drive for ‘vitality’ might be sourced to a 1955 symposium, ‘Cause without a Rebel’, arranged by Encore to discuss the state of British theatre. There, the influential critic Kenneth Tynan lamented the lack of a tradition of political theatre and the American playwright Arthur Miller suggested that, sadly, ‘British theatre is hermetically sealed against the way society moves’. The call for more social realism in writing for the stage was debated alongside a need for promotion of new writing and the development of new audiences.

Pinter himself was distrustful of the ‘vital’ theatre, and in his 1962 speech to the National Student Drama Festival, ‘Writing for the Theatre’, he provocatively looked back on the social realist ‘preference for "Life" with a capital L, which is held up to be very different to life with a small l, I mean the life we in fact live’. In the context of its time, this statement was very clear: Pinter was positioning himself as having outright rejected the repeated call for the ‘life’ and ‘vitality’ that had become part of the vocabulary of the new movement. This dismissal of a movement that demanded, as he argued, ‘some kind of clear and sensible engagement to be evidently disclosed in contemporary plays’ set him very clearly apart from his contemporaries:

‘If I were to state a moral precept it might be: beware of the writer who puts forward his concern for you to embrace, who leaves you in no doubt of his worthiness, his usefulness, his altruism’, he countered.

More than once, he found himself challenged on his position:  in an article in The Jewish Chronicle in 1960, Arnold Wesker questioned Pinter’s seemingly deliberate obscurity and mobilising of what he dismissed as ‘fables’ in his plays: ‘Pinter is a Jewish writer and [The Birthday Party is] a play out of his experience in the Jewish community […] The interrogation of Stan could have taken place in the Jewish Board of Guardians […] The world is complicated and we demand of art a clarification. […] It should all have taken place in a Jewish setting’.  When a journalist from the same journal pursued this issue with him he responded clearly that he had ‘no desire to write a whole play about Jews or a Jewish situation.’ In other words, contrary to what Wesker and other ‘angry young men’ demanded, his plays were not concerned with representing the plight of identifiable victims nor with appealing for corrective measures.

Pinter’s inclusion by the critic Martin Esslin within a group of writers producing a ‘Theatre of the Absurd’ only exacerbated this impression that Pinter was not a political writer, something he very much later rejected: his early work was political, just not in the way that was in mode. Instead his first works were composed to demonstrate the construction of victimhood by authoritative systems. The Dumb Waiter, The Birthday Party and The Room all very clearly consider and expose our relationships with authority and how that impacts on our interpersonal lives, but they failed the zeitgeist of ‘vital’ theatre by not naming the oppressors, but not localising the issues they demonstrated.

Esslin’s book first appeared in 1961, and offered a thesis for how writers such as Samuel Beckett, Eugène Ionesco, Arthur Adamov and Jean Genet had collectively tendered ‘a new language, new ideas, new approaches, and a new, vitalized philosophy to transform the modes of thought and feeling of the public’. Though Pinter’s early work was the basis of a smaller chapter in Esslin’s book (he was only promoted to one of the main writers of the absurd in the third edition in 1983, no doubt for straightforwardly commercial reasons), his writing could only partially intersect with this grouping, his concerns being ultimately more with human inter-relationships than the existential crises of Beckett, Adamov and Ionesco. Certainly, Beckett had been a significant influence on the young Pinter, and the two men later became corresponding friends, but while Beckett’s writing foregrounds and  ridicules the human craving for finding meaning and purpose, Pinter’s work rather considers the emotional impact of such cravings, and the consequences for our attempts at union, of taking care of one another.

Reviewing the double bill of The Room and The Dumb Waiter in 1960, Tom Milne in Encore praised their ‘relevance to the problems aroused by our particular society, and our relationship with that society’ and, in his essay ‘Comedy of Menace’, Irving Wardle considered how in The Birthday Party Pinter evoked a quality of menace, tempered with comedy, which ‘stands for something more substantial: destiny.’ He argued for an understanding of the play that appreciated the responsibilities we hold to ourselves and to others. This was the original application of the term ‘comedies of menace’, which has since so often been co-opted to substantiate the ‘absurd’ aspects of Pinter, rather than the ideological position that Wardle detected.

Whatever the impact that Osbourne’s Look Back in Anger arguably had on the art of writing for the stage, the impact of the 1955 London premiere of Beckett’s Waiting for Godot was of equal or greater significance. If the so-called kitchen sink dramatists had brought social realism to the table, the so-called absurdist writers brought a formalistic revolution, whereby the affect that a play might have was part and parcel of its articulation: you slowly begin to realise that Godot will never arrive; you come to terms with how meaning and purpose are elusive. Pinter’s early work including The Dumb Waiter clearly had a foot in both camps, while belonging properly speaking in neither.

It looked and sounded like social realism, adopted the characteristics of popular thrillers (slowly building to a climactic scene of revelatory crisis) but the characters on stage do not explain their motivations or objectives, and we consequently experience their plight alongside them.

The Dumb Waiter now runs on the Main Stage from 18 - 31 January. This article will be available in the show programme, which audiences can purchase for £3.50.