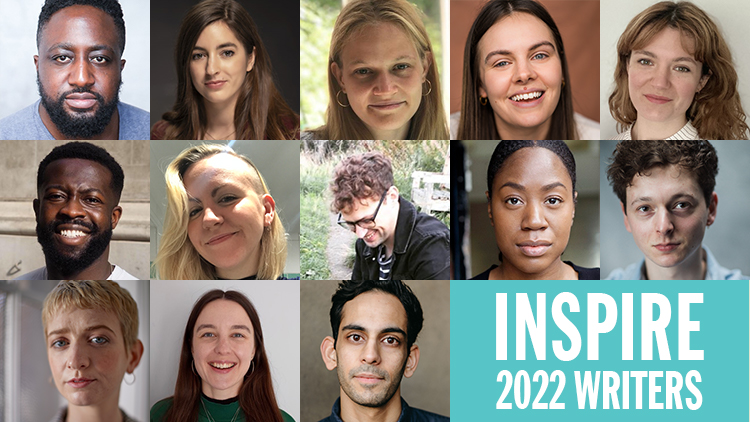 INSPIRE is a year-long programme where a group of writers compose a full-length play mentored by the award-winning playwright Roy Williams and Hampstead’s Literary Department. INSPIRE also provides tailored talks by the country's best writers, one-to-one dramaturgical sessions and readings of new work.

Roy Williams, Mentor of INSPIRE said: 'This is our fourth year of INSPIRE and the quality of writers is as high as ever. I'm so excited to be working with this group to shape and develop new plays which speak to the modern world. They couldn't be more different and have more diverse interests, but every one is an artist worth taking note of. Looking forward to the year ahead!'

Dexter Flanders
Dexter trained at RADA. In 2019 he was chosen to participate in the Royal Court Theatre’s Introduction to Playwriting Group. In 2021 Dexter received a bursary from Sam Mendes’ company Neal Street. Current commissions include a drama pilot which has been picked up by Neal Street and he’s is writing a feature for Blue Story producer Joy Gharoro-Akpojotor. He’s been in writers rooms for Sky, Gaumont and Netflix. Foxes, his debut play, was on at Theatre 503 & Theatre Peckham in 2021 and was a finalist for the Alfred Fagon Award for Best New Play by a Black British Playwright. He’s also published by Methuen.

Jessica Norman
Jessica Norman is an award-winning writer for stage and screen. Her first play Wilding, written on the Soho Theatre Writers' Lab, was shortlisted for the 2019 Papatago Award and long-listed for the 2020 Women’s Prize for Playwriting; her second play This Little Earth, which premiered at The Arcola in 2019, was long-listed for the 2021 Women’s Prize, and is now in development, supported by Arts Council England. Her short film Embraceable You, written and filmed during lockdown, won ‘Best Isolation Short’ at the LA Motion Picture Festival and, in 2020, she was a finalist for the BBC Drama Writers’ Academy. Other screen work includes Love in Lockdown (KickitDown Productions) and Carlisle House, in development with co-writer Rebecca Crookshank. She also has eight years’ experience as a creative producer and dramaturg, making work for the UK’s top theatres and independent companies, including The Old Vic and Sonia Friedman Productions. Highlights include working closely with Russell Brand, Lolita Chakrabarti, Adrian Lester and Maxine Peake on One Voice for The Old Vic and working on the development of Jack Thorne, John Tiffany and JK Rowling’s Harry Potter and the Cursed Child.

Martha Watson Allpress
Martha Watson Allpress is a writer and actor from the East Midlands, currently based in London. Her debut play, Patricia Gets Ready (for a date with the man that used to hit her), transferred with the Pleasance, from a sell-out run at the Vaults, to the Edinburgh Fringe. There it received 5-star reviews from The Guardian and The Stage, and is currently being developed for screen. Her shorter works include Wild Swim (Papatango), Call Me Maybe (Arcola) and Contains Adult Themes and Violence (Gatehouse). As an actor, Martha recently graduated from the Royal Central School of Speech And Drama's BA Acting programme, and was part of the inaugural group of Open Door. In her writing, Martha's aim is to explore the nuances of shame and anger with a female-centric lens. That, and play as many banging tunes as possible.

Mary Antony
Mary is a writer and actor based in Oxford. Her debut play Childish was performed as part of the Actors Centre John Thaw Initiative in 2019, and she wrote the short film toni_with_an_i (BBC, BFI) which was nominated for Best Short Programme at the 2020 TV BAFTAs. She is currently developing and writing toni for TV with Camden Productions (This Country). Her acting credits include Darkest Hour (Working Title), Father Brown (BBC Studios), Killing Eve (BBC America) and Brexit: The Uncivil War (Channel 4).

Nana-Kofi Kufuor
Nana-Kofi Kufuor is a Ghanaian-British writer from Stockport. He attended the University of Cumbria studying Film and Television production and then Salford University completing a masters in Screenwriting for Film, Radio and Television. Kofi’s recent play My Voice Was Heard But Was It Ignored was performed at Leeds Playhouse and The Crucible in Sheffield among others. He has worked with The Royal Exchange Theatre, Red Ladder, Oldham Coliseum and is currently working with Silent Uproar on a new piece.

Nancy Netherwood
Nancy is a playwright and screenwriter based in South East London. She has been shortlisted twice for the Channel 4 Screenwriting course and has had plays produced at the Old Red Lion Theatre and North Wall Arts Centre. Nancy was a writer in residence at the North Wall for their Catalyst Festival in 2019, and part of the London Library Emerging Writers Programme 2020-2021. Her work uses genre conventions to explore heredity, mental illness and queer narratives.

Nic McQuillan
Nic McQuillan is a writer from London. He has had work produced across the UK, including Tobacco Factory Theatres, HOME, Theatre503 and the New Diorama. He is one half of Kopfkino, whose shows The Bearpit and The Grand Scheme of Things toured the UK after premiering at the Edinburgh Festival Fringe. They have twice been nominated for the New Diorama UNTAPPED award.

Nicola May-Taylor
Nicola is an actress and emerging writer from London. Nicola has worked extensively as an actress and previously performed at Hampstead Theatre in the production of The Hoes. Other credits include Rutherford and Son (National Theatre), Macbeth (Royal Exchange Theatre Manchester) and Teenage Dick (Donmar Warehouse). She began writing in 2018 after taking part in the Vaults New Writers group and is currently developing her second play The Salon, which was long-listed for the Royal Court writers' program and most recently received Arts Council funding and dramaturgical support from Soho Theatre. Nicola has just released her first short film Adjustments that she wrote and stared in, which will be debuting on London Live TV in 2022.

Patrick Swain
Patrick is a film director and writer for stage and screen. Hailing from Stockport, he trained at the University of Exeter, and was a member of the National Theatre's Young Writers program in 2019. He is the Literary Manager for Caged Bird, with whom he made Neon (2018), and workshopped his scripts Descent (2020) and Symbiont (2020), the latter of which is to tour in 2022. Other work includes Angelus (Theatre with Teeth, 2018), a production of Hamlet (Stratford Playhouse, 2019), and the short film Petrol Head, which begins production in early 2022. He is currently studying an MFA in Writing for Stage and Broadcast Media at the Royal Central School of Speech and Drama.

Phoebe Frances Brown
Phoebe Frances Brown is a writer and actor from Nottingham, currently living in London. As a writer Phoebe’s recent credits include the stage play and the screenplay for The Glad Game at Nottingham Playhouse and has toured to MAC Birmingham, Hampstead Theatre and Manchester Contact Theatre. She was commissioned by BBC New Creatives and Rural Media to write and perform in a comedy short, Hung Out To Dry, hopefully showing on BBC iPlayer 2022. Her comedy troupe Major Labia are an associate company of the Nottingham Playhouse; they have successfully received BFI Short Film Funding for their next project. As an actor she works in theatre, comedy, radio and television. Her most recent theatre credits include Small Island and If We Were Older at the National Theatre and she has performed at New York Theatre Workshop, Donmar Warehouse, Soho Theatre, Birmingham REP, Nottingham Playhouse, Leicester Curve and at the Edinburgh Festival Fringe. She recently filmed Animal Antics which premiered at the BFI London Film Festival, 2021. For radio, she played the role of Constance Pettigrew in the BBC Radio 4 series Home Front.

Sarah Power
Sarah Power is a playwright and software developer from London. Her debut play PIG ran at Liverpool’s Royal Court Theatre in September 2019 and was longlisted for BBC Drama Room. Sarah’s second play Mandrake was recently a finalist in the Hope Mill Theatre’s Through the Mill playwriting competition and longlisted for the Women’s Prize for Playwriting. Her short plays have been performed at the Bunker, the Arcola and the Everyman Theatre Liverpool.

Sid Sagar
Sid is an actor and writer from Hertfordshire. He grew up abroad and has lived in England since the age of eight. He studied at the University of Bristol and trained with the National Youth Theatre and the Writers' Lab at Soho Theatre. As a playwright, his first full length play was one of the winners of Rose Theatre Kingston's New Writing Festival. He's currently an Associate Writer at Middle Child and was recently commissioned by the Almeida Theatre as part of the Genesis New Playwrights programme. As a screenwriter, he has co-written projects for TV in development with SLAM Films and his first short film is in development with BFI NETWORK.

Joining the programme is by invitation only. Any writer who would like to be developed by Hampstead Theatre is encouraged to submit a script via our Open Script Submission scheme where our Literary Department can begin to know their work.

INSPIRE is made possible through the kind donations of our supporters. This year we are grateful to Rodney and Zmira Hornstein, the Garrick Charitable Trust, the Noël Coward Foundation, Fenton Arts Trust and The Harold Hyam Wingate Foundation for their generous support.