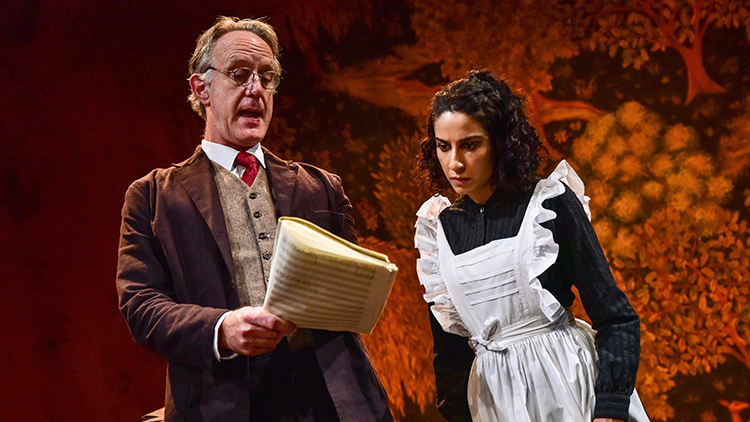 ★★★★★ 'Leyshon’s poetic way with words, the subtle modulations of Roxana Silbert’s scenically humble production and the superb, lived-in detail of the four actors hold us in thrall. This wonderful play deserves to endure.' The Telegraph

★★★★ 'A lyrical, complex celebration of Cecil Sharp' The Times

★★★★ 'Every actor shines in this beautifully brooding tale of song and sisterhood, paced to perfection by Roxana Silbert.' The Guardian

★★★★ 'A beautiful, beguiling play that captures the transcendent and transformative power of music.' Financial Times

★★★★★ 'Setting the bar for new writing impressively high with this beauty. Breathtaking writing, flawless staging. Folk deserves to be around for a very long time.' WhatsOnStage

★★★★ 'Bursts off the stage... Leyshon’s writing sings with lyricism.' The Stage

'In a cracking start to the theatregoing year, Hampstead’s studio space offers a spellbinding account of Cecil Sharp at the start of his invaluable quest to preserve English folk songs but handling them and their rustic, often female repositories with a mixture of reverence and calculation.

Leyshon’s poetic way with words, the subtle modulations of Roxana Silbert’s scenically humble production and the superb, lived-in detail of the four actors hold us in thrall.

Ben Allen completes the acting quartet as John England, nicely tilting between dependability and disreputability. Like the folk songs it so delights in, the play deserves to endure. Still, you never know, best catch it while you can.'

'Roxana Silbert’s intimate production, laced with sedate dance interludes, illuminates the character of apioneer who still arouses controversy today. Was Sharp merely a selfless champion of a fast-disappearingrural culture? Leyshon never passes judgment, and Simon Robson gives us a nuanced portrait of a man on anear-mystical quest to explore the roots of a country so often dismissed as a “land without music”.

Leyshon brings us back to the fields and cottages of a lost world.'

Folk review – a beautifully brooding tale of song and sisterhood

'This beautifully brooding slice of English pastoral places Cecil Sharp, the godfather of folk music who collected thousands of songs from rural communities, alongside two women he met in 1903. They were half-sisters, Louie Hooper and Lucy White, daughters of a renowned singer in south Somerset who, at the start of this drama, has just died, leaving them drenched in grief.

The production is paced to perfection by Roxana Silbert and full of delicate but deeply mined emotions, every actor shining in their part.

Song is finely integrated into the script with spine-tingling moments when Louie (Mariam Haque, quiveringly expressive) sings her haunting solos. Lucy (Sasha Frost, just as brilliant as the more flirtatious, frustrated sister) intermittently joins in along with her sometimes lover, John (Ben Allen), to give the play a bustling community feel.'

'We're not even a full week into 2022 and already Hampstead is setting the bar for new writing impressively high with this little beauty.

It'll be a long time before I forget Haque's spellbinding second act deconstruction of the folk song Sharp has homogenised for wider consumption, as she makes explicit the inextricable connection between the lyric and the landscape whence it was conceived. She's heartbreaking but never sentimental, which is equally true of the play and production.

Silbert's fleet, flawless staging features strong work from Ben Allen as a local lad who comes between the sisters, and Simon Robson captures the intriguing ambiguities of Sharp, his admiration for Louie ultimately eclipsed by his determination to make his own name on the back of her, and her ilk's, legacy. Gary Yershon's musical contribution is invaluable.

Like the music that inspired it, Folk deserves to be around for a very long time.'