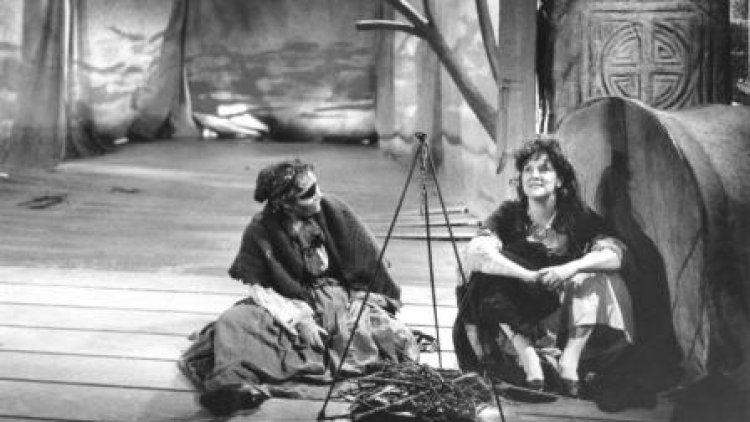 Welcome back to Hampstead Theatre Rona – how does it feel to be returning to Hampstead for Donny’s Brain? (Rona’s previous credits at Hampstead include Little Eagles (2011), Bold Girls (1990/1), The Maidenstone (1995) and Snake (1999))

It’s always lovely coming back to Hampstead. There was a period of my life when it was very much my second home and something of a refuge for me when I first found myself lost London. I’ve got extremely happy memories of the old theatre and the creative team I worked with back then. In particular I was vividly aware of then artistic director Jenny Topper’s ambition for the new space and how much love and attention was focused on every design detail of the new building. When I walk in now I always remember that because I can see it in the very fabric of the building. It always feels like a welcome. It’s a wonderful theatre space.

Is there anyone, as a playwright, who particularly inspires your writing?

No one person and certainly no one writer. However the late Angus MacVicar, a wonderful and prolific Scottish writer over seventy years was a huge and direct influence on me. He was a relative and a friend and, more than anyone, he encouraged me to believe that I could be a writer. He also taught me, by example, that being a successful writer is as much about craft and determination as anything else. It’s about communication with an audience and it’s a job.

Donny’s Brain explores the consequences of serious brain trauma on human relationships – what made you want to write about this subject in particular?

Donny’s Brain is an ongoing commission from Manhattan Theatre Club in New York. They asked me to submit ideas for their Sloan commission. In 2000, Manhattan Theatre Club began a partnership with the Alfred P. Sloan Foundation to commission, develop and produce new plays about maths, science and technology. As you might imagine I initially found this quite daunting but I soon zeroed in on neuroscience as an area I was interested in exploring dramatically. The human stories of those who have suffered brain injury raise so many questions about the nature of things we consider concrete and unchangeable, personality, emotion, perception of the world, our whole sense of self.

You’ve had shows produced on Hampstead Main Stage but this is the first show you’ve had in the (relatively new) Downstairs space. How do you think it will be different and what are you looking forward to most about working Downstairs?

No press! There are many things I adore about my job, too many to bore you by listing in full. However I’d describe my job as a bit like talking to yourself for most of the time. A lot of talking to yourself and staring into space and then there is that wonderful day when you get to talk to someone else and you meet your director. You then experience the total delight that you are not a mad person, someone else can see and respond to the story you’re trying to drag into existence. Next is the wonderful moment when you extend that conversation to your cast and see actors using their skill to bring the characters that only talked in your head into robust life and finally the audience joins in and becomes an active part of the whole amazing, fragile thing that a is a piece of theatre. It feels like that to me, like a growing, living, organic conversation, and, just at the moment that everyone is talking to each other the critics arrive and THAT feels like someone picking up a megaphone and shouting so loudly nothing else can be heard.

I am a ridiculously sentimental person but I do generally love my directors, my actors and then my audience. I may respect critics but I find it hard to love them and while I really am one of those people who never reads reviews (as opposed to one of the hundreds who CLAIM they never read reviews) I do respect their job. However it is much much easier to develop new work and be brave in your writing without the fear of that blaring megaphone drowning out the conversation! That is a very pretentious extended metaphor but I hope you get the idea!

To help create something that will leave an audience feeling genuinely glad they spent the money on the ticket.

How did you go about researching for Donny’s Brain?

I read an enormous number of books and spent many many hours on the internet. I also talked to a few very patient neurologists.

I have a private dream cast and it grows bigger all the time. Actors are the writer’s friend, they go out there and literally put themselves on the line with only the few tools, words, you gave them. I will become embarrassing if I told you the feelings this provokes within me. I have been lucky enough to work with some wonderful actors and I’m always hoping to work with them again. However it’s very difficult because they’ve usually run off and got a job in telly. I don’t know, some rubbish about needing to eat and pay the gas bill…..

You’re originally from Scotland – what do miss most about your home country now you’re living in London?

Don’t tell anyone in Scotland I’m living in London. Most people in Scotland think I’m still up there because I manage to work up there so often. I’ve been down here for nearly twenty years now and London is very much my home but Scotland is still that too. I think a lot of Londoners feel like that, so many people who live here have originally come from somewhere else, you live with a dual identity. I’ve come to love that.

You’ve written numerous play scripts but also screen plays for film and TV, including Ladybird Ladybird directed by Ken Loach, BAFTA nominated Bumping the Odds for BBC and Dr Who – how do you find writing for the stage different from writing for the screen?

I love writing for film but in film all the decisions have been taken before the audience arrives. Their attention is managed and directed to what is significant by shot selection. A soundtrack attempts to guide their emotion, they see one performance and it will always be the same. Live theatre is always going to be that, live, and an audience will always be a living, active part of every performance as their responses affect what is happening in front of them. Writing theatre may mean you are limited in what you can show or how you show it but you have the real and ancient thrill of making something that will be alive every night, having that direct conversation with an audience.