Fashion in the 1980s: too outrageous for the stage? 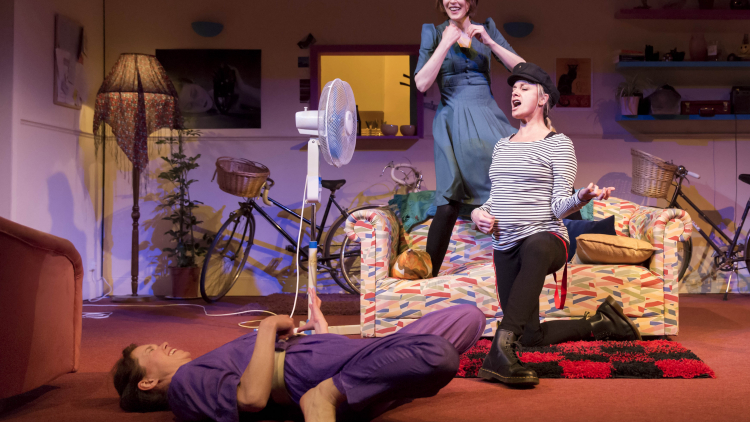 Fashion in the 1980s: too outrageous for the stage?

‘Proper 80s fashion is so over the top that you have to tone it down for the stage, because otherwise it can look too comic,’ says Jackie Orton, Costume Supervisor on Di and Viv and Rose.

She is sitting in the airy rehearsal room of Hampstead Theatre, talking to Sonnet Stanfill, Curator of Fashion at the V&A. Stanfill has just finished writing and editing a book for an exhibition opening at the V&A in June 2013, called From Club to Catwalk: Fashion in 1980s London, and she has come to compare notes with Orton on the trends of the decade. Miscellaneous props and items of clothing from the show surround us. There is an unexplained (real) handsaw amongst the debris on the table, but the women are having a ball reminiscing about the era of big hair, bows and knickerbockers.

Di and Viv and Rose, written by Twenty Twelve actress Amelia Bullmore, and starring an award-winning cast of Anna Maxwell Martin, Gina McKee, and Tamzin Outhwaite, charts the enduring friendship between three women, who first meet at a northern university in 1983. Fashion features significantly in the play, not just in terms of the costumes of the actresses, but also because Gina McKee’s character, Viv, is studying fashion theory as part of a sociology degree. The play shares a lot of common themes with the exhibition.

Stanfill explains how the idea for staging the show, From Club to Catwalk: Fashion in 1980s London was sparked when Professor Wendy Dagworthy, Head of Fashion at the Royal College of Art, approached the V&A, and suggested it would be a good time for the decade to have a moment in the spotlight.

The museum has one of the largest collections of Vivienne Westwood in the world – approximately 30 Westwood corsets from the 1980s alone – and much of the archive has yet to be displayed. Corsets were a big 80s ‘underwear as outerwear’ trend of course, and in the play, Viv writes a paper deconstructing the iconography of the corset, identifying it as a mode of male oppression: ‘If a man can span his hands around a woman’s middle, he has her,’ claims Viv. ‘The waist is a male construct.’

Stanfill notes: ‘The 80s was indeed a time when the study of fashion history started to germinate, and a lot of the texts that I read twenty years later, were written in that decade. The subject of fashion history has since blossomed in colleges around the world, for example in the F.I.T in New York and the London College of Fashion.’

From corsets to stone-washed denim, two-tone hair and shoulder pads, Orton points out that certain strands of 80s fashion look like fancy dress to us now, and have to be toned down for the stage, because otherwise the clothes would distract the audience or make them laugh for the wrong reasons. To illustrate her point, Orton shows us a photograph of herself and her friends as students in the 80s. We all gasp. [see photo] The girls are channelling psychobilly with touches of Ultravox. It’s a strong look for everyday-wear.

Orton explains that when designing theatre costume for contemporary or recent periods, the audience should not normally notice the outfits the characters wear, and the actors must look like they have been living in the clothes. ‘You shouldn’t notice the clothes, unless it’s for the right reasons,’ says Orton. ‘If you notice it – there has to be a reason’.

Anna Maxwell Martin plays Rose, the character who is the most ‘pure 80s’. Even with her, Orton has had to tone it down, but she still had a lot of fun sourcing potential outfits from vintage shops for Rose’s wardrobe. She sees the period as the last time fashion made a real impact, stirring up passions – whether people loved or hated the looks. Luckily, Maxwell Martin was delighted with the costumes that were selected for her to wear.

In one scene of the play though, Orton is given a chance to use the outlandishness of the decade to fabulous, comedic effect. The piece of clothing she chose is something that would have been worn without irony in 1983, but raises a delighted reaction from a contemporary audience.

In some ways period costume is easier to put on the stage than contemporary or near-contemporary, Orton explains, as cast and audience tend to know less about, for example a 16th century dress with paniers, than something that they would wear themselves, and therefore they tend to be more accepting of period costume.

Sourcing genuine, vintage 1940s dresses for Gina McKee who plays Viv, and begins the play looking like ‘Mrs Miniver’, was more challenging says Orton, not only because women’s body shapes have changed so much since the 1940s, but also because vintage clothing in good condition from that era is rare. Sonnet Stanfill, explains that this is because the concept of ‘vintage’ did not take off until the 1980s.

Quoting Michael Kostiff, who co-hosted at 80s club Kinky Gerlinky and sold vintage-clothing at Antiquarius market in the King’s Road, Stanfill says, ‘People only thought about these as “dead people’s clothes” before that, so clothes from earlier than the 1950s do not survive in great quantity because people did not keep them or value them’.

Rifling through second-hand clothes stores to make up your own look was part of the trend for self-expression and individuality that exploded onto the 1980s London fashion scene. In her 1998 book, British Fashion Design, Rag Trade or Image Industry? Angela McRobbie describes how looks, deriving from street market stalls, from magazine inspirations and from sewing–machines in student bedrooms, were paraded in nightclubs and quickly discarded. McRobbie argues that it was this phenomenon that truly reflects British fashion throughout the decade, more than a formal history of the established British designers of the period would demonstrate.

The forthcoming exhibition at the V&A will be in the spectacular Mezzanine space of the new Fashion Galleries and will showcase and celebrate this aspect of performance in the London scene at the time, incorporating music and video as part of the exhibition’s presentation.

Stanfill describes how parading one’s do-it-yourself outfit in the clubs was a big part of the convergence of the fashion and music scene. In the book Style City: How London Became a Fashion Capital (2009), Robert O’Byrne and Annette Worsley-Taylor describe how the New Romantics movement forged links between fashion and pop music. Westwood’s first runway show in 1981, ‘Pirates’, was promoted by Malcom McLaren’s band of the moment Bow Wow Wow, and clothes from the collection were also seen in Adam Ant’s video for ‘Stand and Deliver’. Leigh Bowery, an Australian performance artist, began designing club clothes for his friends, eventually becoming a catwalk designer, and opening his own club, Taboo, in 1985.

Stanfill describes how many of the outfits the V&A will showcase are sexually ambiguous, such as a flamboyant and beautiful men’s white jacket for dancing, designed by Bowery, with draped ruffles on the sleeves, which open to form angel-like wings. When Orton was putting together a wardrobe for the character Di, who is a lesbian, played by Tamzin Outhwaite, she had to dress her in androgynous, sexually ambivalent clothes, but not in a flamboyant, New Romantic way, because Di’s personality is sporty and sensible. In the college scenes, Di is mostly seen in workout gear, but later she wears business-like outfits that indicate a job in a conventional environment.

Key pieces by Galliano are also featured in the V&A’s From Club to Catwalk show. The designer, who studied at St Martin’s School of Art from 1981 to 1984, is quoted in Style City: How London Became a Fashion Capital, as saying that on Thursdays and Fridays the college was empty because everyone was at home making outfits for going out on the weekend.

Sonnet Stanfill sees the strength of art and fashion colleges at the time as key to the explosion of creativity in London fashion. She says the culture was to work hard and play hard. The colleges were also places where different creative disciplines mingled and provided inspiration for each other. Jackie Orton describes how her Nottingham art college had many subjects such as furniture design, theatre design and sculpture under one roof, and students often collaborated on projects. Stanfill sees this as partly explaining the occurrence of collectives and collaborations during the ‘designer decade’, which sparked teams like the influential duo behind BodyMap, Stevie Stewart and David Holah, whose work will also be showcased in the V&A exhibition.

Ground-up collaborations also inspired the production of new lifestyle magazines like The Face and i-D, which featured street as opposed to designer fashion, and challenged the status quo of high-end fashion magazines. Stanfill describes the existing fashion press as ‘a closed world’, mostly promoting the coterie of designers who dressed Princess Diana and her set. In contrast, the first issue of i-D is quoted in Style City: How London Became a Fashion Capital as trumpeting: ‘Style isn’t what but how you wear clothes. Fashion is the way you walk, talk, dance and prance’. According to Angela McRobbie, these new magazines provided an arena for original, talented photographers, stylists and designers to be scouted by the commercial world.

McRobbie contends in her book that it was in the ‘designer decade’ that production of ‘niche marketed goods’, loaded with symbolism and imagery, gave rise to another phenomenon: the ‘consumption of images’ (of the niche goods) through the media and advertising, which became just as important as consumption of the real products themselves. Who could have predicted that this would become such a massive global phenomenon, powered by the rise of the Internet and digital production methods? These were still only futuristic dreams in the 1980s.

For students of the time, like Jackie Orton, dreaming of escaping to the big city, these magazines were a rich source of fantasy. In a similar vein, in the play, Rose describes how she has escaped life in her little village in the country with ‘all the curtains drawn’ by going to college in a big metropolitan centre. Orton and her sister kept a cuttings scrapbook of the things they loved and would buy if only they could flee to London and earn money. As Sonnet Stanfill confirms, ‘Fashion magazines like i-D and The Face were lifestyle, music and everything. They provided a voice for this ambitious 80s generation’.

Di and Viv and Rose is now on Hampstead Theatre Main Stage until 23 February 2013. From Club to Catwalk: Fashion in 1980s London opens at the V&A museum in June 2013.