#aiww: The Arrest of Ai Weiwei: ★★★★ from The Telegraph 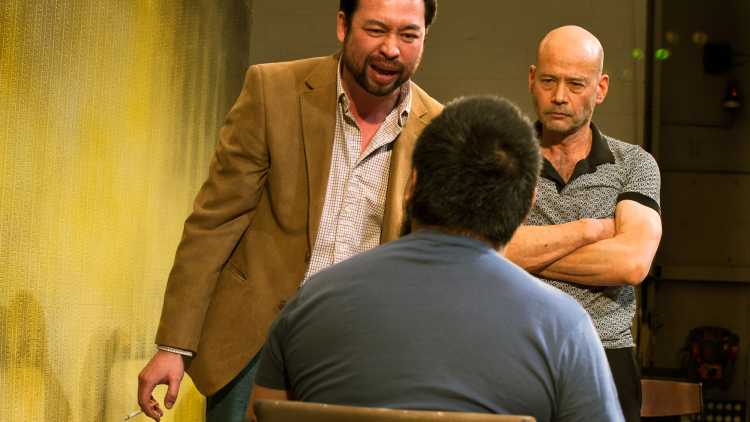 #aiww: The Arrest of Ai Weiwei review
By Charles Spencer, The Telegraph

Howard Brenton’s drama about the treatment of the artist Ai Weiwei at the hands of the Chinese authorities is clearly An Important Play. But it is also a very good play – moving, scary, gripping, inventive and at times laugh-out-loud funny.

It is based directly on the account this brave and thought-provoking artist gave to the writer Barnaby Martin about his arrest in his book Hanging Man. As a consequence it has a satisfying smack of authenticity. And that is just as well, for Weiwei’s experience was at times so surreal as to defy belief.

But it is impossible not to warm to Weiwei in Benedict Wong’s remarkable performance. He captures the man’s fear on arrest, but also his warmth, wit and bravery. And Brenton depicts something remarkable that happened during the course of the interrogations. The tough, disconcertingly odd inquisitors began to warm to Weiwei, to respect him, and become interested in his art – a kind of Stockholm Syndrome in reverse, as the dramatist puts it in his preface to the play.

There are also fascinating scenes involving high-level government officials which suggest the confusion and fear they feel about dissidents in the digital age. How do you keep the lid on a population with access to the internet, Twitter accounts and mobile phones?

James Macdonald directs a gripping and ingenious production which captures the menace, fear and sudden moments of startling, surreal humour of the interrogation scenes. Meanwhile Ashley Martin Davis’s design makes the production resemble a modern artwork. The action takes place in a white cube, dominated by a huge wooden container of the kind used to transport cultural artefacts. It is then ingeniously transformed into two different sets, one of them slyly alluding to Weiwei’s Birds’s Nest.

This is a compelling play for today and it should reach a wide audience. It is being live-streamed for free tonight at 7.20pm on multiple platforms including hampsteadtheatre.com and youtube.com/hampsteadtheatre. No doubt Chinese government officials will be watching it with keen interest.