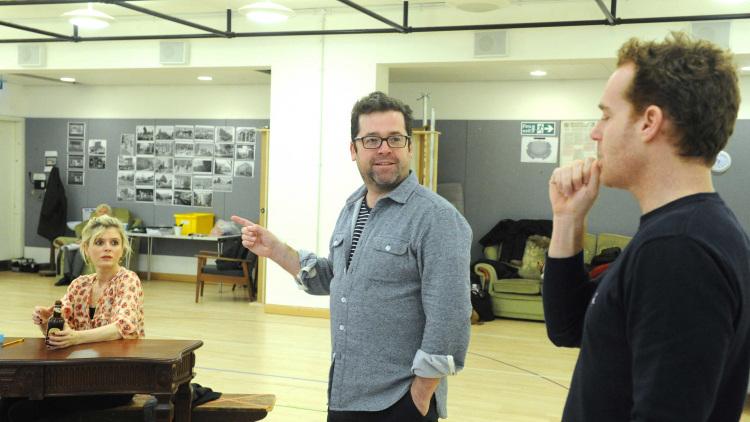 If you are wondering what the title of Hampstead Theatre’s new production Rapture, Blister, Burn might mean, you probably weren’t listening to Courtney Love in the late 1990s. When I catch up with director Peter DuBois during a break in the hectic rehearsal schedule, he explains that the phrase is a song lyric rather than a line from William Blake, who is also quoted in the play. DuBois is bolting his lunch and is very much in that all-consuming ‘rehearsal zone’. Artistic Director of Boston’s acclaimed Huntington Theatre Company, DuBois is a close friend of the play’s writer, Gina Gionfriddo. He directed the premiere at Playwrights Horizons in NYC, and the play’s two other incarnations at the Huntington and the Geffen Playhouse in LA.

It’s a provocative piece. DuBois describes how a man in New York jumped to his feet at the curtain call shouting ‘thank you, thank you’. Although DuBois is not sure which aspect of the play the man was grateful for – perhaps the non-judgemental treatment of a porn-obsession – he wonders how Rapture, Blister, Burn will play to audiences in London. Already the British cast are savouring the cruelty of student rebel Avery’s lines more than they did in the US. Having worked with two different companies in the States, Dubois says that he was keen to break his own mould this time, relishing the opportunity to find a new cast in London:

‘Getting the right actors in the right roles is crucial. All of the actors here were my first choice – and that so rarely happens. Literally when each actor entered, the characters came into the room with them’.

For the pivotal part of Catherine, an academic ‘hot doomsday chick’, specialising in deconstructing pornography and horror films for the media, Emilia Fox has the necessary ‘rock star’ charisma for DuBois. Fox has said recently that she had been offered many opportunities to do theatre over the last ten years but no part resonated with her as much as Catherine: ‘an irresistible part to play because I think I know her’.

In the play, it’s a career that brings Catherine a degree of notoriety. As Gwen drily remarks to Don, people will pay to watch ‘a pretty girl talking dirty’. DuBois recalls how he and Gionfriddo were fascinated by a mini-skirted, political pundit who garnered a lot of coverage during the Monica Lewinsky scandal by referring graphically and frequently to the sexual act that Clinton denied having. Indeed, the issue of sex raises its head, so to speak, in many different guises in the play, because as the character Don remarks at one point:

The sex thing. If you don’t shut it off when you hit forty, it’s gonna get messy.

Gionfriddo, has been compared to Jane Austen in that she works on a small canvas but achieves a multi-layered depth of portrayal. DuBois believes that Gionfriddo’s writing is inspired by fascination with human behaviour rather than the urge to take a political stand. He points out that the unpicking of gender politics in Rapture, Blister, Burn, Gionfriddo’s second Pulitzer nomination, constitutes a framework for the cross-stranded interplay of relationships between lovers, mother and daughter, husband and wife. When I ask whether it is hard to retain momentum throughout the academic discussions in the play, he explains how the debates generate and retain dramatic dynamism, because they reflect events in the characters’ own lives.

These inter-generational perspectives of the big choices women face in love, marriage, children and work often play against the characters’ presumed generational standpoints. Some of the most insightful and funny observations are given to Avery, the stroppy student-babysitter, played by Shannon Tarbet. When Gloria Steinem saw the play in New York, she claimed to identify most with Avery, who offers a pragmatic conflation of the ideology of anti-Women’s Lib commentator Phyllis Schlafly with a 21st century post-feminist sensibility, that wouldn’t call itself feminism.

The friendship between Gionfriddo and DuBois began on a postgraduate programme at Brown University, and has matured over the years into a fruitful working partnership. Their first project together, U.S. Drag, came about after DuBois heard Gionfriddo read from it in a playwriting class. DuBois then went on to direct Gionfriddo’s first Pulitzer nomination, Becky Shaw, both in the States and at the Almeida.

‘With Rapture, Blister, Burn Gina called me and said she wanted to write something about pornography… but then another play emerged about this woman Catherine, and the choice between career and family…What Catherine is most concerned about is realising she hasn’t recreated a family unit of her own, so that she can have a place to go to that she can think of as home, when her Mum dies.’

Gionfriddo’s approach is to chat through ideas with DuBois in the early stages, but then to disappear to write the first draft ‘in her own space’. They did several readings at Playwrights Horizons in NYC, and important facets of the characterization changed in this development phase. Catherine, Don and Gwen were originally written as being in their 30s but later Gionfriddo reworked the play to make them forty-something, and also changed the crucial aspect of Gwen’s complicity in Catherine’s return home. Gionfriddo visited rehearsals at the early read-through stage when any ‘blind-spots’ that DuBois might have could be addressed. As he says, ‘The writer can be more articulate about what motivates the characters’ choices at that point’.

DuBois describes directing as a collaborative process that nevertheless requires a ‘ship’s captain’ to oversee the disparate elements. Although writers desire different amounts of involvement in the rehearsal process, he feels that it’s important that at some stage the writer disappears – even Gionfriddo – so the cast can ‘experience the raw choice or the wrong choice’, and have the freedom to experiment. With any worthwhile comedy, he says that it is crucial to build the emotional ‘basement to the house’, in other words the emotional substructure that underpins the action: ‘their needs, their wants, their desires, their conflicts’. Without this, the comedy can feel slight or brittle. When this emotional bedrock has been established, the actors can ‘put the funny back in’ in terms of the technical aspects of timing and delivery. He describes the free-ranging stage as almost like presiding over a kindergarten, in allowing the cast to play and to make mistakes, or at least take risks.

DuBois views his career path as unconventional, but agrees it has delivered an exceptionally diverse breadth of experience. He began it all by directing ‘ridiculous’ plays as a 5 year old in his mother’s wigs in the back garden. After college, he moved to the Czech Republic where he started a squat theatre with a group of students. Later he followed a postgraduate programme in theatre history at Brown University, where he not only met Gionfriddo but also playwright Paula Vogel, an inspiring figure who suggested he apply to run the Perseverance Theatre in Alaska. He spent five years in Alaska before landing the job of Associate Artistic Director at the Public Theatre in NYC, where among many other acclaimed productions he directed Philip Seymour Hoffman in the applauded Jack Goes Boating.

Now Artistic Director at the Huntington Theatre Company in Boston, a non-profit organisation affiliated with Boston University, DuBois says their programming shares similarities with Hampstead Theatre. New writing is at ‘the heart of the enterprise’ but they also stage revivals, and re-visit classic texts. He mentions that when the Huntington polled its board members to see where their priorities lay, new writing and the development of new artists emerged as their leading interest. For him, the drive behind staging new work is the real excitement around finding the next great piece of writing, the next Rapture, Blister, Burn.

‘New writing is really the lifeblood of the theatre,’ says DuBois. ‘That’s the only way to keep the conversation alive’.